not to brag but i’ve always been mistaken for something waaay younger than my actual age. i’ve had people guestimating me to be around 18. some were more generous with their allowance.

when i’m not wondering if we’re on the same page as far as the definition of early is concerned, most of the time i take it with a grain of salt and a wee bit of smugness — it must be the smoothness of my skin. the youthfulness of my features. the “liquid brown eyes” which were the exact same words written on my high school year book to describe them. the same ones girly once said she would love to preserve in a formalin-filled jar as a table accent or a sick piece of artwork to satisfy her inner interior designer.

i could flatter myself on and on but the brutal truth (and the closest bet i could ever get) has less to do with my complexion and more to do with my, um, cleavage. hahahaha. i know, i know. this time, we’re definitely on the same page here. all together now: WHAT CLEAVAGE?! lol.

but for the record, i am in my early thirties. which puts me somewhere around 38 or 39, if we follow the aforementioned people’s logic. jeff asked me what it feels like to be in this age i am now.

“same feeling you felt when you were in this exact same age 2 years ago.” touché.

as far as i can remember, i’ve never been a big fan of my own birthday. it’s just another one of those days, you know. the only special thing about it is that i was born on the 10th of the 10th. which i think is pretty damn cool. not to mention that the first letter of my name is the 10th letter of the alphabet. plus, i have 10 toes and 10 fingers. if that’s not auspicious enough, then i don’t know what is! (i also obviously have the mental reasoning of a 10-year old.)

and because it’s just another day for me, i don’t really feel the need to celebrate it. the only time i did was when my dad invited my friends and relatives to surprise me with a party. it being a 10/10/10 which happens only what? once in a thousand years? other than that, nothing. (although he always manages to come up with surprises for me. tries to make it special somehow. shout out to all the best dads out there!)

this year, for some reason (god forbid it’s an ominous one), i felt like celebrating. nothing grand. just a very simple brunch with the only friends i have. (guys, don’t die on me, okay? at least not at the same time. lol.)

with advancing age comes wrinkles you never saw before, as well as several changes in your lifestyle. whereas before we would have made a beeline for a little videoke and whole LOT of beer session for a night of alcohol-induced insomnia to “morning the night away,” things are so much more tamer now.

i mean, come on, we had a fcking brunch. BRUNCH! (like hell we enjoyed that one too. it amazes me the way people adapt to life sometimes.)

so, yeah, in lieu of a set of ice cold beer in buckets, we had coffee afterwards. well, they had coffee. i had a tall cup of cold kumquat & lemon tea which, ironically, still had the same effect on my bladder as beer. only maybe healthier. that is, if they didn’t pour a whole kilo of sugar in it.

so that was how the rest of our afternoon went. drunk on coffee, tea, and girl talk. while looking at our toenails. 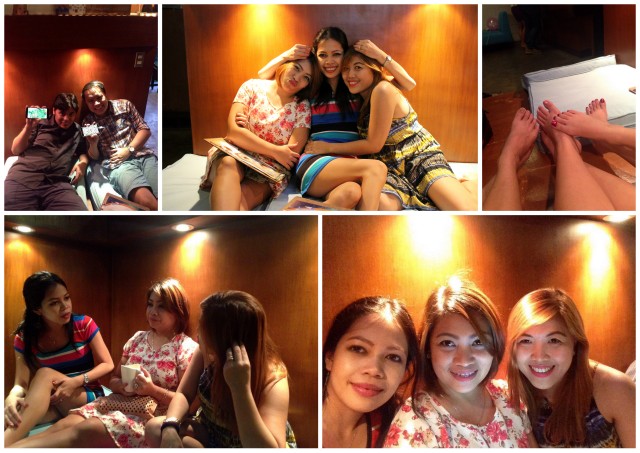 but the icing on the cake that greeted me when i got home?

i don’t usually get girly girly over flowers but that night, i surprised even myself. my vocabulary was temporarily reduced to just “awww….” because it was a gesture i never expected from a guy whose idea of a perfect date probably includes strolling hand-in-hand through the romantic aisles of JB hi-fi; eyes lighting up over the sight of computers and wires and cameras and lights and flashes and everything electronic gadgets galore. except for e-book readers. that’s the aisle he never finds himself in. unless he starts looking for me because chances are, i’m there.

it was the card that really got to me, though. there’s nothing syrupy about it but those three names on the bottom?

that’s my family right there.

p.s. to every one who wished this old lady a happy birthday, thank you. =)

16 thoughts on “a belated birthday brunch and a sunflower surprise”