“What the fuck am I doing?” I chuckled to myself as I donned my wedding dress, the lace weighed down by sequins, mud, and time.

I should’ve had this dry cleaned. The dirt on the hems of my skirt had already settled. Like I have, in my marriage. Now we both look like we belong there, in our respective places. Except that the dirt is just dirt but I am, at least, given the liberty to doll myself up with makeup to disguise my flaws.

I’ve changed a lot in our relationship. Where before I was meek, I have now become feisty. Bitch would probably be the word Jeff would go for and we’d both laugh because he’s not entirely wrong. I guess I just learned to stand up for myself and the best thing about it is he gave the dragon in me room to grow, a regrettable outcome for all his best intentions.

I’m not that bad. The reason I used dragon as a metaphor is because they’re purely mythical. But popular enough to have you believe of that 0.00001% chance that they could, you know, maybe exist somewhere out there. Same way you believe in aliens. Which is not to say that I can’t be a bitch when I need to.

Other than that, I’m a fucking llama.

Anyway, thank god the dress still fits! It’s a beautiful dress made more meaningful by the fact that I spent long hours poring through the internet for inspiration before sorting out the details with my seamstress.

White was out of the question. Too cliché. I was leaning more towards ivory and long sleeves for the practicality of it being an autumn wedding. I didn’t want a big dress, either. I wanted to be elegant; not a princess.

I also managed to do away with heels. I don’t normally wear high heels in real life and I definitely wasn’t going to attempt it on my wedding day. No way. I wanted to be true to myself, you know. And if I had been any more truer, I would have preferred we eloped but, oh well. Shit happens.

Now, for the price tag. Including labor and material, my wedding dress cost me only about Php7,000. Converted to Australian currency at the time when the Aussie dollar was strong, that would be around A$200. The perks of being Asian and having a mother who has ties to a really good seamstress who gave me such a thrill whether or not she would finish the dress on time because she was also unreliable as hell.

And if you were to ask me why I married Jeff, my answer would be… I don’t know. So simple, and yet so profound. Three words that tell you nothing and everything at the same time.

But he supports my crazy, and that’s a big chunk of the why.

“In one year’s time, you’ll be in a circus,” Jeff said to me last week. He was making himself tea. I was studying the Six of Swords. “You’ll be there reading tarot cards and I’ll be the midget at the entrance of your tent calling everybody in!”

And that, my friends, is why I’m with him.

And also because he takes awesome pictures of me. For free. 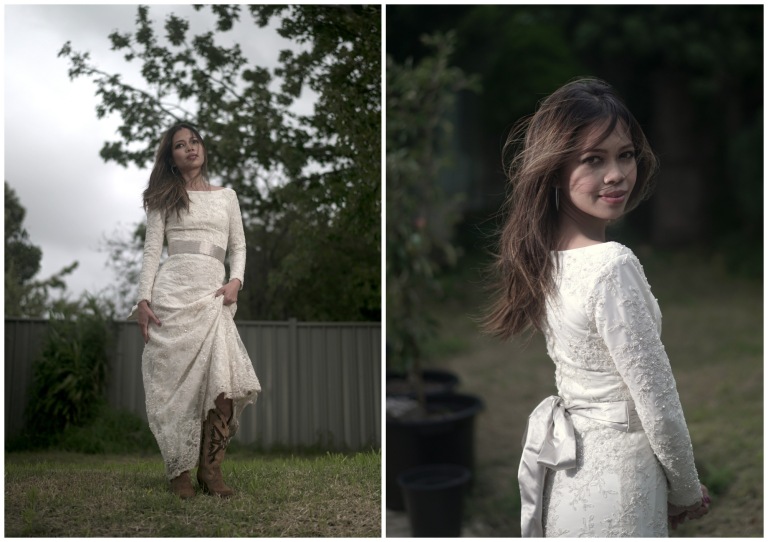