i was probably more excited than raven was. i mean, when you’re halfway through your life without ever having experienced what it’s like to go hunting for colorful plastic eggs in exchange for chocolate ones because your childhood was spent celebrating easter at church minus the bunnies and the candies, you can’t help but feel a little bit giddy.

okay, sure, quietly hyperventilating as well but with my age, i can’t let on my childhood deprivation. all things considered, i reckon i managed to grow up into this mature, well-rounded individual that i am right now.

“hahaha… look, jeff, the blowup bunny looks like he has ball sacs!” i pointed to the huge inflatable easter bunny flanked with what was supposed to be easter eggs on either side of him to welcome everyone to the egg hunting section of the melbourne easter show held at the cranbourne racecourse.

$12 got us a borrowed bucket to fill eggs in and then later, a handful of chocolates in exchange of the said bucket already filled with plastic eggs. as it was a toddler group, one parent was allowed to accompany the child inside the fenced area. the instruction was simple: fill the bucket with eggs of the child’s favorite color. whoever finds the gold egg wins an extra prize.

i knew it was supposed to be a fun, family-friendly activity.

i knew you were not supposed to take it seriously because it’s not the freaking olympics, for crying out loud!

but omg, there i was furtively scanning the grass for any signs of the winning egg. but nope, i didn’t see any. so i moved on to my next strategy — race my horse to the finish at top speed. which meant actively cheering raven on to fill her bucket up quickly but without any pressure on my end because i didn’t wanna be that parent, you know what i mean?

raven took her sweet, sweet time. “ooh, a yellow egg!” she would coo, bending down slowly to pick it up and study it in her right hand, the bucket still empty on her left.

my own kid was trying to kill me.

forget horse race. it felt more like a turtle race to me.

in the end, i gave up and just let her be, even when she was putting in all different-colored eggs. who cares? the rest of the kids were going at a much slower pace anyway and i have to say raven was pretty fast in collecting those eggs. i just hope she had fun in the process too, something i missed in the beginning because, you know, asian.

which is a lame excuse considering how there were heaps of other asian parents there as well, just chilling.

next year i promise i’ll be less intense. cross my heart and hope to die. the handful of prize chocolates weren’t worth a heart attack.

surprisingly, melbourne easter show was actually a pretty big event. there were all these different rides and games and food stalls and what-nots. the usual money traps you’d find in a fair with families with kids on school holidays in mind.

this kid (read: me) wanted to go on a camel ride. jeff used to work with camels before. he said they stank. he was the one pulling the camel by the reins giving folks a quick tour around the enclosure. needless to say, his enthusiasm to ride on one was off the charts.

maybe next year when raven is big enough to join me. jeff can take our picture, as per usual.

raven had her first face paint done if you don’t count the one where we DIY-ed it at home but that was pretty cool too. we were going for the jackson pollock look.

she did really well, sitting still throughout the process. i kind of expected her to jump out of her chair in boredom or move around a lot with the little bundle of energy that she is. but she did a fantastic job in cooperating. and i guess it helped that the face painter was speedy but efficient in her work as well.

raven loved her face paint. she slept with it later that night. didn’t wanna wash it off. 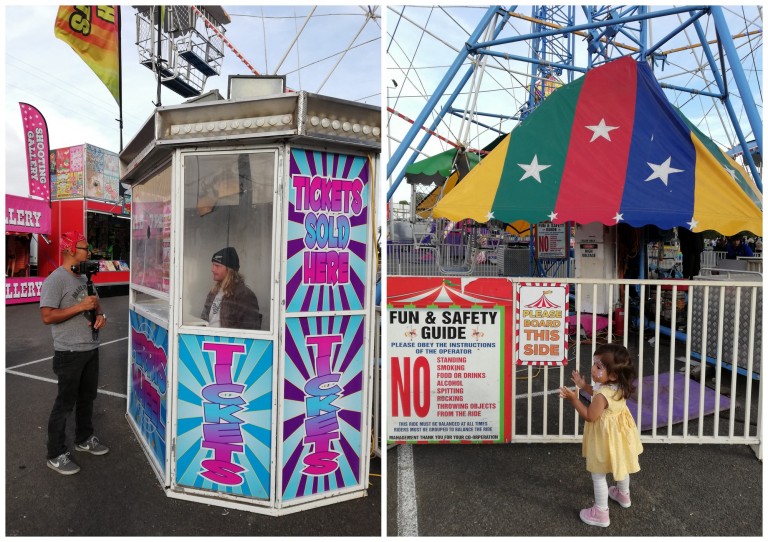 at the end of the day, before going home with no more money left to pay the mortgage, jeff bought us ferris wheel tickets from a guy who looked like he should be selling dave grohl concert tickets instead.

ferris wheels remind me of my mom. that one time she took me and my younger sister to ceboom! after school, spinning around and watching cebu’s limited skyline in our uniforms. a 3-second memory that never fails to warm my heart. as strict as my mom was, she did fun things with us too. in fact, she was the one who took me and maybe my 10 other cousins to the circus, carrying a big tupperware full of hotdog and cheese waffles for snacks.

i have a sneaking suspicion i inherited my random quirks of rebelliousness from her.

that was raven’s first ferris wheel ride as well. come to think of it, this day was a lot of first’s for her! wow. as a parent, i feel proud to have given her the experiences she had on this day. she might not remember them 10 years from now but i will. and if i don’t, jeff’s video will remind me; and of why i hate videos in the first place because i look so fugly in them.

which is how i look in real life as well, except that videos sort of cement that status.