as surreal as it is to be featured in the city of casey’s arts magazine, my first reaction was:

“oh, wow, so that’s what my new family name looks like in bold, black and white print!”

because as happy as i am to take on jeff’s family name, i haven’t really started using it since we got married. i’m still waiting for the release of my passport which i renewed last january which will officially reflect the change of my surname before i start going through the migraine-inducing process of submitting all the necessary paperworks to various government agencies to legalize the changes.

so, yeah, i tell myself at least i’m doing his name justice and be described as an “artist” in a local arts magazine rather than an “assailant” in a national newspaper.

anyhow, if you really wanna know how i got featured in there, let’s just say that i once joined this creative writing workshop sponsored by the city of casey which i told you about here and here, if you’ve been following my blog — either by accident or intent doesn’t really matter. that was in june of last year. about a month ago, i received an email from tanya smith of the city of casey asking if i would be happy to be featured as a local artist in their autumn 2016 edition of arts news.

i’m not gonna lie. as flattering as the offer was, i couldn’t help but wonder if they ran out of people to feature because, you know, i consider artists as those the likes of jeff who can draw and make music and are creative as hell. sure, as in the case of jeff, he might come off as different sometimes but it’s the cool kind of different, you know what i mean? (lol. i’m just teasing. i love that guy!)

i, on the other hand, am just plain weird. which, upon further reflection, probably makes me the ultra-concentrated kind of cool. not to mention delusional. 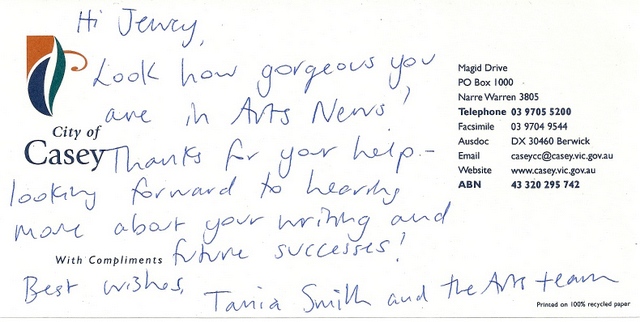 the same day i received copies of the magazine by post with this note attached was the same day i received another special kind of note from the city of casey later in the afternoon lovingly tucked on my windshield wiper. in the form of an infringement notice. $91 for wanting to park away from the heat and the sun on a spot which happened to have a sign that read “new parking restrictions enforced” or something to that effect which i was totally too blind to notice while parking in reverse.

“ditche, mahala diay magparking sa landong dinhi noh?” my sister joked. that cracked me up. yes, apparently, you pay a high premium here for parking in the shade.

parking fine aside, i wish to thank the city of casey, as well as to tania and to the arts news team for the privilege of featuring me in their magazine. i really appreciate it and  am beyond grateful for the recognition. =)

here’s the full, unedited version of that interview:

Tell us a bit about your writing practice….

I’ve been writing for as long as I can remember – short stories whose characters died along with my patience, corny poems that would never see the light of day, random epiphanies jotted down on whatever scrap of paper I have within reach only to end up in rubbish together with the candy wrappers in my bag.

But if there’s one thing I have been consistent with for the past 20 years, it would be journaling. (I just did the math to come up with that number and have come to the conclusion that either my calculator is defective or I’m pretty much ancient because 20 years plus the rest of my actual age sounds so jurassic.) There’s something about it I find therapeutic. As if all the zen in the universe is compressed into those moments of hearing and seeing the pen glide smoothly across the pages you mindfully fill which, in turn, makes you mindless of time.

It wasn’t until 2007 that I started blogging online. Back then, blogging wasn’t all it was cracked up to be. Everyone didn’t want to be bloggers. It wasn’t like a cool lifestyle or anything that gave you bragging rights so you can then advertise yourself and ask people to follow you.

At least, it was never like that for me.

I blogged for posterity. I still do. I share bits and pieces of my life in the hopes that one day, my grandkids would read them and think I was a very cool grandma back in my heydays. (Yeah, baby!)

As a personal blogger, any given day can be just as typical as everyone else’s. Except that some highlights of the day’s events are saved to memory and become recycled material for blogging purposes. (Like that time my husband choked on his taro blended ice pearls which sounds morbid if you read it like that but the circumstances around it was actually quite hilarious we were still laughing about it the next day.)

What events or projects in the City of Casey have you been involved in?

To be honest, I never really saw myself as “a writer.” Simply put, I just happen to be somebody who likes to write. So when I found out that the City of Casey was holding a creative writing workshop for their Winter Arts Festival last year, I was like, “Yeah, why not?”

And so I went. And I met all these wonderfully creative writers who told me that I, too, had it in me. You know, that oomph. They were very supportive and encouraging. I remember just sitting there listening to them sing praises to something I wrote in less than 30 minutes during one of our writing exercises and all I could think was, “Wow! It’s amazing how they could still make out the words that I said!” Because I’ve never read my writing out loud to anyone before, let alone a group of people I just met, and my voice was shaking so bad I could barely even hear myself with the loud thumping of my heart getting in the way.

What are some of your highlights or proudest achievements of your career so far?

As far as blogging is concerned, in 2014 my blog won the Best Cebu Personal Blog. I know, I know. Not everyone has heard of Cebu and it’s in woop woop for all they care but for those who do care, Cebu is one of the 7,107 (low tide) islands of the Philippines. A paradise for those who call it home.

What advice do you have for writers starting out or young people interested in writing?

I’m usually not one to dispense advices about writing considering that half the time I don’t even know what I’m doing or if my grammar is flawless but if there’s one thing I can confidently dish out without choking on my own words, it’s this:

At the end of the day, write for yourself. Write, because it makes you happy.

Do you have any upcoming projects you would like to tell people about?

For a long time now, I’ve been thinking of incorporating a food review of the restaurants in and around Melbourne in my blog. As my husband is a photographer, his skills could definitely come in handy. But for some reason, we always find ourselves staring at our ravaged plates before either one of us realizes that “oops, we should have taken a picture of it before, right?”

So, no. No upcoming projects for now because I’m always starving.

How can people read more of your writing?

Catch your breath with me at thepausesbetween.com. =)

16 thoughts on “i guess this officially makes me an artist now, hey?”