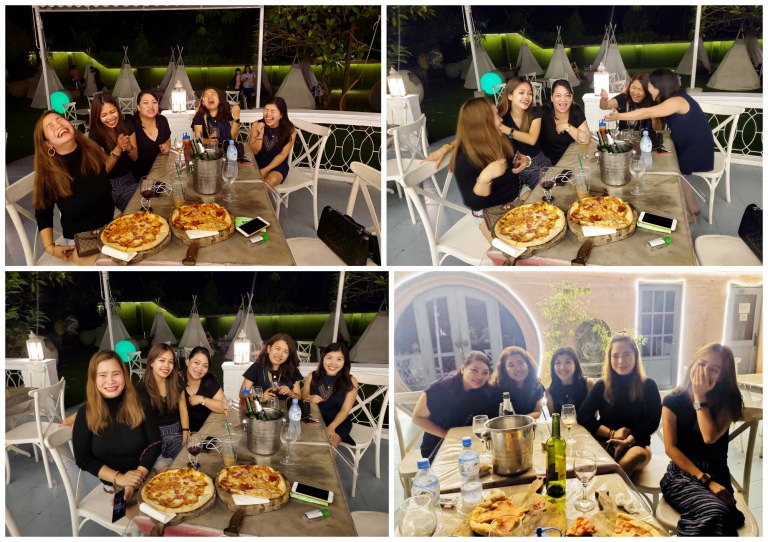 You would probably have hated us if you were seated right next to our table.

Something we tend to become the moment we all get together. Same way the Power Rangers transform into Megazord when all their powers are combined on a very limited production budget.

The Girl from the United States of America shouted us two bottles of wine and a couple of pizzas on this night. We really didn’t plan on going to La Vie Parisienne, Cebu’s premiere French bistro with its beret-wearing staff who gladly punched in our orders. We just kind of drove to the city and let our indecision guide us as to where we ought to be. We could’ve ended up drinking Red Horse on the sidewalk and I wouldn’t have cared. It’s never about the destination when I’m with these freaks. The ride with them is just as fun. As long as Jelven’s driving.

So, anyway, there we were queuing up at the counter pretending to be as cultured as the patrons holding polite conversations under chandeliers of soft low lights. Girlie said to order foie gras but none of us knew how to pronounce it so, yeah, we asked for pizza instead.

I’m no wine connoisseur but the ones we had that night were actually pretty decent — decent enough to get us drunk enough without making a fool of ourselves any more than we do when we’re sober. I don’t know about Shirley, though. That girl was off her rocker and friggin’ dragged me down with her. She’s the kind of chick you’d wanna be drinking buddies with, I kid you not. She’ll have you in stitches. That is, if she doesn’t ghost you.

I have to say this was a very fun night. I haven’t laughed that hard for that long in such a long time. It was exactly the kind of therapy my soul needed, especially after crying my eyes and my heart out for the last two weeks.

See, that’s the thing about human emotions. It’s weirdly fascinating how you can be grieving inside and yet still manage to laugh as if the hurt isn’t there. As if you didn’t just bury the most wonderful man you knew and loved two days before.

Maybe that’s how we’re all still able to function in spite and despite of. It’s how the world still turns even though it feels as if we just spun off our own axis.

And it’s exactly during those times that you need your tribe more than ever.