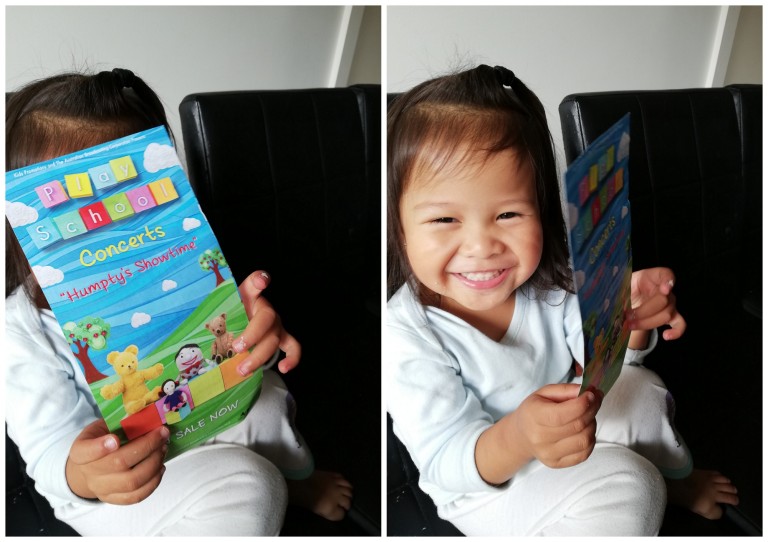 for almost a month, it was something she eagerly looked forward to. the flyer stuck on the fridge, well within her eye level, reminded her each time.

“i’m going to the play school concert!” she’d squeal, her eyes shining with glee as she does this happy dance of shaking her little booty while holding both her index fingers up in front of her.

“me four!” she’d reply, and we’d go back and forth counting up the numbers until she gets stuck at twenty because that’s as far as she can go. and even then, she still misses a number here and there which is fine with me. she has her whole life ahead of her to work that out. i’m not particularly worried. no rush.

to be honest, it wasn’t until two weeks ago that i actually purchased the tickets. she’s gonna hate me when she’s older and she finds out that i let her go on being excited about something whose probability of turning into reality was as hazy as what i actually wanted to be when i grow up.

like that time i let her hopes up that we were going to ride the train to the city to go check out the mickey mouse exhibit at melbourne central.

she still brings it up, thinking we’re still going even though that exhibit already finished a month ago. i still continue to apologize for not having kept my word even though she’s just 2 years old and i am certain that in her heart of hearts, she has already forgiven me.

but this event i couldn’t dare pass up. partly because i know she’d enjoy watching the show live just as much as she enjoys watching it on tv. mainly because i’m guilty as and i don’t wanna be one of those people who keep making promises to their kids and breaking them just as easily.

needless to say, the last two weeks, she legit had a reason to be excited about because they took my money already. all i needed to do was to print the tickets myself to reduce my carbon footprint, which is really just a fancy way of me saying i was too cheap to pay extra for postage. 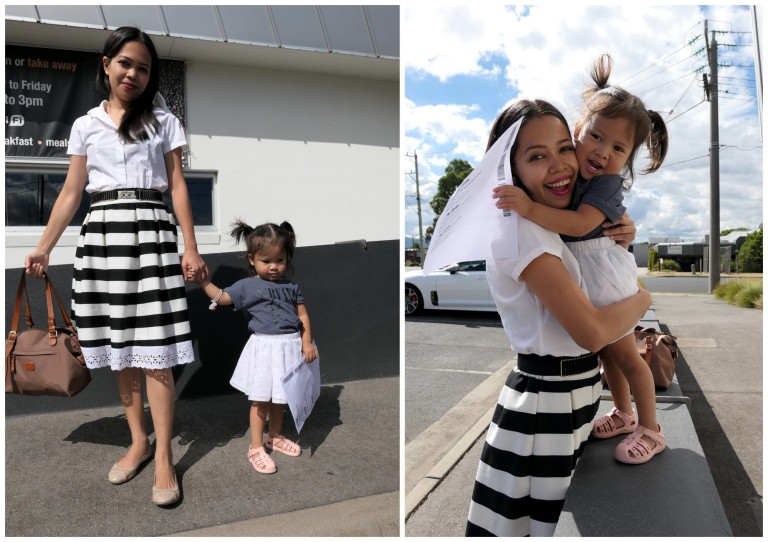 showtime was at 12 noon. the morning started out like it always does when we’re supposed to go anywhere important — stressful. raven lost the other pair of her runners and neither jeff nor i could find it. which wasn’t really surprising, considering how our house was pretty much under a state of calamity. in the process of our haphazard search operation, i found the other pair of her other shoe i was looking for the day before — in my socks drawer! as to how it got there, i can only deduce the obvious.

“look, mama, i like my bracelet.” she said, showing off her pretty hair tie hanging on her wrist. she only had one shoe on.

“raven, focus! help mama look for your other shoe, baby,” i pleaded. i was busy doing my eyebrows. because, priorities. if worse comes to worst, heck, this kid can go barefoot in public which is fairly acceptable. this is australia, after all. but for goodness’ sake, this mama cannot, would not, and will not go out rocking albino eyebrows. i rest my case. 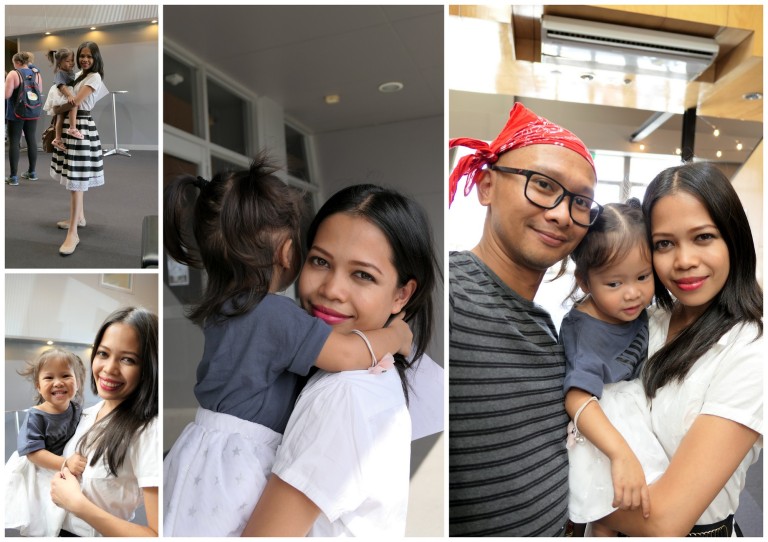 i’ll be perfectly honest with you. once in a while, i have serious doubts as to whether i got the whole motherhood game down pat.

today was one of those moments.

sure, the doors opened at 11:30am and yes, we were there on time. i got the tickets, i brought her water bottle, but… i didn’t bring any food. i thought her late breakfast would suffice until after the end of the show when i would feed her. and besides, weren’t we not allowed to bring food in?

i looked around and saw all these moms whipping out sandwiches and what-not from their well-stocked nappy bags to give to their little ones and there i was shrinking from my premature celebration of congratulating myself for remembering to bring her water bottle.

if motherhood were a race, i’d probably the last one to finish. bloody hell, i don’t even know if i’m running on the same zip code as these other women who are obviously naturally equipped to be mothers. like they were just born for it. you know what i mean? 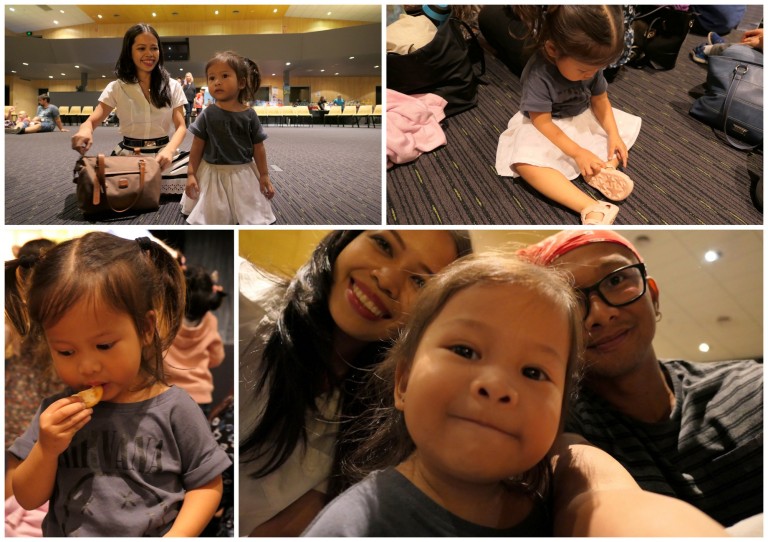 so i sent jeff off to get something for raven to munch on. poor guy missed the start of the show where everyone sang the play school theme song and raven was purely giddy and clapping like mad. it was the cutest! he did bring a bag of grapes and a punnet of strawberries on his return. i heaved a sigh of relief. raven happily munched on the biscuits he brought with him as well. some arnott’s savory biscuits i grab from work to eat in the car on the way home after a lunch-less shift.

i live a very glamorous life. 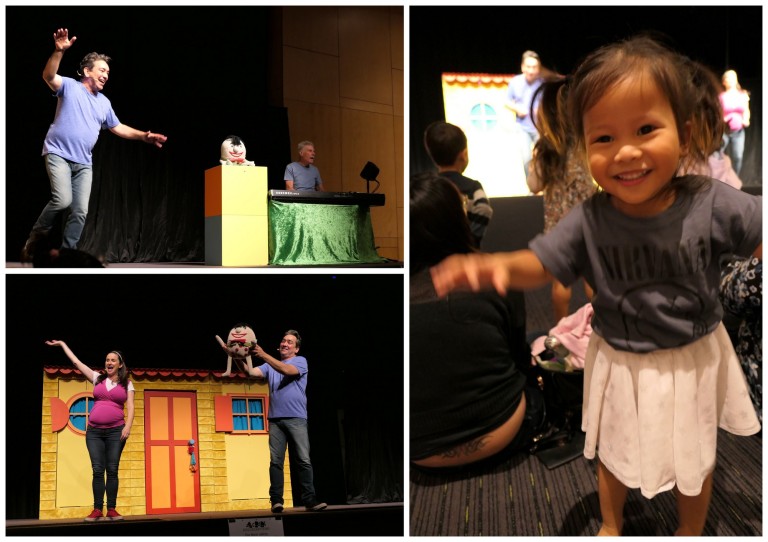 the moment jeff sat down and took notice of the actors on stage, the first thing he asked was, “is she pregnant?!”

anyway, the cast — emma (yes, jeff, she’s pregnant. 22 weeks.), alex, and even the very chill pianist whose name escapes me now — was brilliant! i quite enjoyed the show myself, actually. i especially enjoyed the little jokes they injected now and then which the adults found amusing.

raven had a good laugh when alex put on a yellow wig and a red nose, looking like a clown when he was supposed to look like a bear. she was in stitches over that one, i kid you not. took her a while to recover herself. 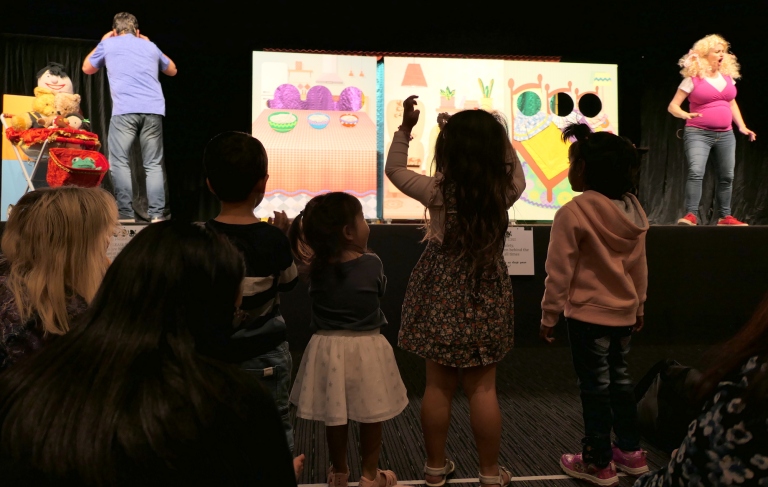 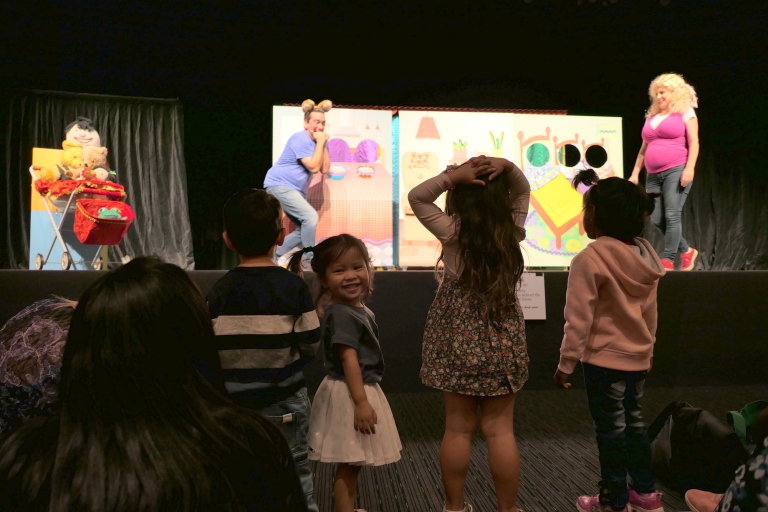 and i’m smiling as i write this. because watching her laugh like that made me want to cry. at that point, she was standing at the very front of the stage but she turned around to share her laughter and her happiness with us. that moment alone — priceless. 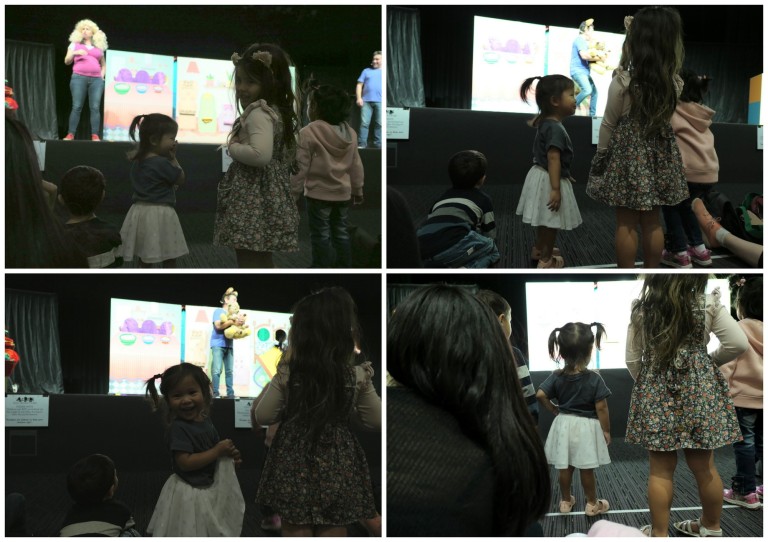 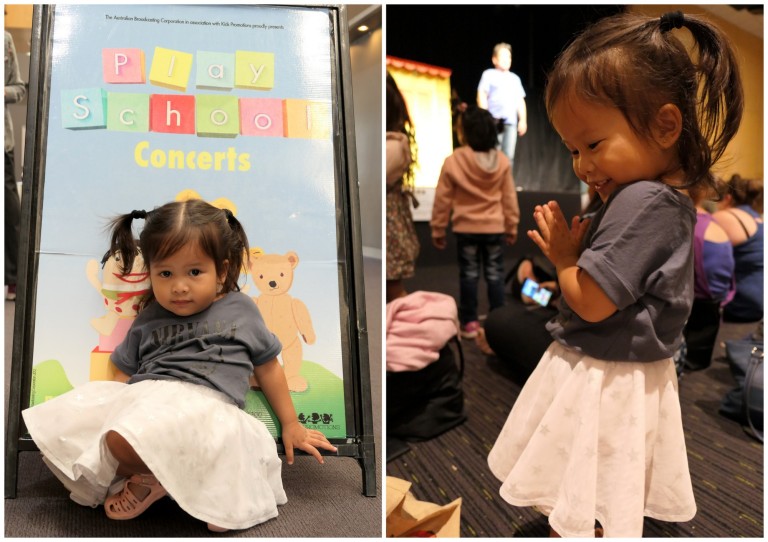 all in all, it was a really great experience. jeff and i were very happy for and very proud of raven. it was so nice to watch her jump and clap and interact with the world around her. we may not be able to give her everything but we try to give her the best we can.

kudos to all the parents there who spent labour day with their kids when they could’ve spent the holiday relaxing at home. 🙂