she wasn’t particularly fond of the bunnies the last time we were there. but then again, that was a year ago. she was just 1 & 1/2 years old and she didn’t have much hair, or words, then.

now, one year later, her hair has grown longer and thicker and it’s amazing the words coming out of her mouth as if all those months of talking and reading to her, she was passively storing all the information in her brain waiting for the perfect time to speak.

just as these photos were idly sitting in my hard drive waiting for me to get my sh%t together and be more consistent with blogging like i solemnly promised myself 5 years ago. yep, crossed my heart and hoped to die. but nope, i’m still alive and still, nothing. 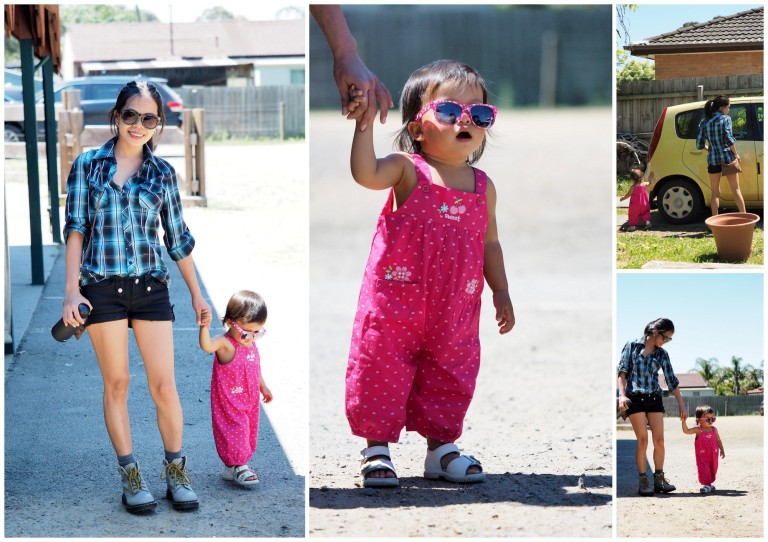 in retrospect, she might have been too young to appreciate myuna farm and its animals. but being the excited parents that we were, we thought we’d give it a go. so one sunny day in november last year, we loaded her in our yellow mitsubishi colt.

it’s dead now, that car. and it wasn’t until it was sitting at the mechanic’s and we went to collect our things that i realized it was actually a ‘she.’ it was a bittersweet moment. we had a good run. she taught me how to drive auto. and in her last couple of months, she taught me how to do a jumpstart. i just find it sad how her gender reveal came a little too late. 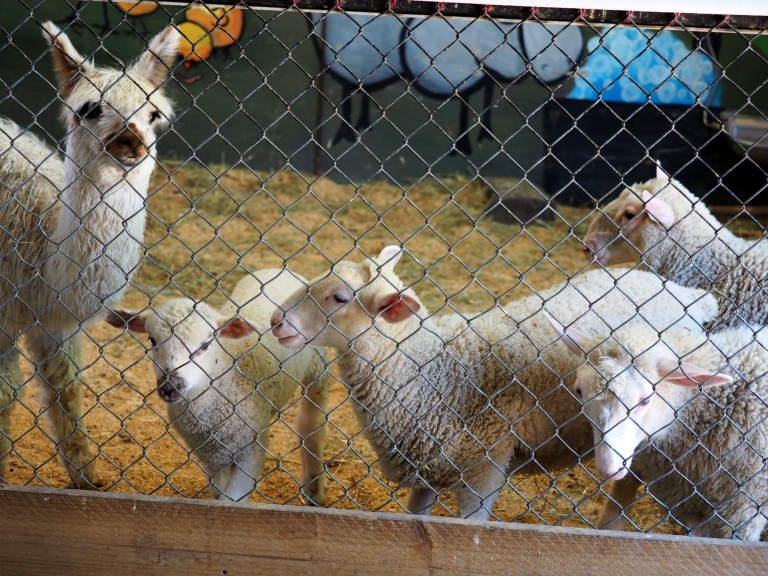 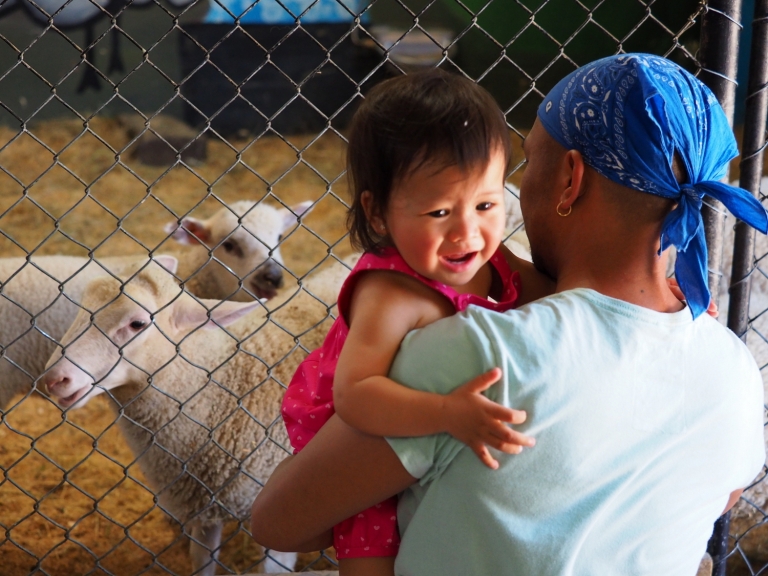 myuna farm, as the name suggests, is this little farm in doveton that’s got all the farm animals you can think of, except the cow. funny, i don’t remember seeing cows in there. or maybe i was too distracted by the llamas, caught in my own hysteria whenever i called out, “hey, jeff, look, it’s the dalai llama!”

i don’t know why he doesn’t find that funny. he’s weird. 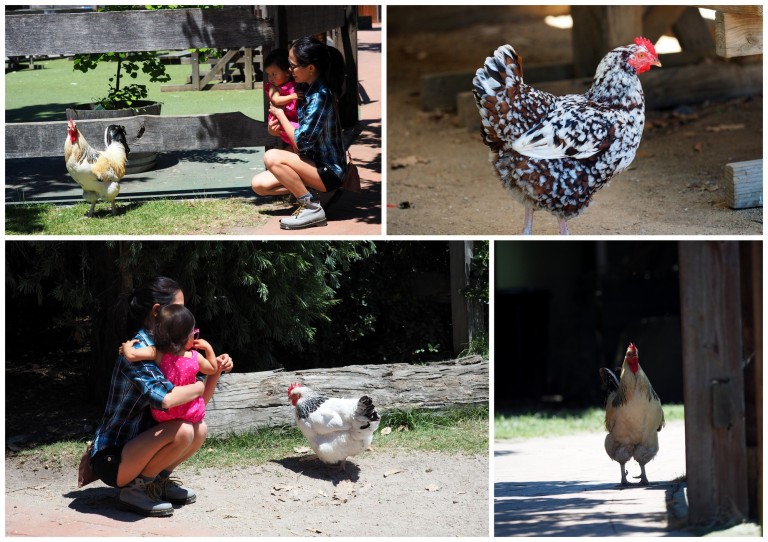 they have a pig, though. and chickens too. man, their chickens were next level! i mean, those motherf%ckers were aggressive! i remember sitting on the bench and those guys were trying to come on to me like crazy, pecking on my boots like i was chicken pellet or something. my precious dr. martens that seem to weigh a ton that if i have to outrun those chickens in those boots to save my life, chances are, the chickens will win.

but i still wanna get another one, in black. because i reckon wearing them is like me sporting a tattoo. i look like the badass bitch i swear i’m not in real life, depending on who you ask. hopefully not jeff. sure, he could be a reliable source but he’s too — how do i say this — emotionally invested, to be able to provide an objective opinion about me. also, he probably knows too much. that scares me. 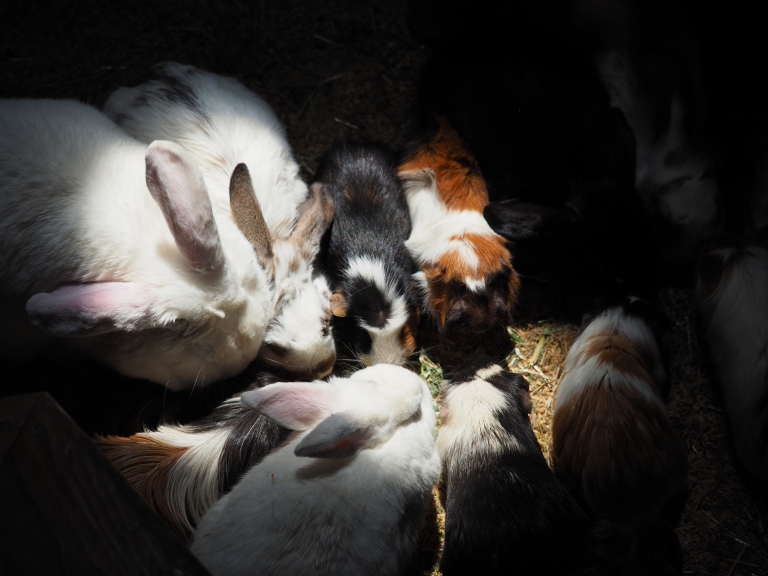 oh, they had bunnies too! the bunnies were my favorite ‘coz you get to go in the cage and cuddle them and overfeed them with the animal food that the staff hands over to you in exchange for the money you hand over to them as entry fee. they used to give guests a bag of abbott’s village bakery sliced bread to give to the animals before. i remember being torn between feeding it to them or making a sandwich out of it for myself because i like that brand. apparently, it was the donkey’s brand of choice too. i have the same taste as an ass.

they don’t give bread no longer. instead, we were given this small bag that had bits of dry grass and what-not in there. 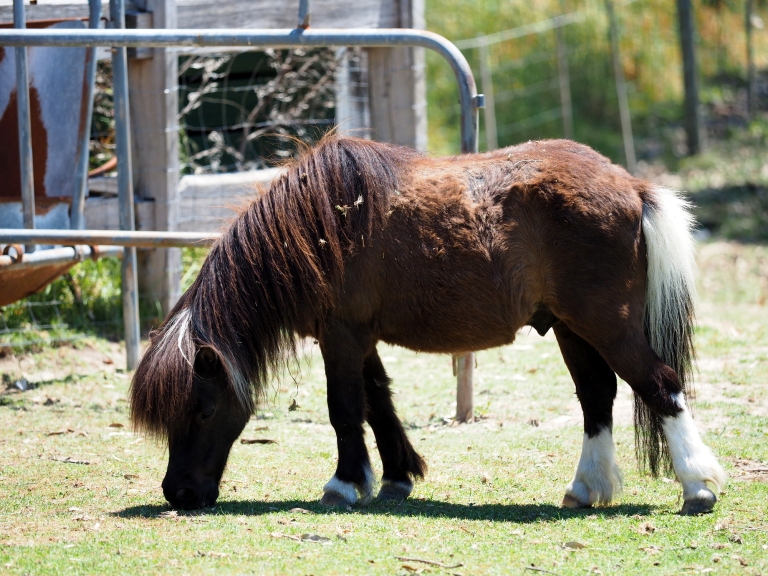 hey, did you know a male donkey is called a jack and a female donkey is called a jenny or jennet? now you know what not to name your next kid, although i like all those names. very classic and definitely something that the barista at starbucks can spell. i wouldn’t even dare use my own real name in there. i mean, people i speak face-to-face with in a conversation that doesn’t involve them making my coffee in a loud and busy cafe ask me for my name and i tell them and i still end up being called ‘julie’ so there you go. 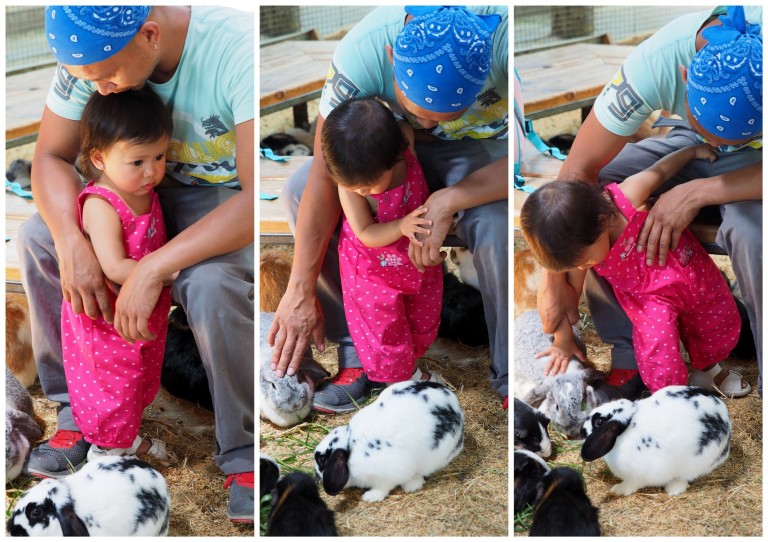 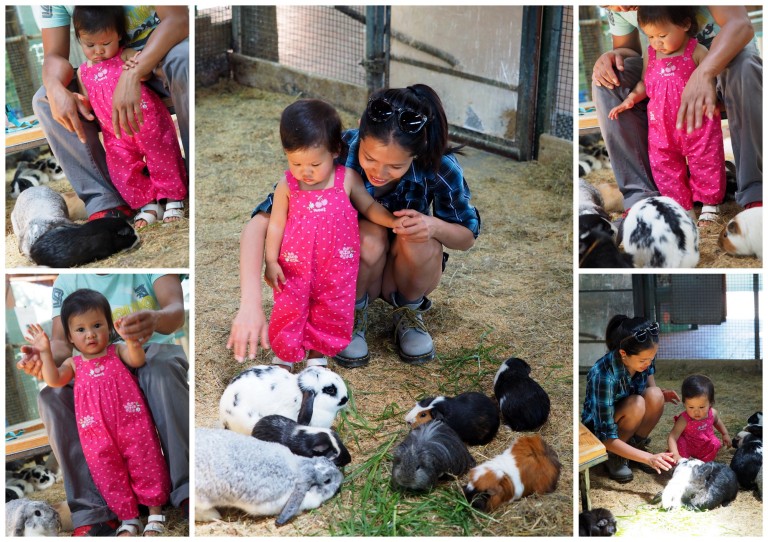 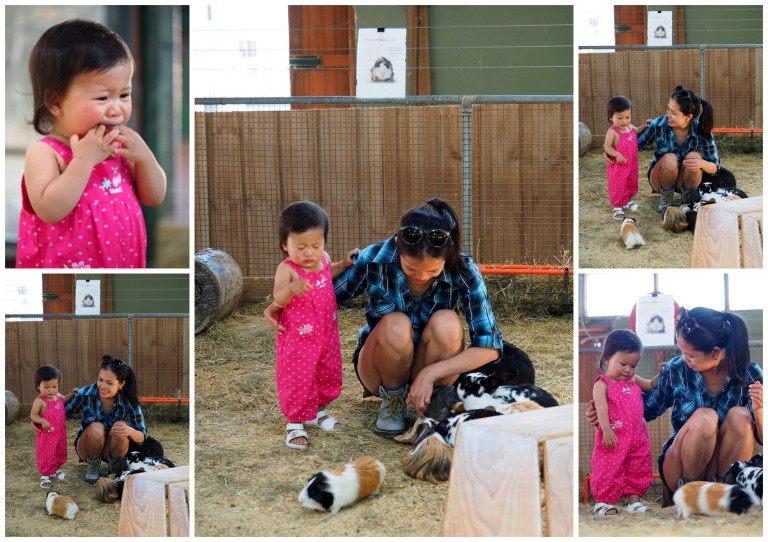 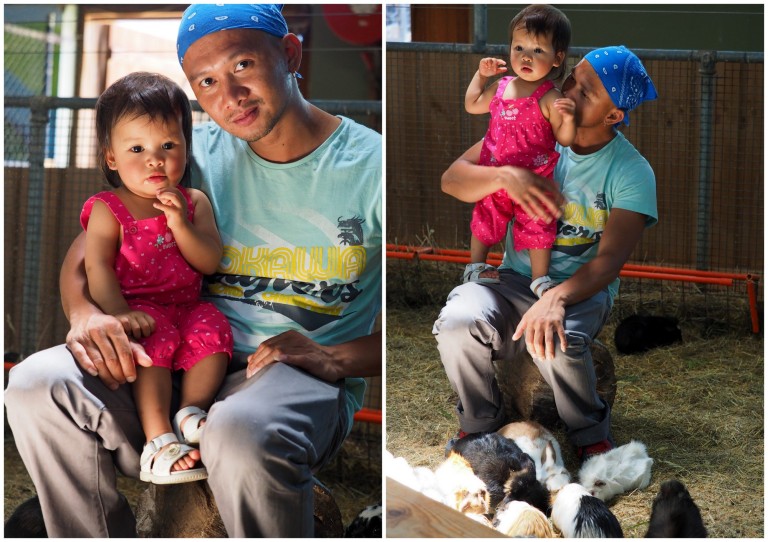 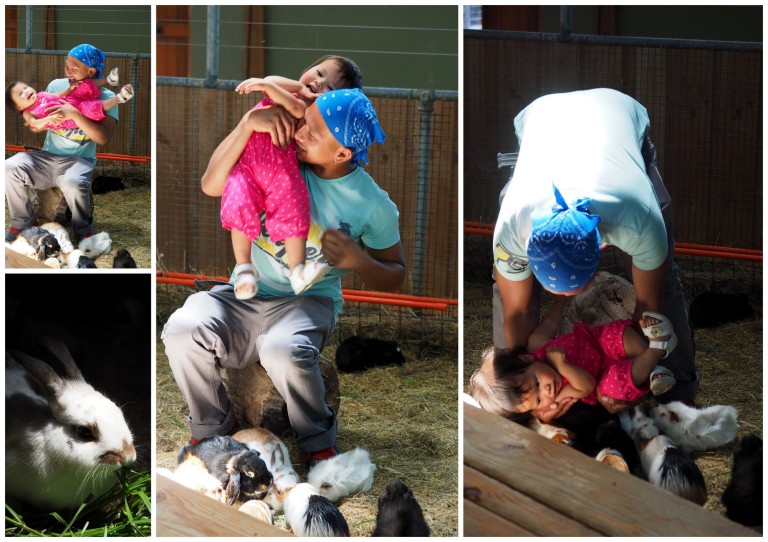 did i already say the bunnies were adorable? they were. raven hated them. didn’t wanna get near them or touch them. it took a whole lot of coaxing and demonstrating on our part to show to her that those harmless furry creatures were exactly that — furry. we must’ve spent 15 minutes in that cage just to get some sort of positive interaction between her and the friggin’ rabbits and guinea pigs to justify our money’s worth and in the end, she warmed up to them, albeit slightly. it was short-lived but, whatever. we’ll try again next time. 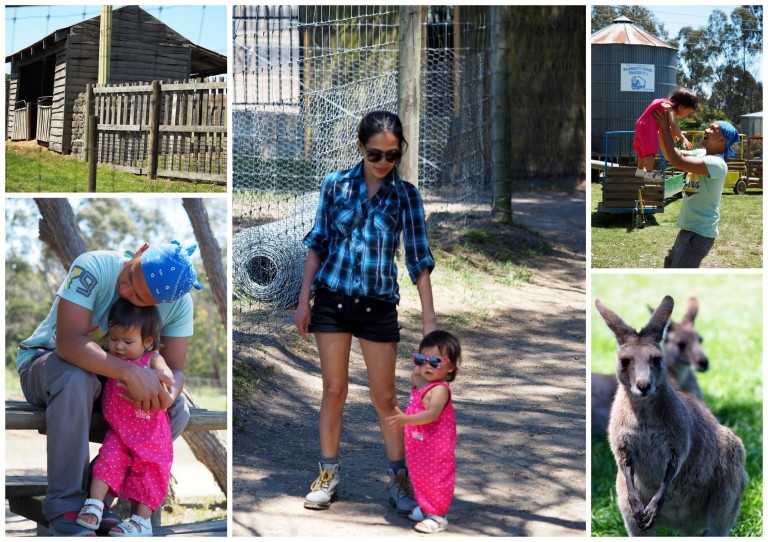 if you’re new to the country and have never seen a kangaroo on a roadkill and would rather not as they don’t exactly make like-worthy pictures on instagram, myuna farm is definitely one place you can go if you’re within the area. i reckon a lot of visitors are there for australia’s most popular icon, next to the dingo which they don’t have. 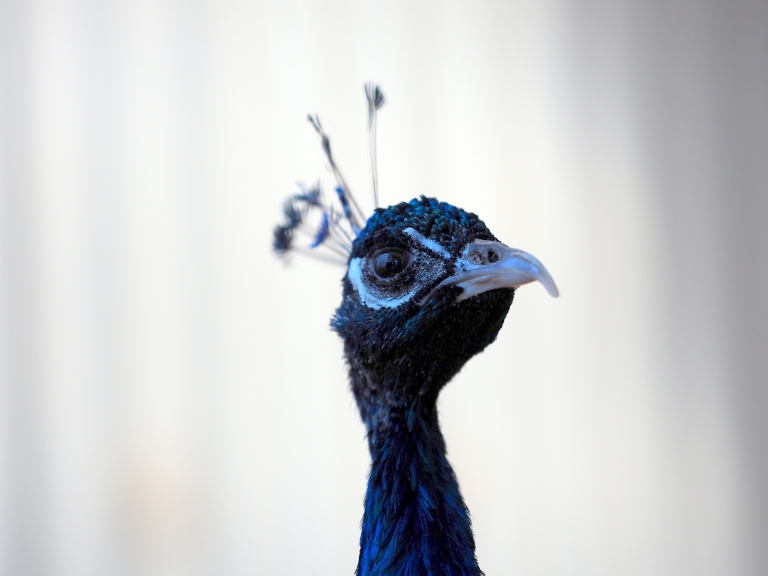 they have emus, though, if that’s any consolation. but that’s not an emu. that’s a peacock. 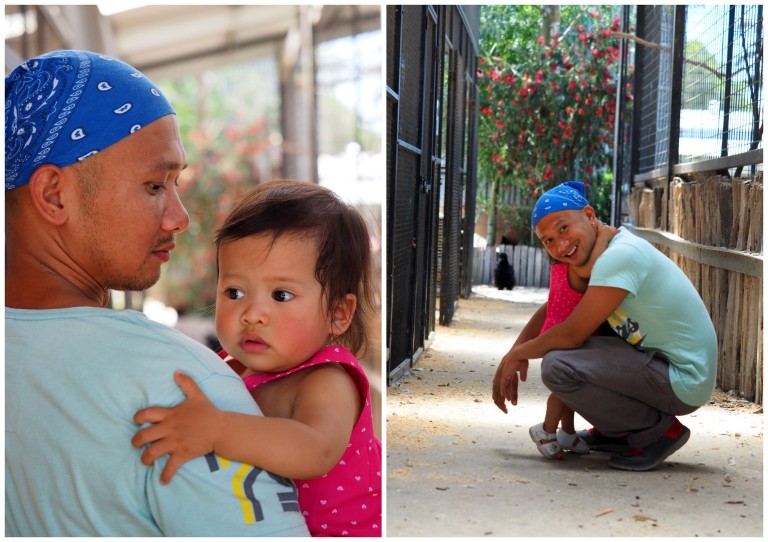 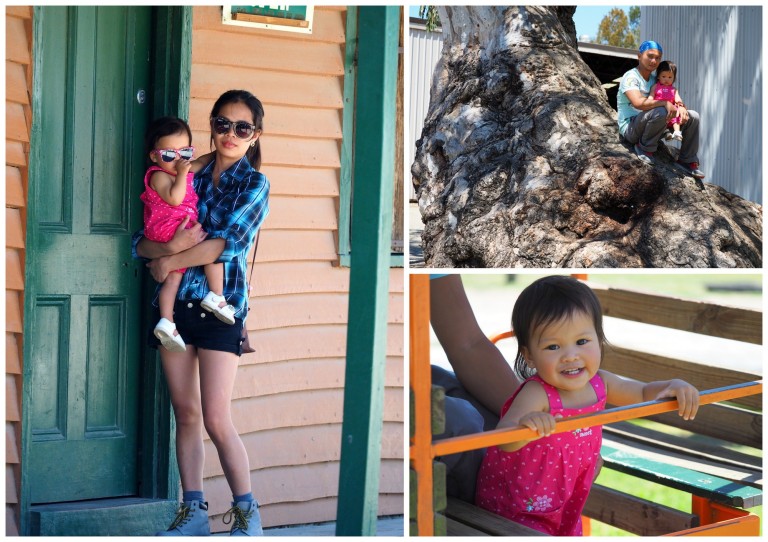 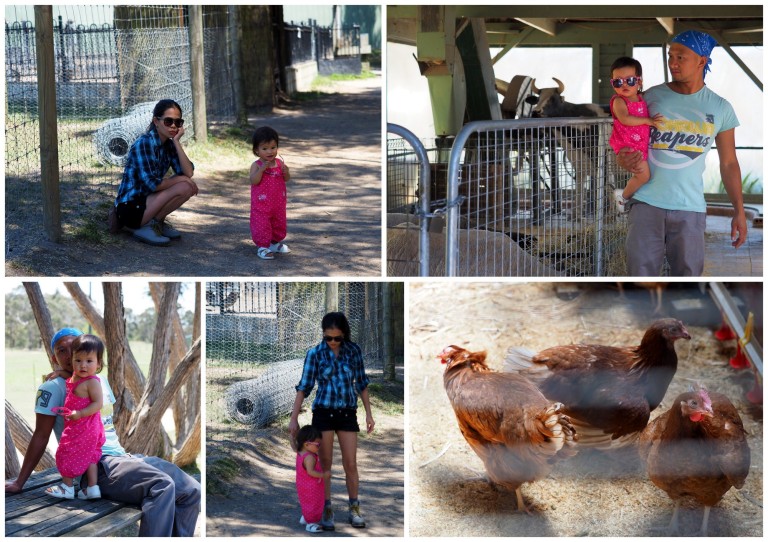