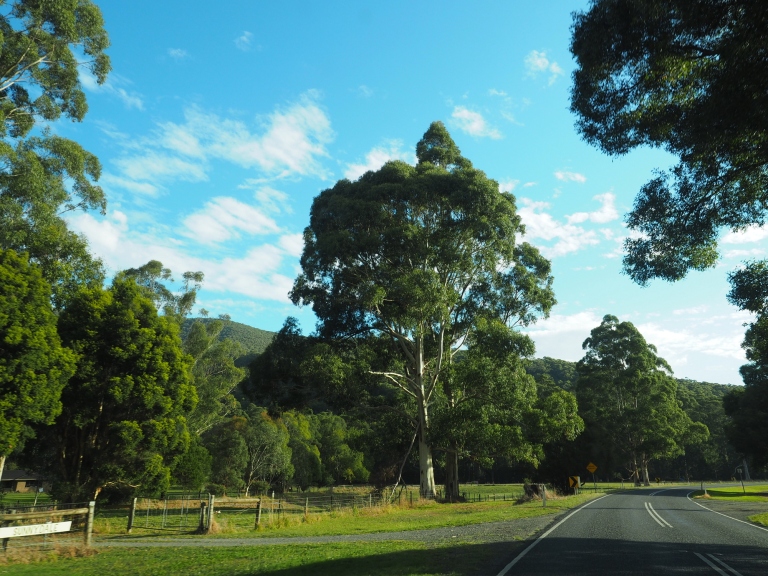 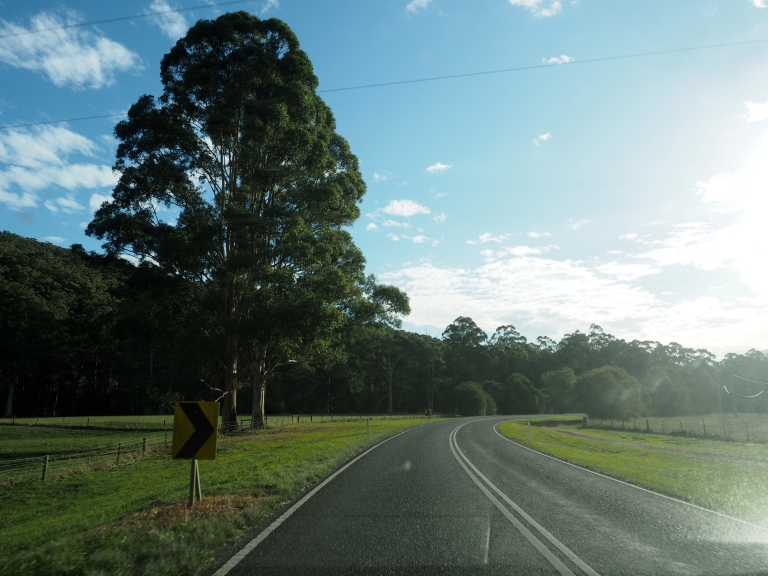 the song is still playing on my mind. just as last sunday’s memories still play in my head.

sitting in the front seat while my sister drove, long stretches of fields filled my view. horses grazing on the grass while mountains and trees loomed behind them. behind us, jeff was on his phone while raven played with the carved wooden animals el2 bought for her at this random shop we visited on a whim.

“who sang this song?” i asked.

“dunno,” she said. “kath alexander something.”

“hmm…” my attention goes back to the world outside. the setting sun casting a soft yellow glow on everything it touches.

“it’s actually a song for her sister who died,” she continued. “it’s cool how spotify has all these little background stories about the songs. i read it from there.”

i loved the song the first time i heard it but learning about how it was written for her sister who died of cancer makes me love it even more. so now, here i am at 1 in the morning with the song still stuck in my head and feeling grateful to have a sister of my own who doesn’t mind tagging me along for a weekend joyride. of course, i come with a baby and a husband too so she takes them along as well. 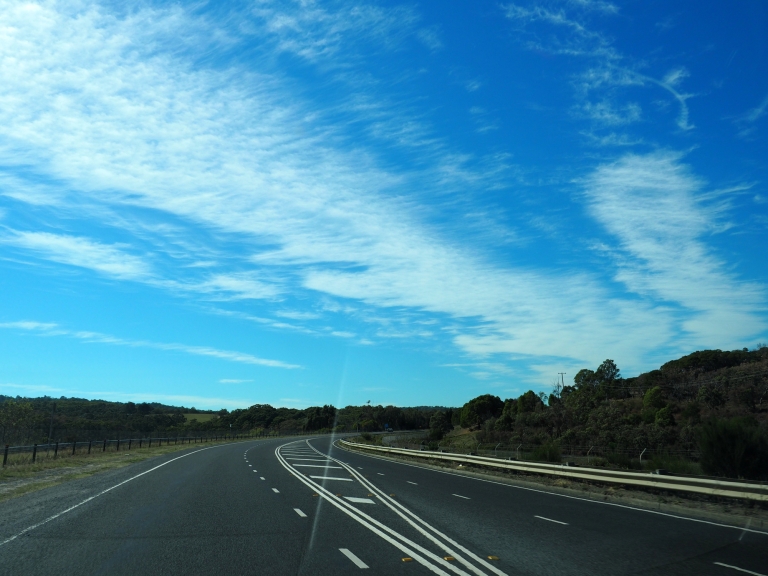 the day was beautiful and as usual, victoria was beautiful. a delicious 29 degrees. by the time we reached emerald, it seemed as if all the grandpas were out based on the number of vintage cars i saw on the road. everyone was wearing summer vibes and outfits. as i didn’t bother to check the weather forecast and melbourne being famous for its crazy weather, i wore something warm (and by that, i mean jeans when shorts would have fit the bill perfectly). i even brought a coat in anticipation of a snow blizzard. you never know. and i’ve been wrong in my sartorial choices so many times before — either being underdressed or overdressed for the weather — that now i’m smarter about it.

or so i thought.

it was a leisurely drive. mainly because i wasn’t the one driving. so i had all the time and the leg room in the world to take pictures, and take pictures i did! not even 15 minutes in and already i was consuming too much battery. but then again, didn’t i say it was such a gorgeous day to be out and about? 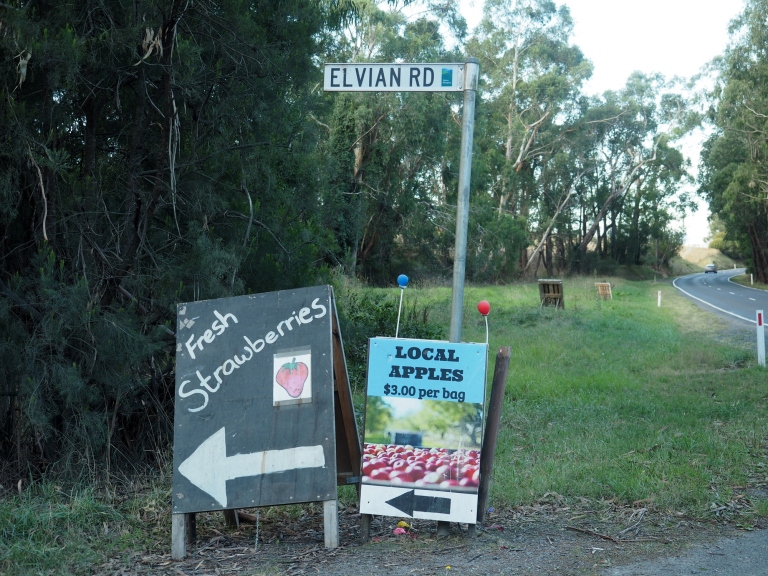 along the way, we made a little pit stop to buy a bag of apples (they were out of strawberries) at this self-serve shop by the road which was more like a shed than anything else. no one was there. the business runs on people’s honesty and cash we didn’t have on us so we had to search for any loose change in our wallets, in our bags, in the car.

jeff proclaimed it was the freshest, juiciest, crispiest apples he had ever eaten in his life.

i agree. and i don’t even really like apples.

lunch was on me and we had it at warburton, now one of my favorite towns where i would love to live in. nevermind that it’s about 70 km away from where we live right now. which is another 40 km away from the city. 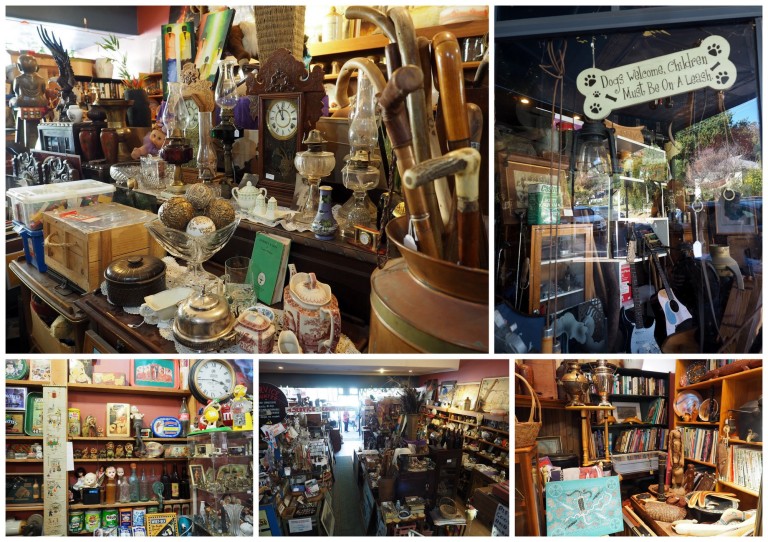 but seriously, everything about it was my kind of town — the eccentric secondhand shops and bookshops and cafes sitting next to each other on either side of the main road. in their backyard is a long winding river with its picnic areas that families flock to on days like this.

i bought indoor plants. my current obsession which started with a huge pot of peace lilies that now sits in one corner of our home. they’re supposed to be hardy plants. very forgiving. doesn’t need a lot of watering, thank god. i’m hoping for both our sake that it would continue to live.

in short, i choose my plants with care. not so much how pretty they look, but how tough they are under certain conditions. particularly when they have a caretaker who doesn’t exactly know what she’s doing but is on a mission nonetheless to embark on a green thumb journey with google as her guide.

for the record, i bought 2 pots of polka dot plants, 1 pot of devil’s ivy, and another pot of ferns. the day before that i bought a monstera plant at bunning’s. so pretty much in a span of a week, i adopted 6 kids. now i understand people’s obsession with gardening. at this point, i’m just really hoping they won’t die on me because like real kids, they sure as hell don’t come cheap!

our main destination was actually redwood forest. a place i never heard before up until my sister mentioned that she wanted to take raven there. she loves taking raven outdoors, an opportunity i always welcome because i get to go too and she’s driving. #hiddenmotives

don’t let the dusty road dampen your anticipation. if anything, with the right light and at the right moment, they make driving into the bend seem magical. 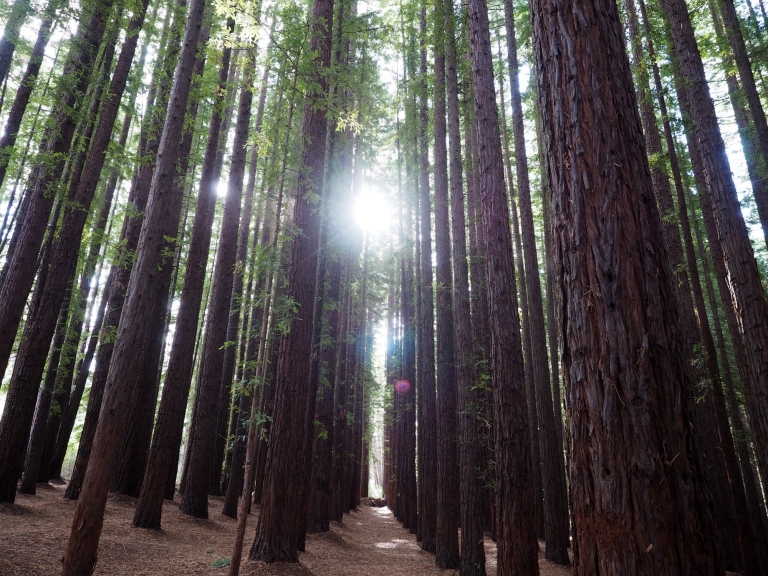 standing in between rows and rows of redwood trees, i was transfixed. it felt like i was home. you know what i mean? i never expected to feel that way with a forest because this whole time i thought i was a beach kind of gal but guess what, for some reason i felt like i was in my element.

i must have been a monkey in my previous life. 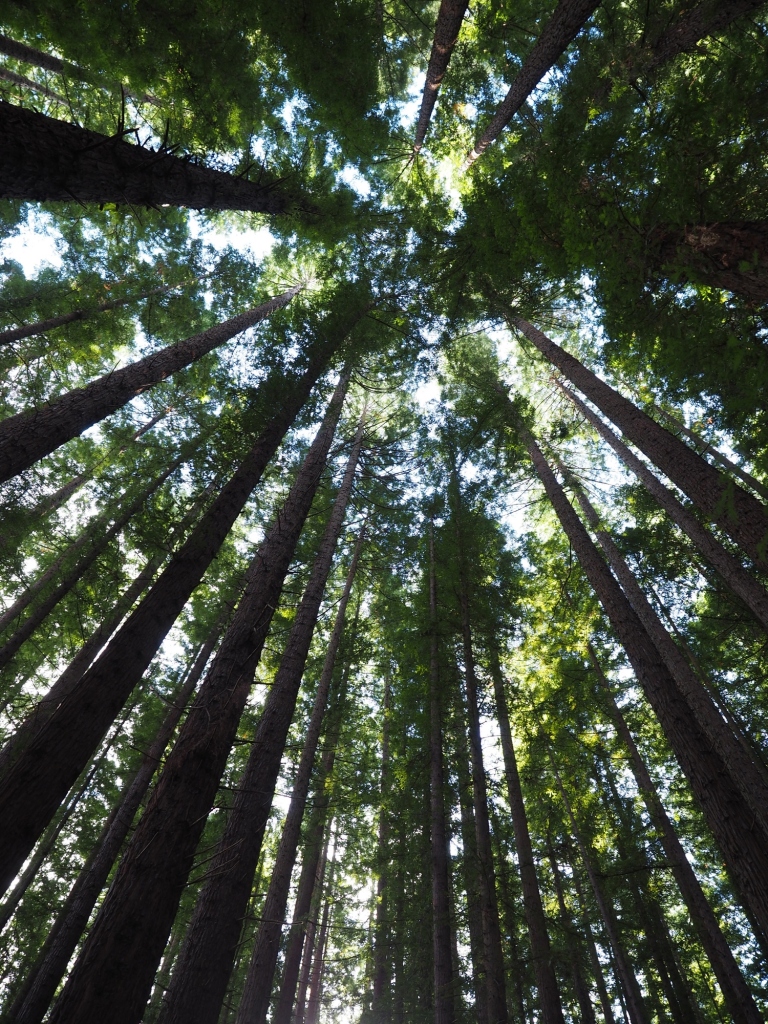 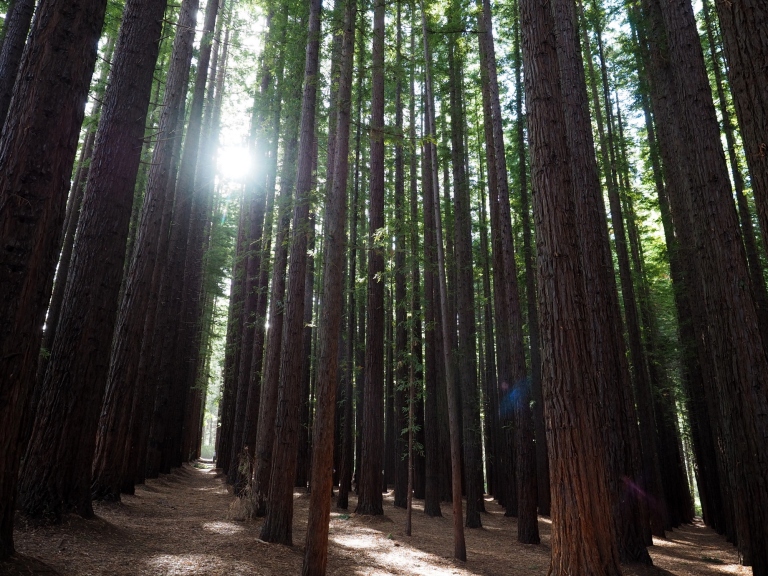 but seriously, i wouldn’t mind just sitting next to one of the trees or lying in the spaces between them for hours. doing nothing. just simply being there — to listen to the rustle of the leaves high above me. watch the branches dance to the rhythm of the wind in a gentle swaying motion. meditate on the beams of sunlight filtering through the thickness of the forest.

so it’s true, then. trees really do absorb sound. so much so that i felt like i was deaf, but in a good way. because they muffled the sound of my thoughts, leaving me at peace. that’s also when i knew i overthink too much that it has become a burden to me lately.

maybe that was also why i wanted to stay there longer. 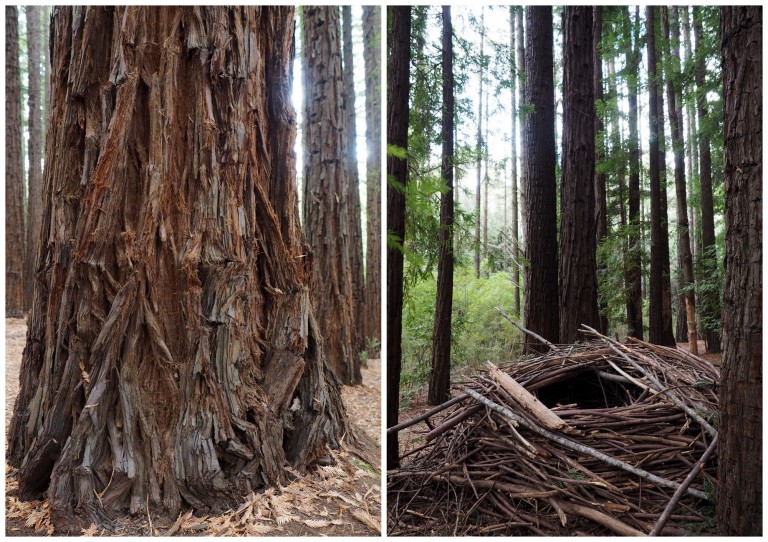 at random areas of the forest are branches and twigs piled on top of each other to form a circle.

“these are birds’ nests,” jeff informed me, matter-of-factly.

considering how many times i fell for his outrageous “trivias” in the past, i’m familiar with the game now. he thought i was going to bite.

“yeah, right.” i said, rolling my eyes. “next thing i know you’d be telling me they’re built by dinosaurs.”

“no, seriously!” he persisted. “they’re made by big birds — like ostriches and emus.”

i walked away, half ruminating over the possibility of what he just said. half in disbelief because i couldn’t imagine ostriches running around the place. logic told me it couldn’t be, as the nests were just too neatly arranged. those birds must have OCD to create something so tidy.

so, for the record, no, i didn’t really believe that. so if you’re one of the people who was there whom he told that i totally fell for it, that’s not true. i just didn’t say anything because, whatever. 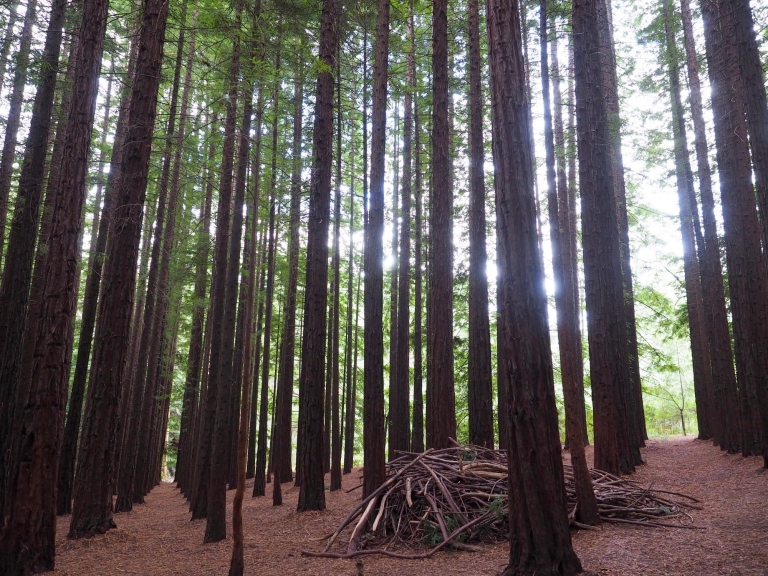 in reality, these nests are actually artwork displays. the council hires artists to create them. i reckon it’s pretty cool how these creative installations use materials that seamlessly blend in with nature itself. it’s a genius idea. so simple, and yet so profound. 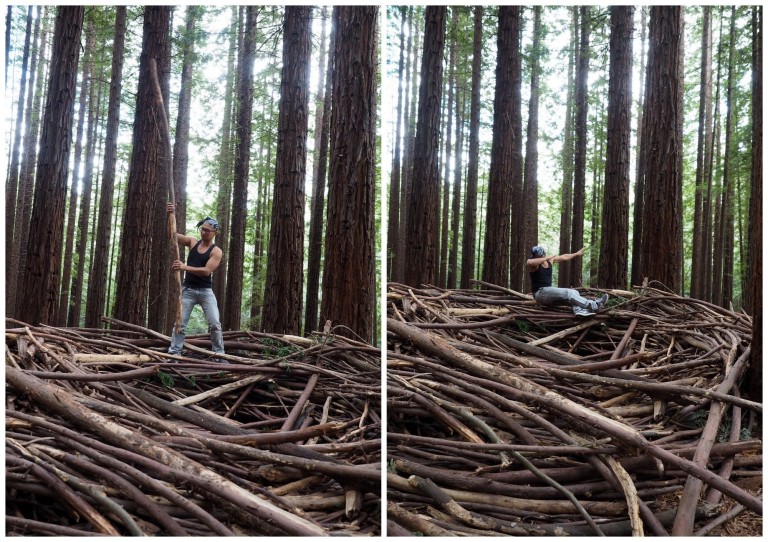 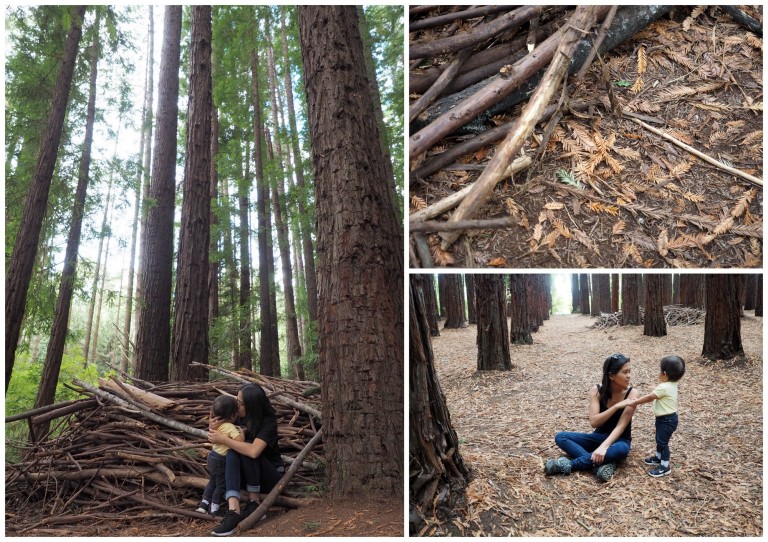 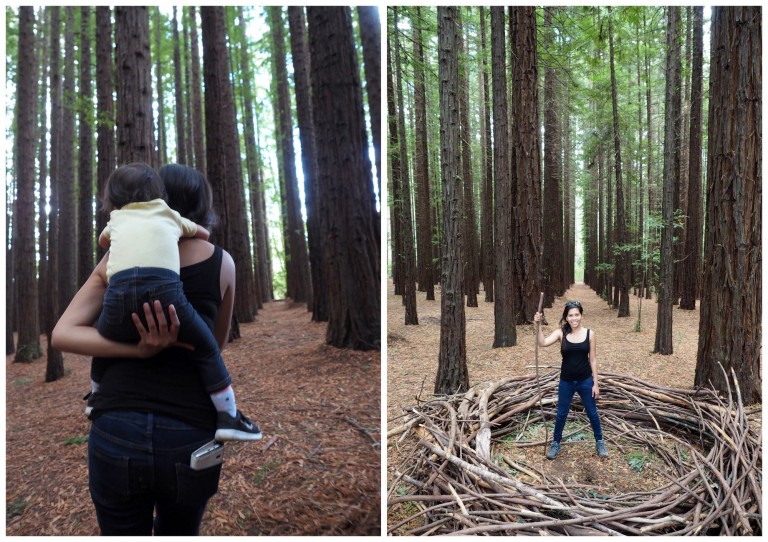 i swear, it’s a really beautiful place. i mean, for me, that is. and it’s free. the only expense you incur would be for petrol and food if you wanna dine out. but then again, you can always bring your own and have a bit of a picnic on the clearing outside of the forest. whatever rocks your boat.

the video is obviously a noob. it’s the best that i could do to try and capture the beauty of the trees swaying in the wind. doesn’t even do it justice, to be honest. but jeff and raven making music with sticks is definitely a keeper. they’re the bush stick band, they said.

stopped by at this intriguing shop on the side of the road on our way home, lured by the call of the heart chains and the colorful paint of this decking chair i would so buy if i had the money and the space at home to put it. instead, i got myself this wooden elf decor which caught my fancy. i liked that looking at it made it happy. maybe it’s the smile painted on its face. either that, or the sticker stuck on its body indicating that it’s on sale.

el2 got raven these wooden animals. she said it’s a good educational toy for kids to learn communication by play-pretending that the animals are holding conversations with each other. something that occupied raven in her carseat on the drive home before she finally fell asleep. she doesn’t really talk in full sentences yet but she had her wooden cat and dog hugging each other. something she likes to do with all her toys, really. she’s a very affectionate kid.

i love her to bits.

6 thoughts on “into the woods”