all those excuses i made for myself, deep down i think i was just scared. my arguments may have been valid on some level and i confess some of them still kind of holds true until now but…

i finally took the leap of faith and challenged myself to learn something new. it was either that, or dancing. the latter i still need to sort my schedule out and look for dance classes nearby that cater to shy beginners like me, inspired after watching this video of a woman who learned how to dance in 30 days.

just as i also wanna learn to paint using gouache, my medium of choice. a cross between watercolor and oil. for my birthday last year, girlie gave me a set of gouache paints but i have yet to make use of them so at the moment, they’re just there waiting for me to make little masterpieces out of them in a sketchbook i specifically bought for that purpose. to be brutally honest, i can’t really paint. maybe i might just have to jackson pollock it when i find the time.

but this week, what i actually took the plunge on was rollerskating. remember when jeff bought me moxis? that was over a year ago. i’ve only used it like, i don’t know, twice?

‘i can’t afford to break any bone because who’s gonna look after raven?’

like i said, valid points. but with a slight tinge of cowardice, nonetheless.

until i realized, ‘f%ck it. i wanna learn something new this year. and i wanna see how far i’ll go. let’s go get me some protective gear because if i’m gonna be a reckless adult on a midlife crisis, at least i’m a responsible reckless one. let’s yolo this sh*t!‘

and that, my friends, was how i ended up at bayside blades. because i didn’t want just a generic kmart knee pad for my newfound sporadic recreational activity. i want the best of the best.

so i got me the starter pack. because f%ck me, ‘the best of the best’ cost an arm and a leg — appendages i am buying those elbow pads and knee pads for.

and to add insult to injury, it’s a junior one. meaning, i can borrow a 12-year old’s protective gear and they would fit me just fine.

i had to subtly grab the stuff off him and just hurriedly put them on myself. he wanted to take the time. wanted me to have a feel of them and test them out. think it over. but for the life of me, i just could not concentrate. i was like, ‘yep, the junior size feels more snug. it’s fine. i’ll grab it.’ you know, just to get things done and over with.

me and my toenails have issues. 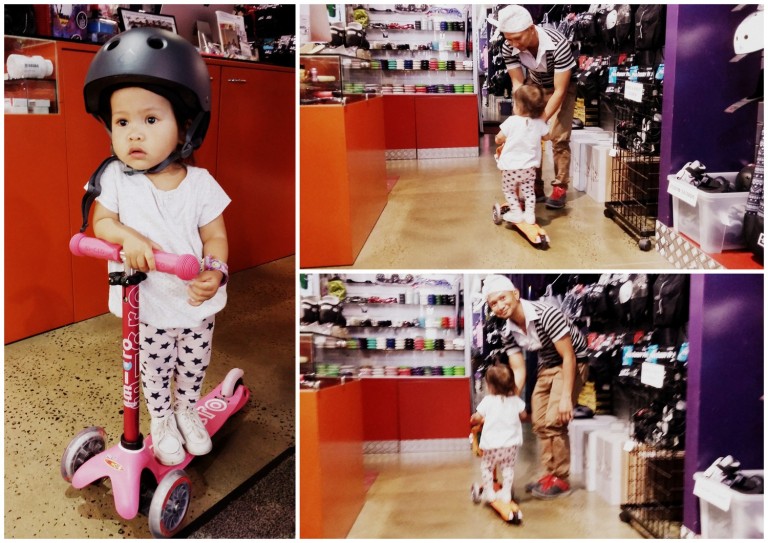 meanwhile, while all this was going on, raven was tripping on a micro mini scooter. big time. the moment we tell her to say bye-bye to it and lead her to the display area so we can put it back, she’d cry. wouldn’t let go. but i kept teasing her, anyway.

and at the risk of sounding like we’re whipped parents, we bought one for her. on the spot. with a proper helmet, to boot. it sure as hell wasn’t in the plan but to justify the impromptu purchase, she’s our baby and we love her.

also, we didn’t get her anything for christmas. and for the money we blew on her that day, i can guarantee she won’t be getting anything for her birthday either.

but for what it’s worth, it’s an awesome scooter, quality-wise. it’s perfect for her. plus, she looks so cute in it!!! i would’ve wanted to get her a pink helmet instead but pink everything was such an overkill. and besides, that black one fit her head the best. safety first before anything.

here she is taking her scooter out for a ride outside melbourne museum later that day. it was such a proud moment for me and jeff to watch her tiny leg pushing off the ground.

until she saw the pigeons and started chasing after them. abandoning her scooter without a moment’s hesitation.

as for me, i have done 2 days of rollerskating, so far. at this netball court close by. skills-wise, i’m still a loooong way off but damn do i look the part! i mean, if you saw me you’d probably think i was a f%cking pro or something.

until you see me wobbling — and stacking — in them. which would then lead you to the conclusion that your 6-year old niece can do so much better.

but on the bright side, i’m not as scared of falling anymore! well, i still am, but not as much as before. i guess falling is all part of the process. you just gotta learn how to do it properly. there’s almost an art to it.

it was fun sharing with jeff my “progress report” at the end of every session. sure, he saw me do it. he was there the whole time. but he was more focused on looking after raven while i was focusing on lifting my left leg off the ground so i had to give him sort of like a blow-by-blow account of the the things that i learned and the things i needed to work on. at my own pace. something i always insist because i’m not a daredevil like him.

i just want everything nice and chill.

as far as these protective gears go, i’m finding them a bit uncomfortable, to be honest. the straps cut into my skin, especially when i fold my arms or bend my knees. i keep adjusting and readjusting them at some point.

oh, well. they’ll have to do. for now. as if i go around skating at breakneck speed. your grandma can probably walk faster than me on my skates.

and she has arthritis.