as passionately as he says he hates writing, he’s actually a very good writer, jeff. if you break his statement down, what he actually means is he doesn’t like the act of putting pen into paper and scribbling his thoughts away. says his handwriting is really bad. i couldn’t agree more. reading his penmanship is like cracking an ancient egyptian code.

but once upon a time, he did keep a journal. i know because it was lying around the house and i read it. and it shocked me. he’s a really good writer. very poetic. tries to rhyme his words and liquify the flow of his lines. sometimes you’re swimming in a shallow river, other times you’re drowning in it. a lot of times i thought, “damn, i wish i wrote this shit!”

today he shared with me something he wrote on this drawing journal i bought for him in the hopes that he would resurrect his talent for doodling. about how the first of january is everyone’s birthday. and i liked the idea of that: a universal birthday celebration regardless of one’s age. everyone going through the birth process of resolutions and starting on a clean slate.

we celebrated new year’s eve with dinner at jeff’s mom’s house. i had a little too much of nanay’s pancit (omg, i love pancit!) and pork afritada, if it was indeed pork afritada. whatever, it was so good with rice. while the rest of my family in cebu were probably busy munching on crispy lechon. (times like this make me miss lechon more than ever.)

oh, and jeff used his newly-bought flash so he was busy snapping pictures left and right. and for some reason, he always seems to catch my most awkward facial expressions. i think he kind of gets a kick out of it because after he sees them on his camera screen, he’d laugh and say “boo, your face is so funny! it’s priceless!”

yep, we are each other’s entertainment. 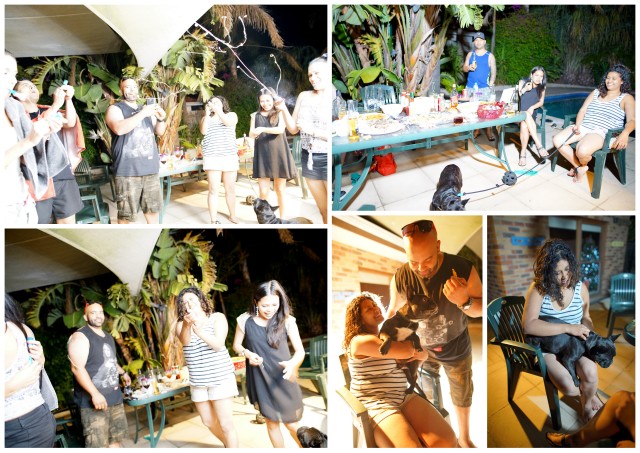 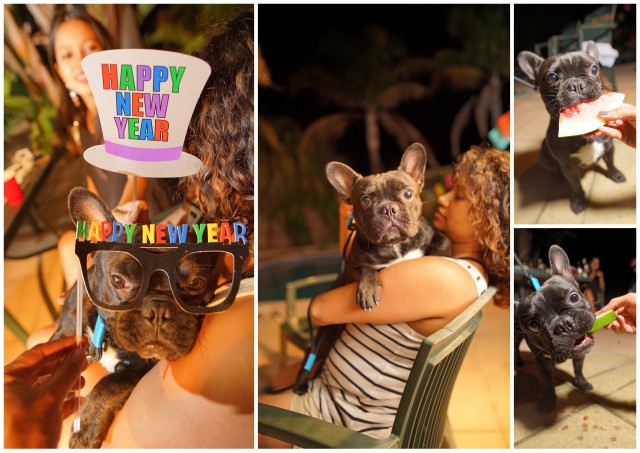 after dinner, we drove to over to his friends’ party. lyle and nichole has the cutest french bulldog! his name is hank and he kinda looks like lyle. lol. but seriously, i have never seen a dog eat fruits before. hank does. he eats raspberries and watermelon. and he’s very well-behaved. a really sweet dog. he makes jeff wanna get one. but jeff said he wants to get a pug. because he reckons it’s cute if we get a dog that would have big eyes like mine. if that’s the case, we might as well get a chihuahua too so our other dog would look like him and then we’d both be walking dogs that resemble each other.

here’s our first picture of the year. and how does a photographer take a selfie with his wife?

first, he sets up the aforementioned flash and then he angles his beloved sony camera using his wife as a reference point. when the angle’s still off, he improvises a stand to make the camera tilt upwards. when he’s happy with that, he opens this app which allows him to control his camera using his phone. of course, there can be some glitches with the settings so it takes several tries and a lot of tweaking here and there trying to figure out what’s going on. at this point, they’re both preoccupied figuring out what the problem is that it’s not so much about the selfie anymore as it is about playing detective with his gadgets.

they’d be lucky to get a decent shot or two. because seriously? the struggle is real.