when i don’t call him a nerd, i tell him he’s such a geek. because he is. he loves anything that comes with wires and batteries. electronic stuff whose manuals he doesn’t even bother to read because, hey, he pretty much knows where this and that goes and if he doesn’t, he figures it out. in less time that it takes for you if you were to actually read the manual itself. i personally think he’s a genius. (just don’t corner him for a heart-to-heart talk, though, ‘coz that’s pretty much his kryptonite.)

as smart as he can be when it comes to gadgets, there are moments when things don’t work out for him. those are the times i leave him to his own devices as he throws the defective item like a kid with a tantrum and shouts in frustration, “this was gonna revolutionize everything!”

being in such close proximity with him leaves me but little space to run away when he’s trying to convert me to his, um, religion. baptizing me not with water, but with detailed instructions bordering on obsession on how to operate his cameras. (yes, plural form.) of course, aside from the practical side of it, he also shows me the art of photography — the sleekness of vintage lenses, the clicking sound of the lens attaching to the camera whose precision engineering is music to his ears, and most of all (because it’s my favorite of all) the beauty of lens flare.

i’m not fully converted yet because his religion does take a certain form of dedication and practice but i guess you can say i’m halfway there. well, kind of. because while i like taking pictures too, i’m too lazy to be bothered with the manual settings. i like my photos bright and auto. no dramas. 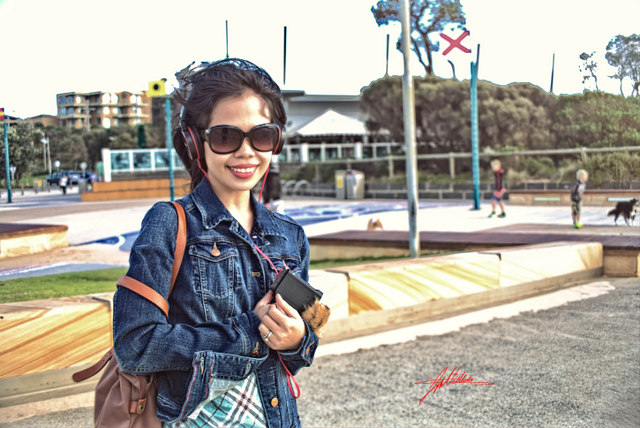 so this is me at frankston beach a couple of weeks ago armed with his video recorder (which is really good with audio, he says) complete with a headset so i can hear the sounds better. and by “sound,” i mean that amplified noise made by the heavy wind singing bad a cappella with the waves.

i didn’t do a good job taking videos on this day. mainly because the wind was too strong that the sand particles were like bullets fired into my skin by a machine gun. it was fcking painful! i’ve never experienced anything like that before. i can only imagine how sand storms are a million times worse.

if memory serves me right, this was our first road trip during his holidays. there were several more after this but this was the first. just going whichever exit on the roundabout he felt like going and me riding shotgun in all of it. #theperksofhavingapersonaldriver

there’s this indian restaurant there at dromana that serves really good indian food. (i mean, duh!) i give their mango lassi 5 stars because it was better than the mango lassi in the city. jeff reckons i should start blogging about the food and the restaurants we go to but it’s kind of hard to do that when most of the photos we have end up looking like it’s been ravaged by two starving little filos. (see lower right photo above.)

we also drove to olivers hill in frankston south (if my phone’s gps tracking serves me right). i liked the houses there. million-dollar houses overlooking the sea. jeff liked this one sitting on top of the cliff. you should’ve heard him talk about his plans on how he’s gonna do up the property and all the parties he’s gonna have once he buys that house. which he will. as soon as he wins tatts lotto.

for now, he just has to be content with winning the best jackpot there is. ME. hahaha. =p

4 thoughts on “dromana beach and everything in between”