i admit. i stalk a handful of local bloggers just to see what’s new around town, as i hardly ever go out. it’s amazing how i’m learning about all these hole-in-the-wall restaurants sprouting like crazy in obscure areas all around the metro that i’m like, “where have i been all this time?!”

but seriously, i find it fascinating how residential homes in residential villages are now being converted into restaurants or even just as chill-out spots. their front yards or garages turned into dining areas with tables and chairs and that’s pretty much it. roma, jelven, and i once tried this restaurant in lahug whose reviews claimed that it has the tastiest baby back ribs. let’s just say it was a total disappointment. so, no, i won’t bother talking about that (although, in essence, i already am. but, i just can’t.).

granted, everyone has different tastes in everything — be it in food, music, fashion, whatever. especially in food. one blogger’s gastronomic bliss may be another blogger’s “wtf?!” so everything that i’m gonna say from this point on is strictly my own personal opinion. there, i just unwittingly wrote a freaking disclaimer.

okay, so it’s no secret that i kind of love chicken, having confessed to it several posts back. i’ve stopped counting the number of times i told jeff i’m gonna go vegetarian because the moment i do, i think about the springvale chicken temptation and to be downright honest, i cannot not cave in. because their chicken is so deliriously good it’d make you question who and where you are. i know, i know. it sounds so exaggerated but i hardly ever get passionate over food (although i eat A LOT. my family and friends can attest to this.) so the moment i do, that’s my gut having a heart-to-heart with you. either that, or the food was probably laced with drugs. lol.

anyhow, i like spicy food too. so the words “spicy” and “chicken” together in one sentence is enough to make me wanna get out of my cave. after i read this blog praising gibb’s hot wings for being really yummy, i immediately texted jelven telling him we had to go and try it. (he’s into hot stuff too which, in his world, could probably translate to “roma.”) he was game enough to agree. 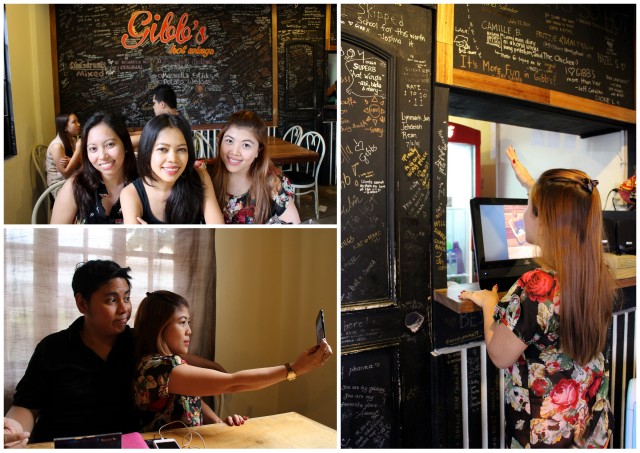 and so there we were. in a tiny (and i mean tiny!) restaurant at holy family village in banilad called gibb’s hot wings that, from the looks of it, could seat only about 20 people max at any given time. (check out their facebook page. i just did. and found pictures of us there. lol.)

but the very first thing that greeted me the moment i entered the unassuming black door?

the aroma. an omigod-i-bet-my-kidneys-i’m-gonna-love-their-food-here-because-i’m-loving-the-smell-wafting-off-from-the-kitchen-already kind of moment. you know what i mean?

they don’t have the traditional menu. you actually have to walk 3 steps up to their counter to order.

i missed that bit. jeff called to tell me he was getting a TENS machine for his back pain and they were having a buy 1 take 1 promo or something so he might just have to get two. maybe give the other one to his mom. convincing me of its benefits and enumerating the number of other ways he could use it for like he’s educating me about the specs of his fantasy computer. he also casually mentioned how it comes with a vaginal probe too but that it’s completely optional.

that cracked me up. the thought of his mom’s wtf reaction upon receipt of such thoughtful, albeit confusing, gift. lol.

when i went back in after talking to jeff and laughing over his massage story that was more like a punishment than relaxation, the food hasn’t been served yet. so we took the time checking out the writings on the wall and admiring the genius and very eco-friendly idea of using magazine pages as placemats. 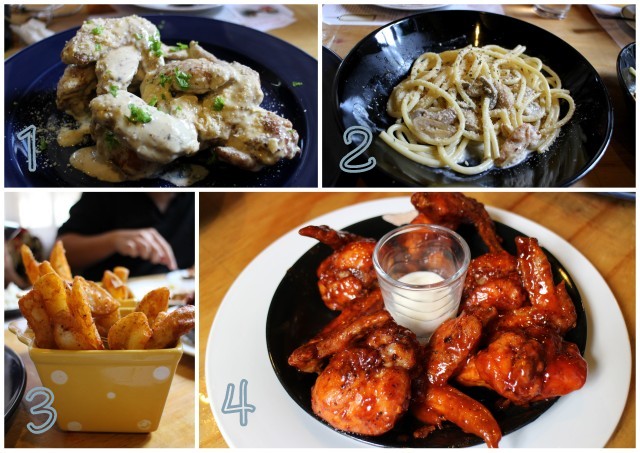 now, about the food. i’m sorry if i’m going to sound really vague but allow me to be vague anyway:

THE FOOD WAS FREAKIN’ AWESOME!

if the all caps isn’t self-explanatory enough for you, these bullets might be easier to digest:

1. the original chicken (i forgot what it’s called) wasn’t spicy at all. i guess this is an alternative for those who are considered supertasters such as roma. to be honest, this was so-so for me. but in a good way.

2. the jumbo spaghetti noodles was okay too. typical carbonara.

3. now, this one i loved — the potato wedges. i liked how crisp it was and how it had this flavorful taste to it. it was so good!

4. this is where the “freakin’ awesome” comes in. the super spicy chicken wings that was just the perfect spicy for me. but i have a high tolerance for spicy food so it might be a little too much for some people. all i’m saying is, it’s definitely a must-try!

about those graffiti, you might wanna bring your own metallic marker if you wanna scribble something on their wall. when we were there, the owner had to heat up the tip of their marker for it to work and for all his effort, i was dumb enough to scribble just my own name. partly out of vanity, and partly because i didn’t know what to write. so, yeah, that’s my handwriting right there next to the chubbies (roma and jelven’s pet name for each other). 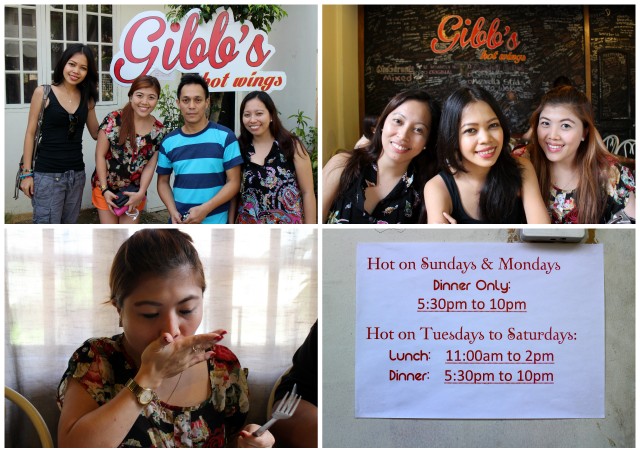 the chef’s husband, frank, was really good at entertaining his guests. he came to our table and asked us if we enjoyed the food, blah blah blah. it was a very nice gesture — taking the time and effort to get to know your customers and all that PR stuff that helps so much in giving customers a good impression of your business and sends everyone home in a happy mood.

and, oh, for the record, the restaurant was named after their dog. he said he was thinking of hanging a picture of it on their wall as everyone who came there had been asking who gibbs is.

maybe i’ll finally see the face of the already-famous gibbs on a framed photo on the wall the next time the restaurant finds me there. =)

5 thoughts on “gibb’s hot wings. you wouldn’t wanna chicken out on this.”