when i graduated and received my master’s degree three years ago, these girls were by my side — after arriving an hour late but managed to make it on time to see me walk that stage. twice. (best in math and best in science medals, baby! lol.)

i remember sitting there after the celebratory mass, sweating inside the silk black and orange toga, the mushroom cap (as gayle called it) weighing a ton on my head, constantly looking back into the audience to check if my favorite girls have already arrived. their text messages were not exactly very reassuring, with girly claiming to be in the taxi on her way to the coliseum and gayle announcing that she was already at the gate but couldn’t get past the corsage vendors “harassing” her. i couldn’t help but stifle what would have been a boisterous laugh. at the same time, i couldn’t wait to see them.

my family was there too, of course. i couldn’t be any happier. but the presence of my friends somehow completed that happiness, like everyone i loved was there and i felt so blessed. 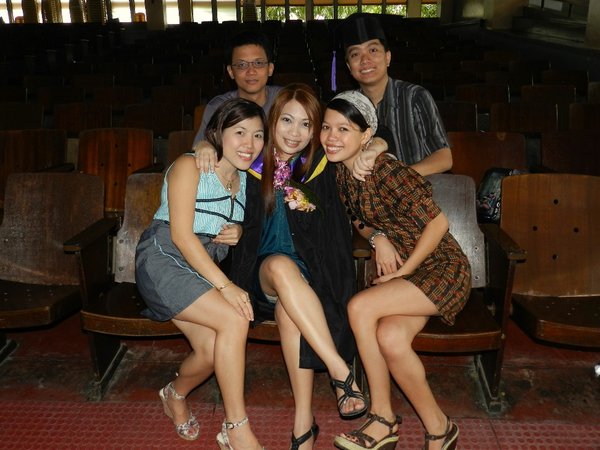 which is why i try to make it a point to be there on their special day too, although regrettably, i was way too late for gayle’s law graduation. there weren’t a lot of graduates to stall the time so we just took pictures with the very pretty celebrant who proudly showed off her straightened hair and made-up face which, according to her, she spent more time on than all her years of studying combined. how she graduated is beyond me. lol. but i wasn’t surprised at all. she’s the kind of smart who doesn’t need to read when she can cram! haha. no, seriously, that woman is so smart, she’ll have you scratching your head with the intelligent words coming out of her mouth. (don’t even get her started!) 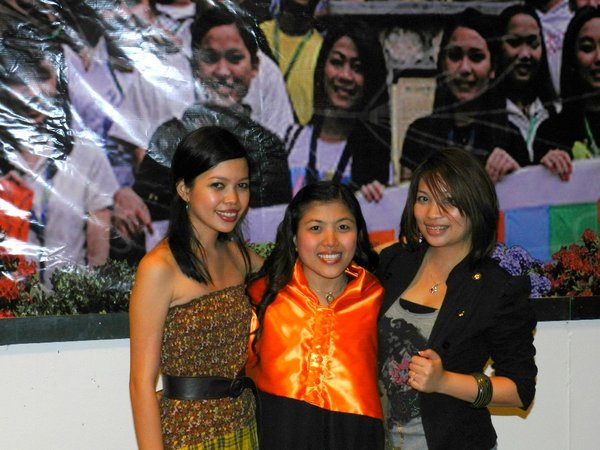 last week, another good friend of mine received her master’s degree. if we were shocked to learn that she was graduating on that week, she was even more shocked to find out that she was graduating, period. haha. she said she only knew about it three days before the graduation date so everything was done in a rush, although she had her hair nicely curled like she had all the time in the world for it. =p

i’m ashamed to say that i missed her walking on that stage too. i assumed that with the number of graduates, they would call the ones with the master’s degrees last. so ram and i had burger and cheesy fries in the school canteen while looking for gayle and al john who were, in fact, inside the building. and there we were looking for them outside. duh!

but the thing is, just because i missed both their glory moments doesn’t mean i’m not proud of them. because i truly am and i consider myself lucky to have such amazing and intelligent friends who may not be as smart as me but hey, at least they’re trying! lol.

till the next accomplishment, ladies! =)