ever since my sister bought a dvd of junior masterchef australia, not only did i find myself bumming in my parents’ room enjoying their new “theater system” but i also found myself conversing with my sister with an outrageously fake, trying-hard australian accent. we find it amusing listening to each other talk like idiots who keep saying “i dirnt knir.” because it’s the only sentence we could get right.

but while we failed miserably in achieving a flawless australian accent, we accomplished the task of cooking chicken schnitzel from scratch. and by “we,” i am referring to myself as my sister’s little helper. in this family, i am a sous chef by default.

however, i do make a very good food critic. my tongue is taste-sensitive as it is honest. in tonight’s dinner i remarked about the saltiness of the eggplant, only to be reminded that i was the one who over-salted it. let’s just say i got carried away that for once, i took on a bigger kitchen role that is more exciting than wiping and setting the table.

for tonight’s aussie dinner, my sister aka “the chef” cooked chicken schnitzel with a salad of grilled eggplant, tomatoes, bell paper, and fresh mozzarella cheese.

now, schnitzel may sound so fancy but it’s actually nothing more than breaded chicken breast fillet. but instead of using the commercial bread crumbs, we made our our own mixture of “blenderized” bread, parmesan cheese, parsley, rosemary, and thyme. it’s ridiculously simple!

and that antisocial-looking mashed potato on the side is my creation. i was told by “the chef” that i seriously need to contribute something. anything. so i did. my mashed potato may have been slightly undercooked but they actually turned out fine. 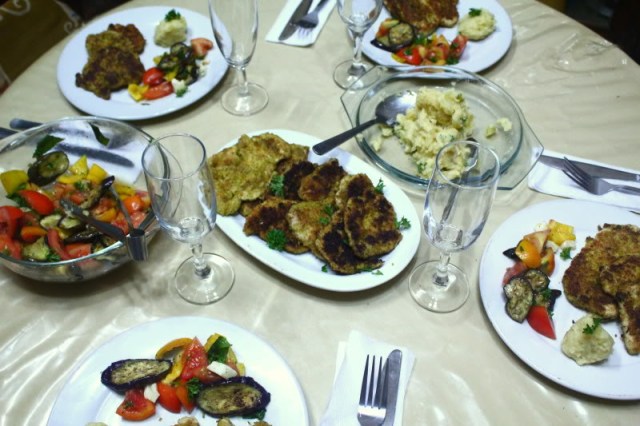 our dinner table. once in a while, we like to pretend that we’re rich. but, of course, the plastic cover is a dead giveaway that we’re not. (like every other traditional filipino, my mom doesn’t want the glass top scraped in any way.)