when the weather’s nice and warm, it’s almost a shame to spend it indoors, really. although i am not ashamed to admit that i don’t exactly find it a shame as i’m the kind who would rather be lounging at home instead. doing, well, whatever i feel like at that given moment. except maybe housework. because f%ck housework. (and then proceeds to load dirty clothes in the washing machine because when the weather’s nice and warm, i’m also one to say, “WHAT A BEAUTIFUL DAY TO DO THE LAUNDRY!” yep, caps lock and all.)

but since i have raven, it makes me feel guilty to waste all that sun on the washing when i could spend the day at the park with her. it’s almost like a battle between having a (somewhat, but barely) clean house and a dirty kid with a good childhood exposure to germs. most days we end up just chilling at home where she gets to play, eat, and nap on time. on those days, i feel like a bad mother. not exactly the neglectful kind. more like the lazy kind. either way, it’s not a very nice feeling.

recently, i read an article that appeased the tugging guilt within. i wish i can link the actual piece of writing here but i can’t find it anymore. it was just one of those random stuff you click on while browsing down your facebook feed.

anyway, the point is, INDOOR PLAY IS JUST AS GOOD AS OUTDOOR PLAY.

that makes me wanna breathe a loooong sigh of relief. i guess i’m not such a bad mother, after all.

a lot of what the author wrote made sense. as parents, it seems as if we spend a lot of our energy planning outdoor trips for our kids, which is well and good. nothing wrong with that. on the other hand, it’s alright to just let them be at home, as well. let them get bored. let them create their own fun. give them the space and the freedom to be comfortable in their solitary play. to be at ease in their own company without having to travel far and wide to find it, or for you to organize it for them.

that’s the take home message i got from the article, anyway. not so much to justify my being a homebody, but it sure pleases the libran in me. because i like the idea of duality. i like the concept of balance. i watch my kid sprawled on the floor, one foot dancing up in the air as she scribbles on a large drawing book and i smile. she’ll be alright.

just as i also like the fact that my younger sister makes up for what i lack and does the outdoorsy stuff with her. her being an early childhood educator really comes in handy so, of course, i take advantage of her knowledge and practical applications to the fullest extent. 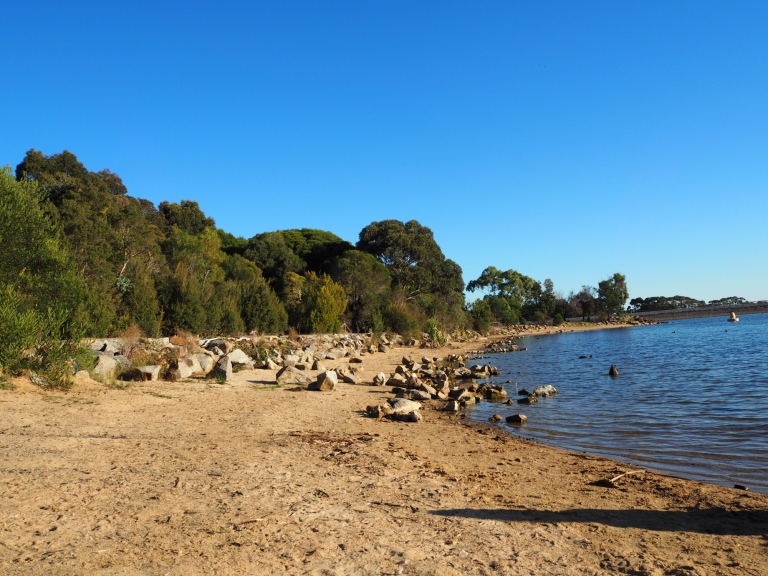 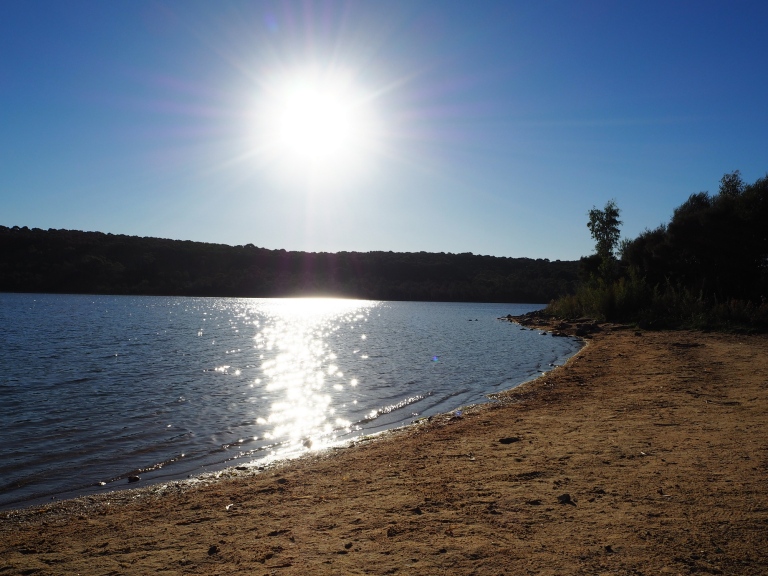 i remember this day. the march afternoon still had what’s left of the day’s summerish heat. the sun took her sweet time to set, giving us a bit of extra hours to linger on the edge of lysterfield lake and when she finally did, it was glorious. as always. 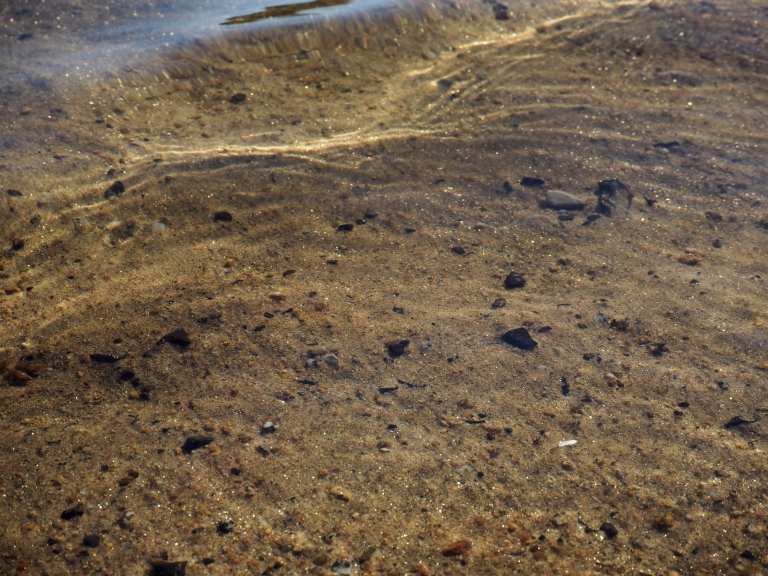 and yes, little flecks of gold really do sparkle through the clear water. but it’s one of those things that you only notice when you take the time to stop and have a good look. there’s almost like a hypnotic quality to it — standing on the edge of the lake, the coolness of the water hugging your ankles while you watch and hear the endless cycle of small waves flowing in… and out… in… and out… slow, deliberate strokes. concealing and revealing the tiny glittering treasures underneath.

jeff was right all along. i thought he was just talking sh*t, making up all these nonexistent trivias for my sake, and for his entertainment, knowing i’m the type to soak up random snippets of information like that. 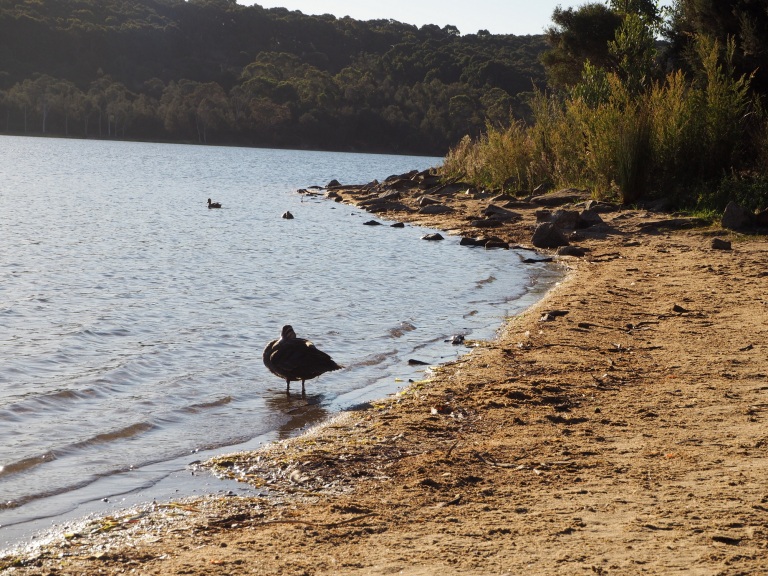 “look, raven, ducks!” we kept pointing to them, if only to distract her into getting her feet into the water that was already turning cold. we had been trying to get her to wade in the shallow depth, like those ducks, but she didn’t like the sand on her feet. her little toes curled in and she spent a big chunk of her time just sitting on the shore not wanting to move lest she step on sand which was, well, everywhere. poor kid. 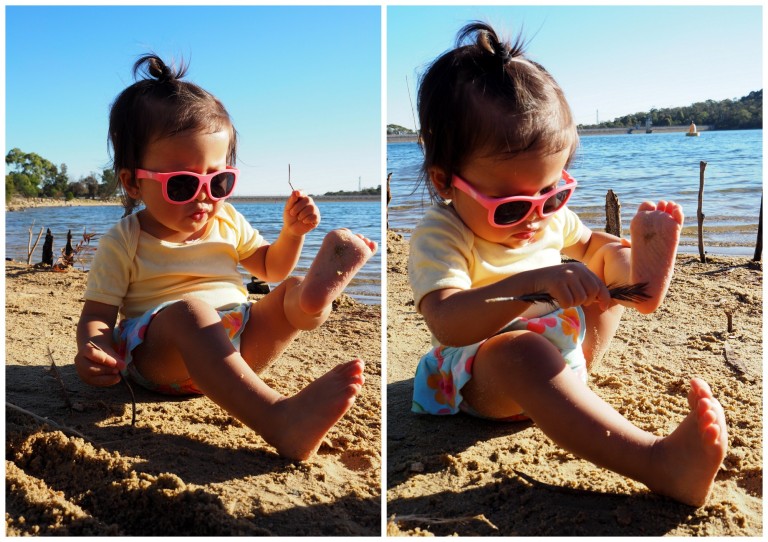 as much as i saw her discomfort, i restrained myself from scooping her up and taking her in my arms like she wanted me to. i don’t know what lesson was subconsciously imprinted on her growing brain but i hope it had something to do with resilience. because when she grows up, getting sand stuck between her toes would probably be the least of her concerns. and besides, she needs the sensory learning experience. the kind nature play enthusiasts the likes of my sister rave and preach about. 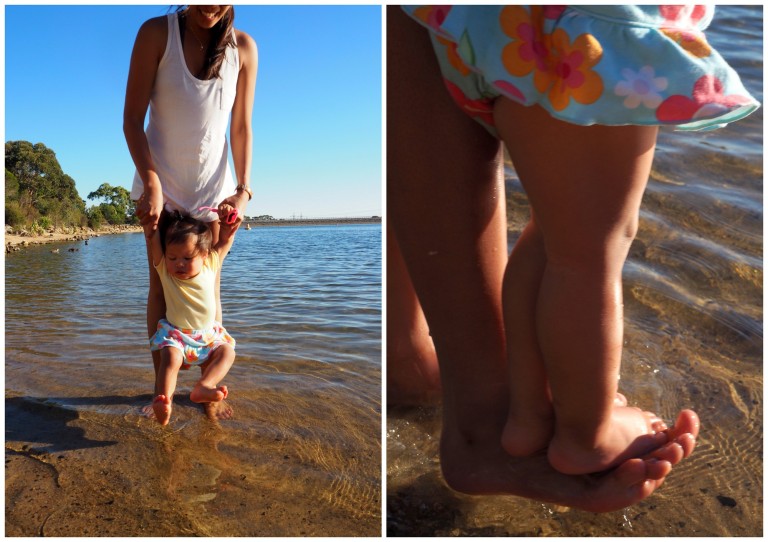 she had to do what she had to do in raven’s case, though. it was quite a funny sight. having to hold and walk raven like that must have been an upper and lower body workout in itself already. 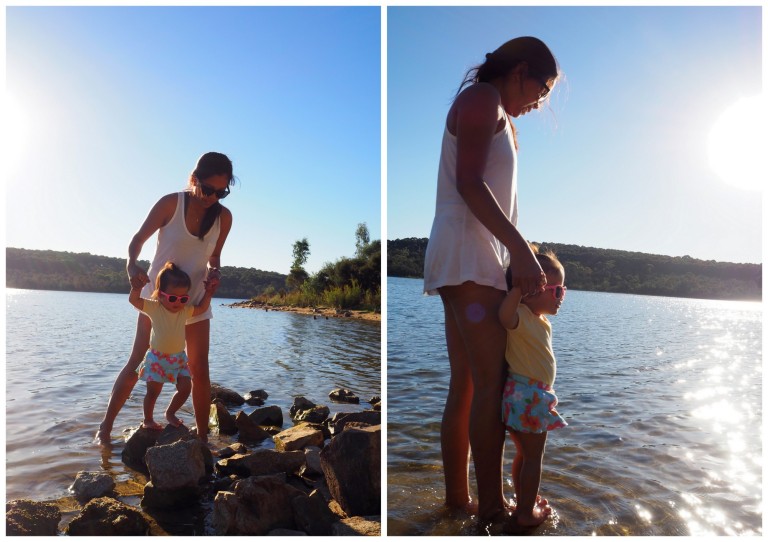 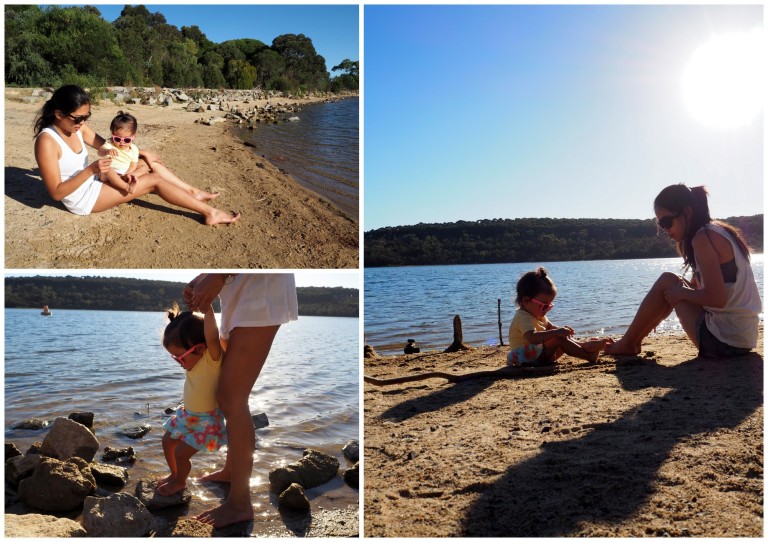 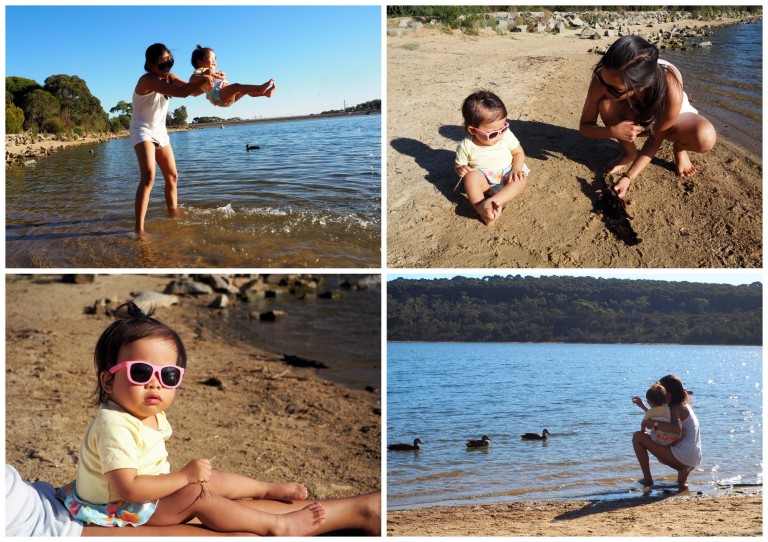 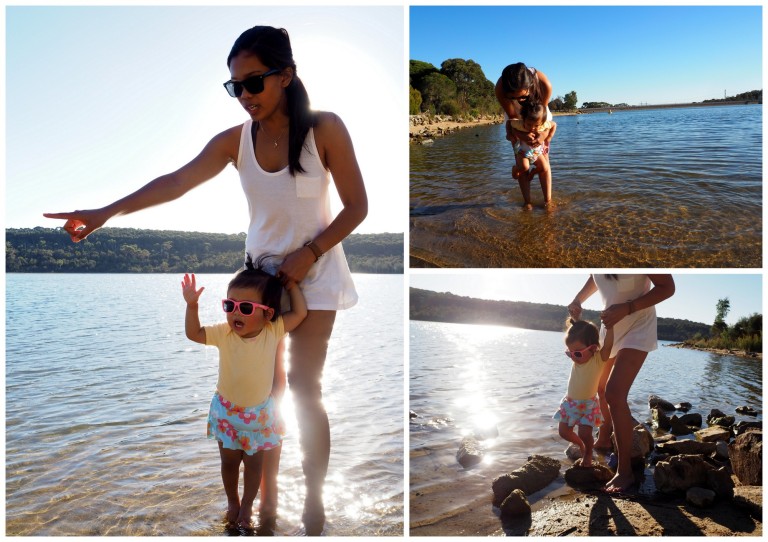 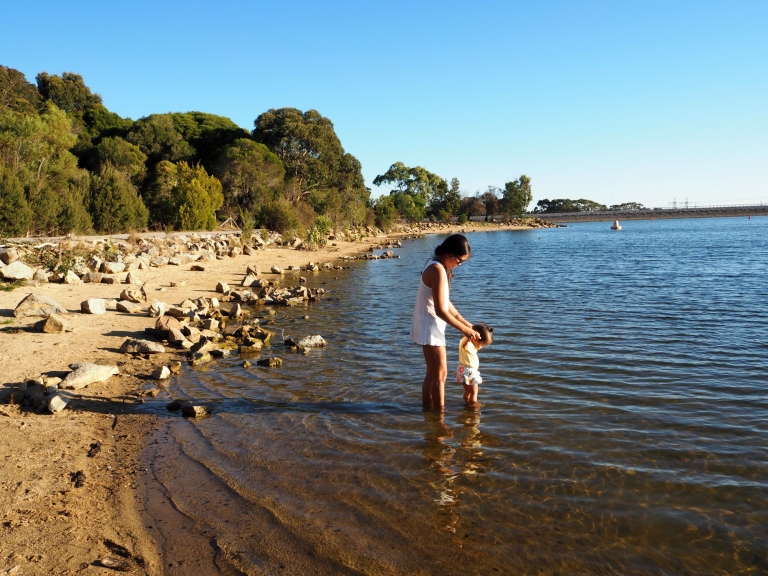 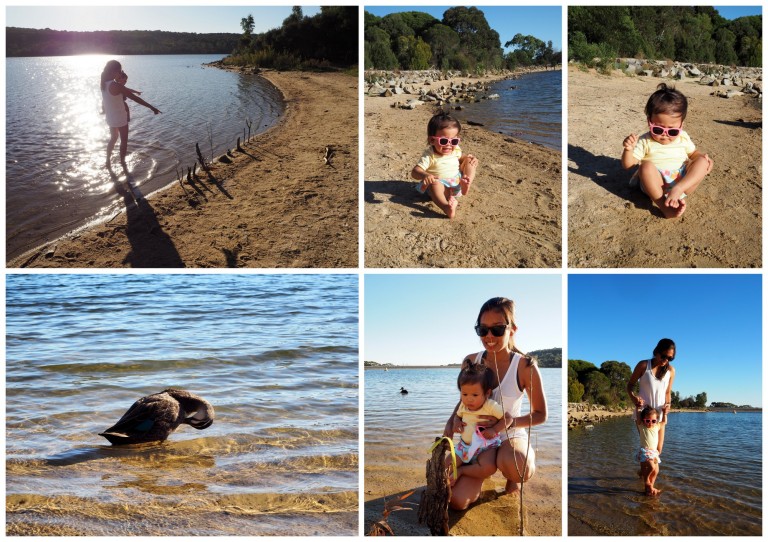 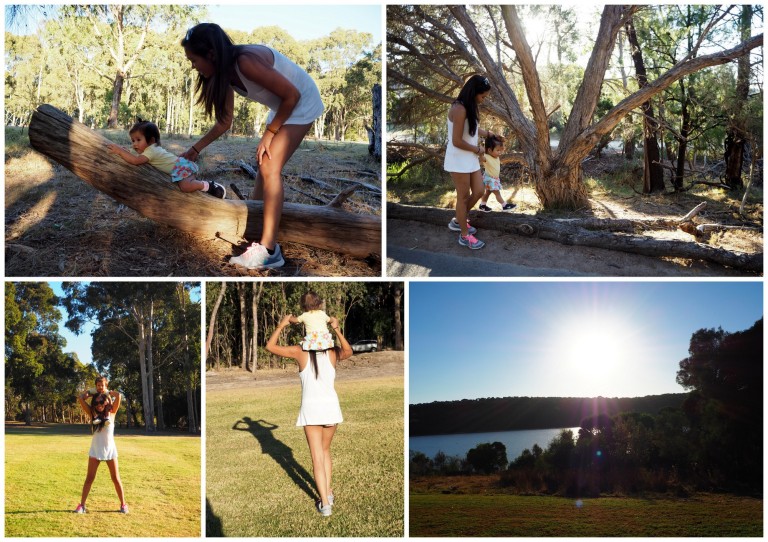