i have lived in cebu all my life. i know the city like the back of my hand — so much so that i still get lost in the complicated streets of colon, reputed to be the first and the oldest in the philippines. but like every true-blue cebuano, i always find my way through the dizzying maze of corners and crowds somehow. because when you’re in the downtown area, gaisano metro is your true north.

it’s funny how the city, with arms stretched out to embrace you, has a couple of secrets tucked under her sleeves. like the fact that at the corner of v. gullas street and jakosalem street is a museum dedicated to the musical heritage of cebu. or that a rare spanish-era coral stone bridge still exists deep within the heart of the city.

once you get over the feeling of being betrayed, it’s astonishing to know that all these cultural and historical sites were right there all along and you’ve passed them by a hundred times.

they’ve been there for a hundred years. 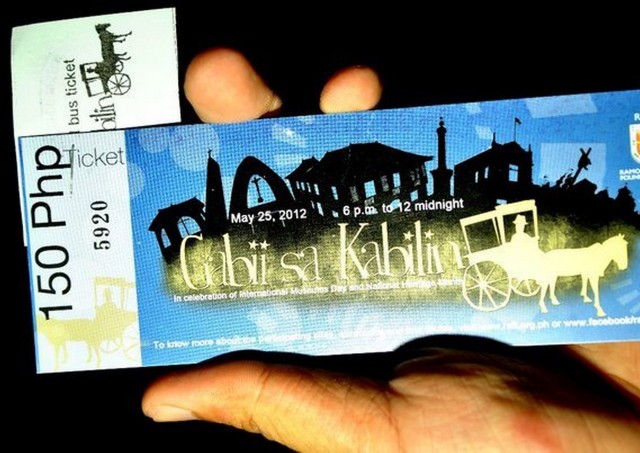 i love visiting old houses and museums because i’m boring like that. i’m the kind of person who gets blown away by authentic old spanish architecture or any structure that looks old, period, regardless of its physical condition.

you should’ve seen me on that negros occidental trip. it was my playground! hands down, one of the best trips ever!

colon street, the first and oldest street in the philippines

so anyway, on the balmy night of the 25th of may, my friends and i found ourselves wandering around the streets of colon, together with other people doing the exact same thing. and why wouldn’t they? gabii sa kabilin (night of heritage) was the perfect excuse to stroll along the streets without having to worry about getting robbed and/or chasing robbers, as what colon street may, sadly, be infamous for.

just so you’d know, gabii sa kabilin is an adaptation of germany’s lange nacht der museen (long night of museums) which has become an anticipated event in more than 120 cities in europe and in south america.

furthermore, according to this official guide i am holding, in 2007, the ramon aboitiz foundation, with its partner museums, staged the first gabii sa kabilin in cebu city, making it the first, and until today, the only metropolis in the asia-pacific region to hold such event.

pretty neat, huh? and for a hundred and fifty pesos, you get to visit all the participating museums and heritage sites from 6pm to 12 midnight or drop dead from acute exhaustion/information overload, whichever comes first, considering that there are 22 sites scattered all over the city to go to at such a limited time.

i’ll share with you that experience in the succeeding posts but i may have to do it in bits and pieces. partly because i don’t want your brain to explode. mainly because i know i’m too lazy to get my shiz together in one go.