when MV Doulos docked in the port of cebu city, i was in high school then, already interested in books but disappointed at the limited collection that the ship had for sale. i purchased a classic, though — antoine de saint exupery’s the little prince. one of my all-time favorites. 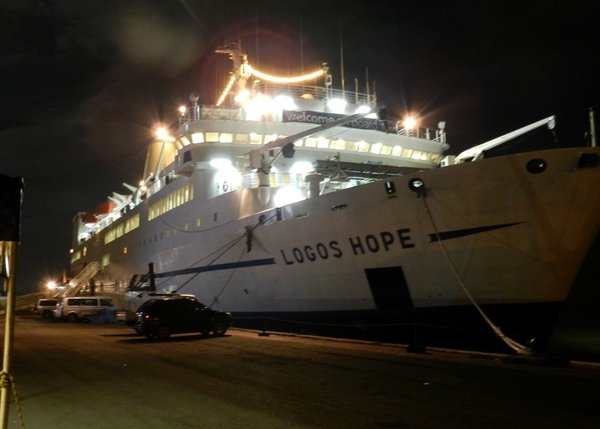 this year, i was excited to learn that the successor of MV Doulos, MV Logos Hope, was already sitting quietly by the port near malacañang of cebu. more excited was i at the thought that i would be going there with my niece, who adores books just as much as her titas do.

my family and i went there at night, after aeva had had a good afternoon nap and after she had a decent dinner with me feeding her while she rode her purple tricycle (our schedules revolve around hers. hehe.).

what i liked about “the big ship” was its multicultural atmosphere, with people from different countries smiling and greeting you a warm welcome. they were very helpful too, with the guy at the ticket counter advising ram, “you can open the lens cover of your camera.” when he failed to take a picture of us after clicking one or two times. a good laugh, at ram’s expense. an example of humor transcending racial barriers. 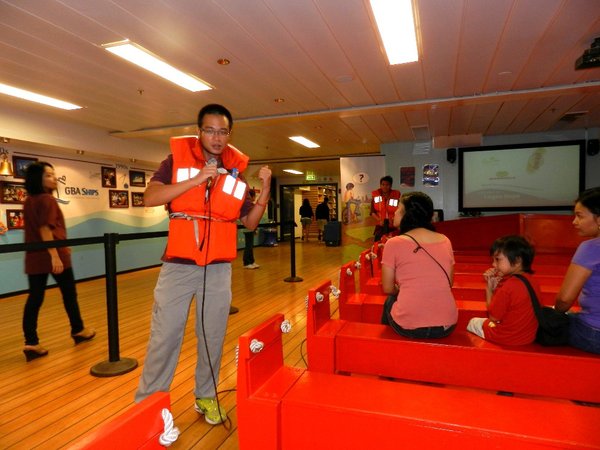 a short film was shown to raise awareness about a worldwide concern i cannot remember now (HIV?) before we were officially ushered in. we were also oriented on the price system, the flow of traffic, as well as the freedom to take photos inside. the staff embraced photography, as evidenced by this crew member who interrupted his talk to strike a pose the moment he saw me aiming my camera at him.

ram said he wants to join the crew; said it would be cool to travel around the world surrounded by books. i don’t know. the dude barely reads, so it was either the idea of sailing into oceans with books galore or the pretty european crew that brought his dormant sense of volunteerism back to life.

an entire wall was dedicated to the history of the ship. looking at the photos was like looking at the world, with the pictures of different people from different countries, and mv logos hope and its crew bridging the cultural differences with messages of unity and hope.

i loved the ship’s wooden interiors, with its minimalist touch and clean straight lines of yellowish brown as a backdrop to the myriad of books and their colors. they had a lot of books and several classics too but i couldn’t find alice in the wonderland. i’ve been wanting to read that book for a year now. as a consolation, i got the word search puzzle book, because i also couldn’t find the number fill-in puzzle that i like so much.

aeva, however, found seven books that caught her fancy — the little einsteins (♫we’re going on a trip in our favorite rocket ship. zooming through the skies, little einstens!♫), handy manny, and of course, her princess books. (she’s belle. i’m tangled. somehow, belle always gets stuck in the mud and i save her with my long hair each and every time. and then she gets stuck in the mud again. that’s how our little play always goes.)

and when she got tired running around or playing with ram (“you’re a duck, gram!”), she looked up at me with outstretched arms and that cute little irresistible face and said “uppie!” i knew the drill. just as i knew that i didn’t have the heart to turn her down. so i carried her for as long as my arms could take it.

after about ten minutes i was tired. so i told her, “aeva, my arms are so tired now. in about two minutes i’m gonna drop you.”

to which she replied with that matter-of-fact look on her face, holding out five tiny fingers before me, “no, five more minutes! and then you can drop me. okay, janjan?”