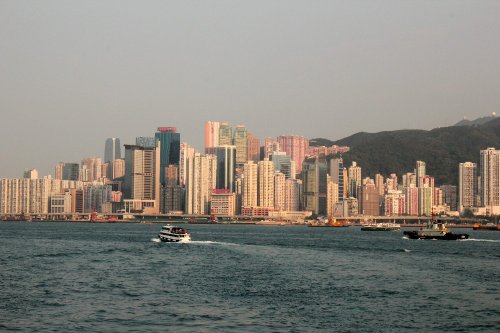 central is the business district of hong kong. there you would see more modern skyscrapers and even more people crowding on the sidewalks, in alleys, beside the pedestrian lights waiting for the red light to turn green so they can proceed to wherever it is they hurry to go to as buses and cars observe proper traffic protocol by respecting the boundaries of the pedestrians’ lanes.

i’m not kidding when i say the streets of central are swamped, especially so in the late afternoon when school children and employees alike march out of their respective buildings to rejoin the rest of the tourists milling about in a kind of unexplained frenzy.

that was the part when i contracted a minor headache. looking at all these people walking and laughing and talking everywhere induced some sort of chemical reaction in my brain which stimulated a mini-migraine which i had to endure for the duration of the tram ride. 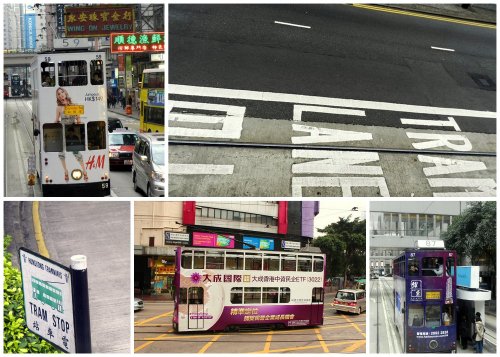 i forgot to mention. yes, we went on a tram ride, which i read is one of the cheapest ways to go sightseeing around central. 2 hong kong bucks from point A to point B deducted from your octopus card (a really convenient method when traveling in hong kong, by the way). another 2 bucks on the way back, which is pretty cheap when converted to pesos — roughly around 11 pesos one way, which isn’t so bad.

hong kong’s trams, though painted with gisele bundchen’s image or other modern advertisements in attractive colors, are actually considered historic. it is one of the earliest public transport in hong kong, operating with the use of electricity since 1904. i don’t know how the system really works but common sense told me that those cable wires above definitely have something to do with it.

trams move rather slowly. i thought they can come and go as they please but as it turned out, they are subject to obey traffic lights too. the only difference is that unlike cars, they can’t swerve right or left as they belong to the tram rails. the slow pace comes in handy with the sight-seeing. you can take pictures of buildings that catch your fancy or simply sit back on the hard brown chairs as you watch the kind of hurried environment that the city of central portrays to be. (although it may not be very enjoyable when you’re nursing a headache.)

when the scenery of endless crowds and unfriendly concretes become punishing to the eyes looking for a reprieve, of course there are always the doves, which you can find anywhere as long as you don’t stop looking. =)