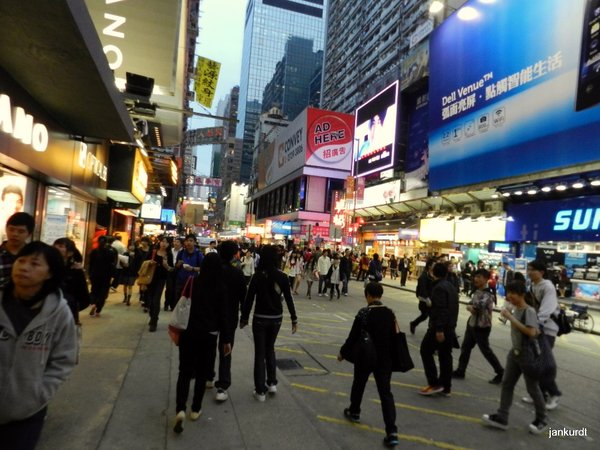 a place in hong kong i personally compare to cebu’s dowtown area, mong kok was just bursting with life and people — crowds and crowds of them. it was fascinating to watch until i realized i was kind of holding up the traffic standing there in the middle of the road trying to take everything in.

everyone seemed to be going somewhere. all i wanted was to find me some food because i was that starved, having skipped lunch in lieu of a good midday rest. they say you can find some really good dim sum served right there on the streets so off we went to find it. only to realize that i like our dim sum better for a couple of reasons. sure, they have the original chinese version of siomai skewered in barbecue sticks with several sauces available, but the problem is, i had no idea which sauce to use. it didn’t help that the vendors there couldn’t speak or understand english. in their eyes, i was more of a foreign nuisance than a curious customer.

but a lot of people flocked there to eat so it must be really good. (as for me, i’d still go for that hole-in-the-wall siomai-an in urgello ram and i both love.) it was okay though, the white ball thingie, if i knew what exactly i was chewing on. because the non-english speaking server wasn’t very friendly and many people were starting to fall in line behind me, i had no choice but to pick whatever looked safe enough to eat. something that looked like squid balls but tasted like something else. maybe it was the unknown sauce i used. i wouldn’t know. so in between gulps of watermelon juice, i forced myself to chew and swallow. there goes our hong kong street food experience. hehe.

there are probably a lot of things mong kok is famous for but as far as i know, locals and tourists alike flock there for their night market, with the entire length of the street filled with stalls of different goods ranging from shirts to shoes to thongs. everything made in china, of course. 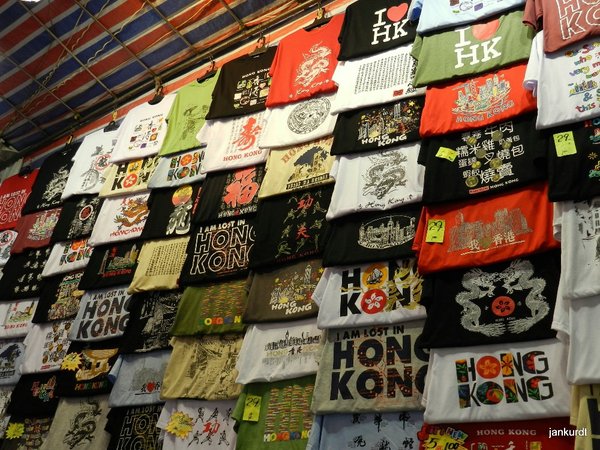 and because everything is made in china, you can pretty much find them here in the philippines. which somehow made shopping quite pointless. not to mention that the vendors, again, were not really customer-oriented, so to speak. you check out their products and they take it as a sign that you were going to buy it. i was scared of those vendors, i kid you not. i was scared to even check out their stuff! i take one look, they come over to me and i swear i could hear my heart pumping as my mind instructs me to walk away.

case in point: a lady vendor approached me after seeing me looking absentmindedly over her display of imitation swimsuits:
vendor: do you like it?
me: uh, no, not really.
vendor: NO? THEN GO. GO AWAY! (shoos me out with her hands.)

i mean, wtf?! i guess when chinese do business, they really mean business. hard-core. no smiles, no warm invitation to check out their goods, no nothing. it almost felt as if the running slogan there was “you look, you buy.”

although i can’t help looking at these cute little trinkets. just looking. because i found them rather expensive, after converting from HK$ to peso. just wasn’t worth the money. (right. as if i had the money! lol.)

mong kok’s empty street looked beautiful at night, though. there’s just something about the lights and the neon signs in chinese characters that draw me in. because it really does paint a pretty modern picture. =) 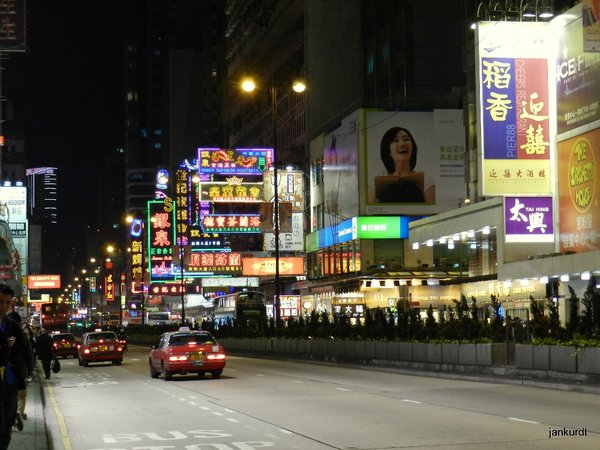