what we thought was a 30-minute bus ride to bais city the next day turned out to be a 1-hour one, with the view of green sugar hacienda stretching longer and longer it started to feel like an eternity. four hours late for the bais dolphin-watching appointment. and yes, we still expected to see dolphins. lots and lots of them.

with my high-tech camera capable of shooting multiple pictures in a single second (i’m being sarcastic. my camera’s outdated as it is.), i managed to take only two pictures of them dolphins. that one right there’s my best shot. so you can just imagine what the other one looked like. 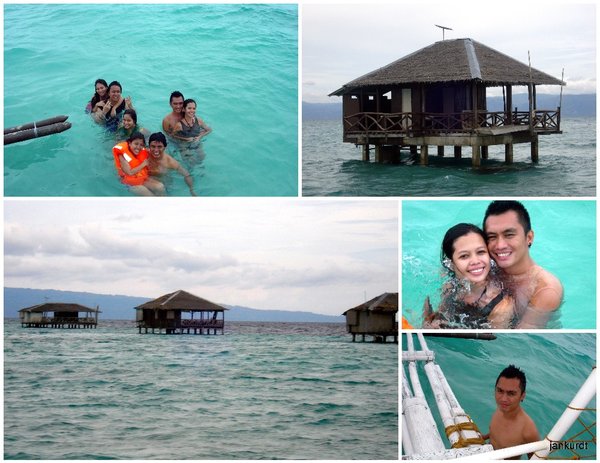 anchored the boat in a sandbar somewhere after it became clear the dolphins were not in the mood to give us a show. i expected a sand bar, alright. you know, with sand? but we couldn’t get any luckier. it was high tide. chin-deep water, at least. that’s based on my height. enough to drown me because of the huge waves coming in from the open sea surrounding the island. but nevertheless, it was still fun. ram had fun mock-drowning me whenever the big waves came in. i can now drink seawater like a fish. if only i could learn to swim like one without my paranoia of drowning kicking in.

oh, and see those cottages there? you can rent them overnight for 2,500 pesos. everywhere you look is the sea around you at night. but not to worry, it’s powered by solar energy. but solar energy can only do so much when your main concern are the sharks. jaws 6 in the making.