the problem with going on a vacation with a large group of people sharing one bedroom with one bathroom is that it takes forever to get the flow going. itineraries with timelines? never heard of that in my people. if we wanna get there, we’ll get there. just don’t expect us to be there on the time you expect us to be there.

so when we said we would leave at 6am for apo island the next day, we basically meant it as a joke. not the funny kind. because almost everyone slept at 3am, woke up at 6am, had breakfast at 8am, and was finally ready at 9am. and still we expected dolphins to join us on our way to the island. we’re optimistic like that.

with the sun already high up in the sky, of course we didn’t see any dolphins on our way to apo island. that was nature’s punishment for us for waking up late. but it was great. i loved the boat ride — with the sun, the sea, the sky, and people i wouldn’t mind sharing a lifeboat with should the banca capsize.

from afar, apo island looked like any other island. i wasn’t really expecting anything much, except that it should live up to its claim of being one of the top 10 diving spots in the world. guess what, it did. the waters were so clear and so inviting i couldn’t care less if i grilled myself alive under the excruciating june sun. it was something close to paradise. but not quite.

because every move you make on the island involves money. you pay for the entrance fee, the marine sanctuary fee, the life vest, the goggles, the lady who cooks for your lunch, the man who watched over your stuffs while you were gone, the air you snorkel in and out, among other things. it’s the local community’s way of thriving. you can’t complain.

but for what it’s worth, apo island was where i finally learned how to snorkel. like really snorkel. i’m proud enough to say that i can now officially snorkel like a pro. although i wonder if pros still gulp in saltwater by accident through the freaking mouthpiece every five minutes or so. because my stomach was half-full of it.

snorkeling in the marine sanctuary was relaxing when i wasn’t drinking seawater through my snorkel. the corals were as thick as they came. the place was picture-perfect. the fishes were bountiful.

and so were the rocks. where i scraped both my knees trying to swim through them. the guide told me not to kick when we were swimming out because we were still in shallow water. i wanted to find out how shallow he meant by the word shallow. i didn’t top the freaking board exams for nothing.

the turtle sanctuary was where my lungs had their ultimate workout. the sea turtles gave us quite an exercise, snorkeling and swimming to get nearer to them, although swimming isn’t the operative word because we were told not to kick our legs or flap our belly fats around too much because it might disturb the serenity of the sea turtles’ moment.

so there i was, kicking and flapping so hard not because i’m smart in a twisted way, but because i was fighting the damn current. after three sea turtle sightings (read: snorkeling around the place a lot seeing only corals and fishes, and then “swimming” frantically towards someone’s direction who shouts “naa dihi!”), i was like, “wtf. i can’t even see the turtles clearly through my fogged-up goggles.” so that was when i decided to just chill on my back, absorbing the harmful UV rays of the sun on my face. that was my moment. that was the autistic me taking in the sound of the waves, the smell of the sea, the sight of the clouds, the warmth of the sun, the taste of salt on my lips. wondering how the hell i can afford to pay my debts.

if the turtle-chasing activity were a contest, ram and heni would have been a shoo-in for the first and second place the way they played the game with such energy and passion. according to ram, he was one millimeter away from touching the turtle but the life jacket kept pulling him up when he was fighting to swim down. his version of “the girl that got away” story. only, in his case, it was a sea turtle.

the late afternoon sun sending glitters on the water was so pretty it took my breath away. i just had to stop and take a hundred pictures of it. it’s the kind of scenery i always take the time to appreciate and thank God for such beauty. memories of my last moments in the island.

indeed, apo island is a paradise in its own right. it’s a diving spot, alright, so don’t expect endless shores of powdery white sand. like i did. if you want more of the sand and less of the rocks, then apo island would only disappoint you.

passed by this little store selling hand-carved items. (do some people carve with their feet?) amazing talent those brothers have. i was instantly drawn to the framed faces displayed on the floor because it reminded me of my sister. would’ve wanted to buy one for her had i not been floating in the shores of economic depression. it was 500 pesos a pop. so i just took a photo of it so my sister could see it and pretend that it’s hanging in her bedroom wall.

what i did buy her, though, was this indian woman who had a seashell for her headpiece. kind of creepy but cool at the same time. i even met its carver in person! amazing skill. talked to him for a bit. learned that he and his two brothers share the same talent. one that they inherited from their father. i’m in the habit of interrogating people. smart questions, dumb questions, whatever moves me. like when i commented, “indian lagi imong tirada noh? mo carve sad ka ug mga tribal2x?” to which he politely replied, “tribal man ni tanan among gipang carve dinhi.” 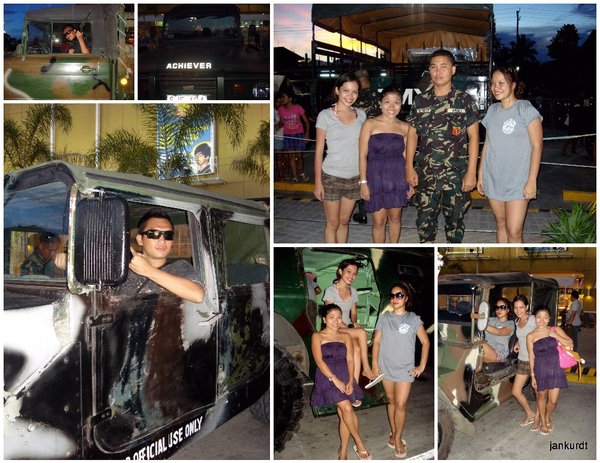 stopped by robinson’s dumaguete on our way back. posed for a few photos with the military vehicles on display outside in lieu of the independence day celebration. was able to see the interior of a military tank (?). not pretty. not comfortable either. but then again, wars aren’t meant to be pretty. or comfortable. or painted in baby blue, like i would’ve wanted the vehicles painted to make it appear more civilian-friendly.