i was on the point of exhaustion on the entire trip to kuala lumpur — from the 1-hour plane ride to malaysia to the 3-hour bus ride to KLCC — i drifted in and out of sleep the whole time. i was just so tired from all that walking in singapore even the excitement of seeing another country was drained out of me.

our check-in time at the hotel wasn’t until 2pm. my sister and i thought it would be an adventure to sleep at the airport lobby but we were just so dead tired and the thought of a real bed was both tempting and comforting that my sister called the hotel to ask if we could check in at 3am instead. thank God they reconsidered. i just wasn’t in the mood for an adventure that night, not to mention that the airport was swamped with people even at such ungodly hours, with both foreigners and locals alike. some even brought along their sleeping bags for a more comfortable airport slumber. the moment my head hit the fluffy white pillow, i was in heaven for a good night’s sleep (finally!).

The Heritage Station Hotel is a 100-year old structure which was originally Kuala Lumpur’s first railway station, if i understand correctly. based on my limited research, it’s even older than malaysia because the latter is only 50 years old. so to stay in a 100-year old hotel gave me a certain thrill. it definitely smelled old. my hyperactive imagination made me wonder what events and happenings transpired during those 100 years that only the hotel walls bore witness to, as the characters of the stories may long have passed away.

and ghosts? nah. i didn’t wanna dwell on that. it’s a 100-year old building, for crying out loud! i figured if i so much as thought about invoking one spirit, thousands would probably come haunting me with their historical tales. it can get really creepy if you think of it that way.

to prove how the hotel is sticking to its roots, notice how ancient-looking the reception area is. (just as i noticed the receptionist guy was kind of cute but don’t tell ram i said that ‘coz i kind of mentioned it to him once and he wasn’t too happy about it. mainly because the guy wasn’t his type. lol.)

our room was, of course, old too. it had an adjoining dining area with cabinets but we really didn’t need that because what was terribly important to us was a bed (they had a four-poster bed) and a bathroom. the rest we could live without (like that television set which only had three or four channels — all in a language we couldn’t speak nor understand). but it was okay, the room. pretty decent, considering that we were on a budget.

the morning came with new sights and sounds. we toured around the hotel and saw brilliant architecture outside, although i’m not really in the position to talk about “brilliant architecture” because i have zero background on that. but to say the least, it wasn’t the kind of building designs you would usually see in modern cities. no blinding glass windows. no skyscrapers that would give you a stiff neck looking up at them. the buildings within the hotel’s vicinity, anyway. 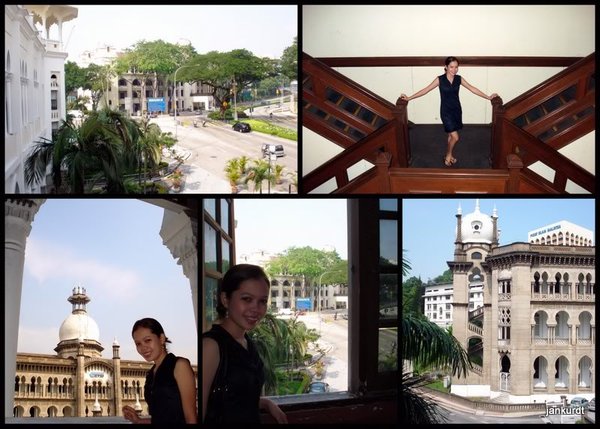 the hotel we were staying itself had its own grand appeal too, once you get past the broken fixtures and unattended clutters in the balcony. i don’t know if the balcony was off-limits but there we were, my sister and i, snooping around every crook and cranny for that perfect shot of the world outside. 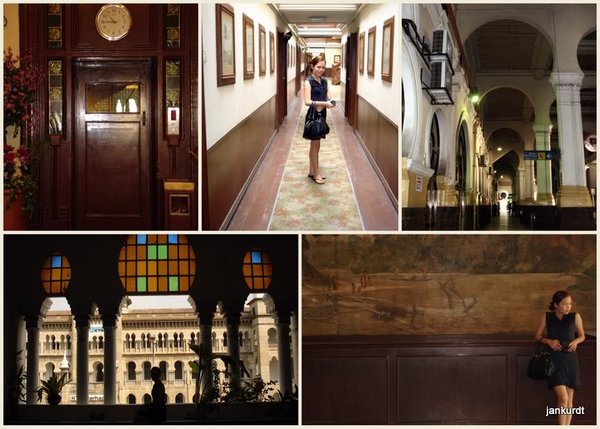 i think i need to address the existence of the elevator here. it’s not spectacular or amazing in the modern way because it was slow and the doors were made of wood. what is special about it, though, is the fact that it’s the original elevator from years long gone. quite antique, but still functioning, nonetheless. that elevator’s older than malaysia itself. it’s malaysia’s ancestor, if you really think long and hard about it. 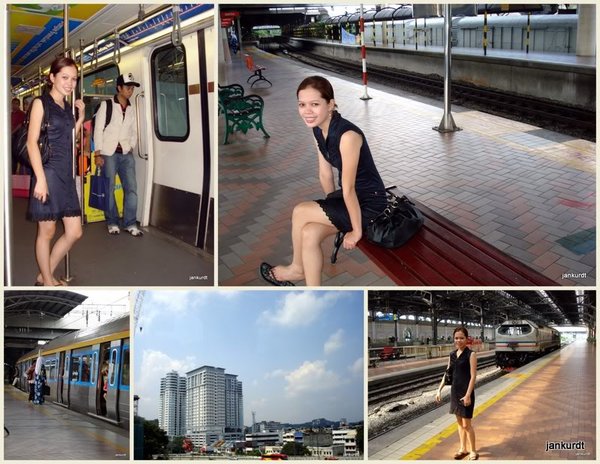 what i loved about the hotel we were staying at was the location. it was quiet and oldish. it was like living in the past. but the train station nearby was probably what i loved the most because it was old-fashioned. the trains going there were the older trains, not the faster ones running around the rest of the city. i loved walking along the empty platforms, sitting on the wooden benches waiting for the choo-choo train, marveling at the backdrop of the old malaysia. it was a small train station but in those two days we were there, i grew fond of it almost immediately. weird, but i even miss it right now while i’m writing this.

on our first day in the city, we visited the famous Petronas Towers. it’s big. it’s shiny. it’s really tall. it’s amazingly shiny. it’s amazing, if you’re a lover of buildings, which i’m not. so those are probably the only adjectives you would ever hear from me, redundant as they may be.

unfortunately for us, though, they ran out of free tickets to go up to the tower bridge so we were just content to stroll around what seemed like another huge ayala park. contrary to my expectations, malaysia’s clean, too. i heard it was just like the philippines but it’s actually not. i don’t know why some people would say that when it isn’t. there may be places that are dirty but most of the places we’ve been to aren’t littered with garbage everywhere. just as not all places here in our country are dirty. something like that.

most of their taxis there do not run on meters. the driver usually sets the price and if the passenger agrees to the rate, then off they go. the problem with that system is that if you’re a foreigner and you’re not familiar with your destination, you can easily be duped. like i think we were. hehe. but i guess that’s the fate that’s bound to happen to every foreign traveler.

since malaysia is a muslim country, you can expect most of the women there to be wearing these really long robes which cover the female body from head to foot. some of them have these black robes on which cover everything but their eyes, and it always, always made me ask myself, “how can their husband recognize them from a crowd if there are many of them wearing the exact same thing?” i mean, what if the guy gets the wrong woman? and no, that’s not a shallow question. i really want to know. 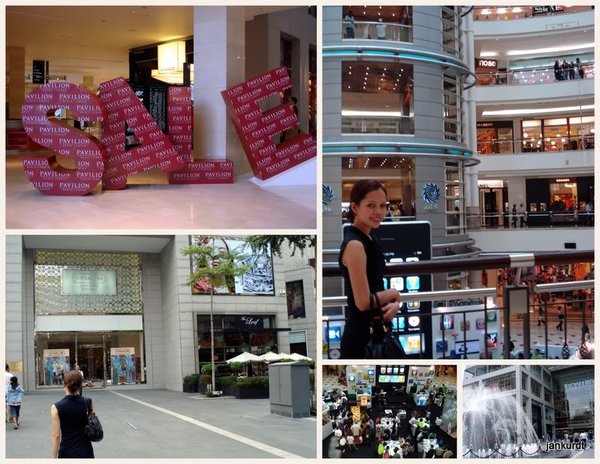 the shopping malls in malaysia are really posh, especially those in the KLCC area. and when they go on sale, they really go on sale, with at least 50% discounts on regular items. here, the 50% discount tag is only on those items that are well on their way to becoming rags. at least most of the items are, with the exception of Black Sheep, of course. my sister and i went crazy during their last sale! we’re good shopping partners, economics-wise, but with such kind of partnership, we may as well be broke for the rest of our lives.

speaking of “the rest of our lives,” i met my future brother-in-law at chinatown that day. my sister had quite an effect on malaysian guys — they gave her discounts and freebies and stuffs while i simply evaporated into the mist. na out of place akong beauty! haha. 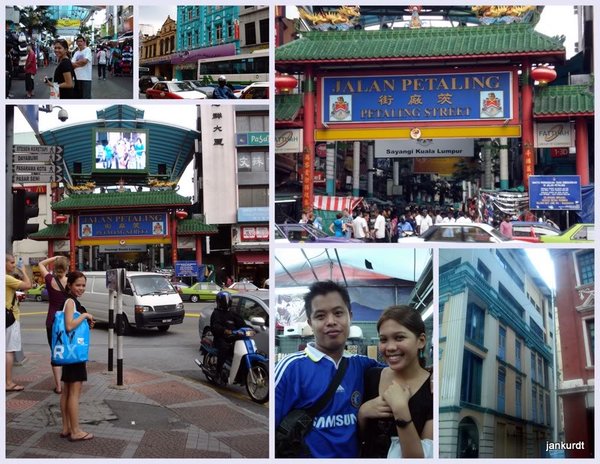 Chinatown is, as expected, full of class A imitations. name all the expensive brands and it’s there. my sister even got a free Chanel necklace from her adorable “friend-friend” as a remembrance of their twenty minutes together. very smooth guy. i couldn’t resist taking a picture of them together. trust me, i could tell he was smitten. kulang nalang makigminyo siya sa akong manghod! goodluck nalang jud sa nawng sa akong mga pag-umangkon! wahahaha!!! =p

oh, right, chinatown. well, chinatown is like one very big Colon Street. the things that are sold there are the same ones sold here. you can therefore conclude that eveything is made in china these days. but of course, they wouldn’t call it chinatown for nothing, right?

weirdly enough, though, the chinese resturants there didn’t know what siomai or steamed rice was. i don’t know why. i figured they had another name for them. but then it got me thinking — either siomai is not really chinese, or those chinese people who look chinese and talk chinese aren’t really chinese. whatever.