the only problem with Singapore’s seamless train system is simple — me. with all its signs and posters plastered right in the middle of everything, i still couldn’t get it. i was like Alice lost in a wonderland of signage galore. an illiterate Alice at that. a hopeless case.

i don’t know why but i just didn’t really get it at first. sure, i could find the location of the place we’re going on the train ticket map but i, for the life of me, couldn’t figure out which platform to take. right or left? i always got stuck with that.

just as i always got stuck in that — what do you call that thing? — where you tap your ticket and pass through revolving metal bars or plastic wedges opening and closing. i kept holding up the flow of the traffic. my sister had to bail me out most of the time and it was really quite embarrassing but i wasn’t embarrassed about it, to say the least. i know it wasn’t me. it was the f*cking tickets that wouldn’t work! or maybe i was merely an instrument used by the train gods to test the singaporean commuters’ patience. haha.

one thing i noticed about singapore is how fast everything and everyone there seems to be. their cars go at a minimum of 60 km/hr in normal traffic. everyone’s racing each other. and the only time the cars stop is when the light turns red. it’s definitely not the kind of traffic we have here in the philippines where we are virtually parking our cars in the middle of the street waiting for a traffic enforcer to settle the “who-rammed-who?” dilemma between a jeepney driver and a taxi driver, who may be both to blame.

their trains are really fast, too. but rest assured it’s a smooth, airconditioned ride. no pushing or shoving. if you missed the train, not to worry. another one’s coming in 5 minutes. and what’s 5 minutes for a filipino like me? just enough time to watch the world and the people go by. the philippine traffic at least taught me patience after it taught me to curse.

speaking of people, i have observed that the moment the commuters get inside the train, they start pulling out their phones and their ipods, automatically lost in their own solitary world in their own music. autistics, i would say. but i don’t mean that in a bad way. it’s just that they seemed so absorbed that the only thing they would notice is their train stop. no chit-chats. no nothing. semi-silence. hushed talks. polite smiles. never rowdy.

i needed the silence. apart from the life-transforming thoughts i gathered inside my head, the silence allowed me to listen carefully to the automated voice machine informing the commuters where they are and where the next train stop would be. but like a last song syndrome, that automated voice would stay with me throughout the day — “doors closing… titititit… next stop: bugis.”

my sister and i had breakfast at bugis that morning. brunch, actually. street food. the very clean version of our local carenderia. i couldn’t read chinese so i had to choose among the meal pictures. it’s a good thing they give customers a lot of choices. and their serving is huge! it’s definitely cheaper than in the restaurants. and you don’t even have to worry about cholera and whatever it is that you worry about your health when dining in foreign lands but never get to worry about while you’re eating ginabot in our own streets.

after putting our chopsticks down (i’m getting so good in using the chopsticks now that i can even pick the molecules of water in my soup using chopsticks.), we walked around the area and tested our leg muscles’ abilities down to their limits. it was noontime then. sure, the sun was right there and the oils on my face were accumulating but weirdly enough, i wasn’t sweating at all. and i’m talking of hours of walking while carrying a backpack here. here in the philippines, i don’t even do a lot of walking and even when indoors, i’d be sweating like a well-fed piece of swine.

the reason our poise wasn’t all that grand during this trip was because we had to be at the airport later that night for our flight to malaysia. we had to make the most of our time — even if the backpacks would kill us if the exhaustion failed to do the job.

walking around singapore is like walking around ayala park. it’s one huge ayala, the way i saw it. we’ve already established the fact that it’s clean. i’m telling you now it’s also quiet. on that day, i only heard car horns blown twice — once, from a distance; twice, from nearby — when we crossed the street without looking and the guy blew his horn — at us. who would have thought we would become a recipient of such rare singaporean event? =p

along the way, we met this deaf guy who showed us a letter for us to read explaining how he’s in a charity and selling key chains for the organization. my sister can do the sign language — very badly. it made me wonder how she ever became a SPED teacher in the first place when all she can do in sign language is “hi!” when she made that sign on him, he then started making all these complicated signs, automatically assuming my sister would understand whatever point he was making using hand gestures.

my sister then gave him another form of sign language — a facial gesture obviously imparting the words “huh?” and “i don’t understand.” it was so amazing i couldn’t help but laugh. sarcastically, of course. the guy asked her where she was from and she had to do the alphabet sign language of “p-h-i-l-i” rather badly because she kept messing up the letters. as some sort of desperate act, she even shouted the name of our country to him and gently, as a big sister should, i reminded her that she’s shouting to a deaf guy.

i was just a spectator of my sister’s fall from SPED grace. while she made a fool of herself, i made a fool of mine — i was the one who bought the SG$10 key chains he was selling. good thing he gave me a 50% discount. but still. but it’s really cute, though. i should’ve taken a picture of it right before i gave it to ram and right before he misplaces it. and besides, it was for charity, right? right.

we stumbled our way into the National Museum of Singapore by accident. it was just in the neighborhood where we were lost in so we decided to grab the opportunity to get ourselves acquainted with Singapore’s past, as young as she may be. nothing much but pictures of her ancestors and all. but i was amazed when i saw puso hanging from a model of a cart used by their ancestors in selling food. my mom told me puso can only be found here in the cebu and as a lover of puso, i was quite proud of that fact. turns out my mom got the information wrong too. but for what it’s worth, i never once saw puso in the modern-day singapore. so maybe cebu is the only place in the world left where puso is sold.

i loved the museum’s interactive exhibits. they give you this big yellow green ipod-looking thingie that would guide you through the exhibits. you just press a button of the number found on the floor that indicates where you are and from your headset, you can then listen to an audio recording narrating the history of the artifacts, as well as the stories of singapore long before. no need for a human tour guide. and you can go at your own pace, skip the boring parts in favor of the more interesting ones. however, the very best thing about this museum trip was that finally!, we were allowed to leave our baggage inside clear automated lockers where you just punch in a single digit password. the feeling of being unburdened was simply euphoric! 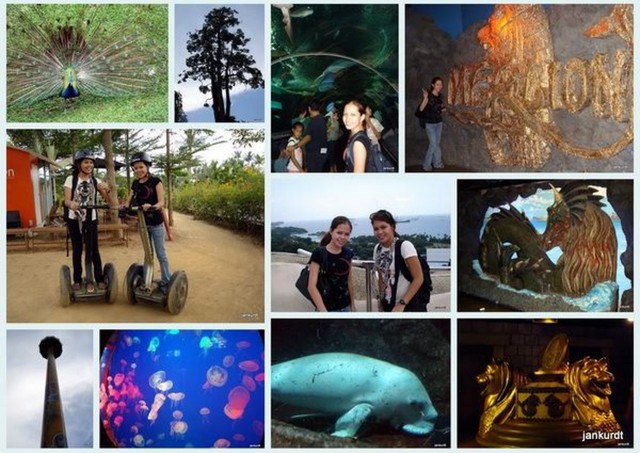 Sentosa Island, being our last stop for the day, was both fun and disappointing. it was disappointing because we missed the dolphin lagoon. the underwater world was nice but very crowded. there were kids and adults everywhere. i loved the jellyfish exhibit, though. i thought their color-changes had something to do with the light but now i know that it really is their nature to change colors when they feel like it. am i correct? ‘coz i’m still not so sure about this fact. i merely deduced it. haha. the sky tower gave a full view of singapore and malaysia from 131 meters above sea level. you’ll see buildings still under construction, the sea, some trees, millions of clouds, the same thing you’d probably see everyday, only it’s from a bird’s eye view so everything appears smaller. so-so.

but what i loved about sentosa was siloso beach. after one whole day of staring at buildings and concrete, the nature lover in me yearned for something more, um, natural. something pleasing to the eyes. and even though the beach, like everything else, was artificial because it was man-made, i was willing to forgive singapore for that. the beach, man-made or not, is still a great place to be. =) 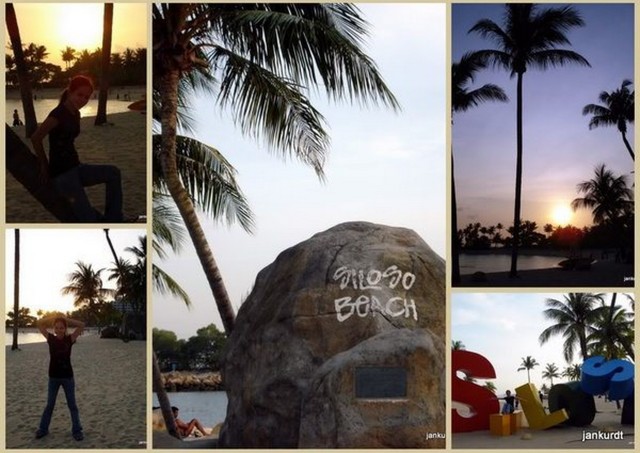