i have been to st. kilda several times before but it never ceases to amaze me how some things can still be a complete revelation. because the whole time, they were just there all along and i might have been too absent-minded to notice. but that’s just me, though. i admit, sometimes i do have this tendency to look but not see, drowning in my shallow well of convoluted thoughts.

yes, i do think a lot. i like thinking. but more than that, i like analyzing my thoughts. i can be quite a philosopher when the mood hits me. i’m the kind of philosopher who takes the entire universe and everything in it into consideration. swallowing both truth and fiction equally. believing for the sake of open-mindedness.

in short, i can be so gullible — and that’s the truth, plain and simple.

so when jeff told me that one of the biggest cruise ships in the world was docked somewhere in st. kilda and was run by hundreds of men who manually row the ship, i took that piece of information like i had just received word that i won the lottery — with the lethal combination of disbelief and ecstasy similar to the feeling of shocked awe that you get when watching ripley’s believe it or not.

with eyes as big as saucers, i exclaimed, “REALLY?!”

until now, when he brings that anecdote up, he still laughs. he obviously finds my naiveté quite amusing, much to my chagrin. cheeky guy.

anyhow, on that particular sunday last february, after regaining whatever crumb of dignity i could salvage, we walked along the upper esplanade in st. kilda where an old clock tower stands. it’s almost 82 years old, that clock tower. unveiled on the 23rd of august 1932, it was built in memory of mr. carlo catani, a former chief engineer of the state public works department in 1918. but that’s the boring stuff.

the more interesting stuff is the st. kilda esplanade market happening every sunday. i love sunday markets. i enjoy watching all these fascinating displays that showcase the shop owners’ talents and interests, especially when they sell handmade products which reflect their individuality.

and you have to admit: in this day and age where everything is made in china, it’s a refreshing change to see something more labor-of-love-authentic, if you know what i mean. 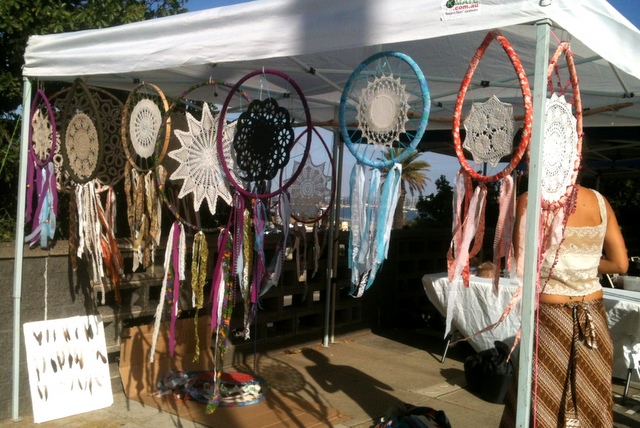