allow me to take a break from palawan for a while. as much as i love to share with you some gorgeous (relatively speaking, because i’m no pro when it comes to photography) photos of the beautiful islands of el nido, i feel like i’ve droned long enough about that trip.

let’s look at some fresh new scenery, shall we? 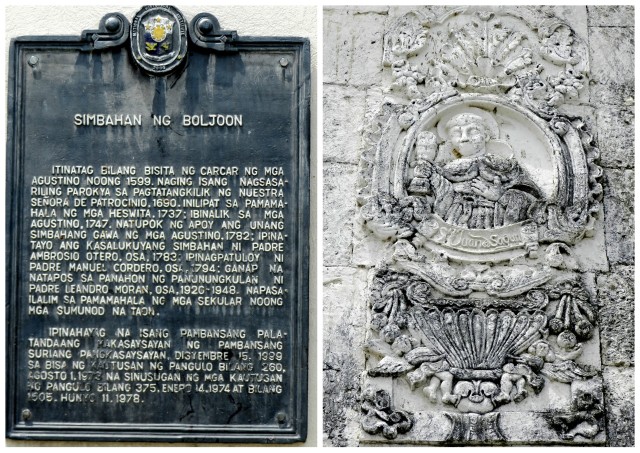 along the way, we stopped by the church of patrocinio de maria in boljoon. even though i’ve been there before and even wrote about a piece of its very interesting history here, it’s still nice to discover some new angles that you never noticed on your previous visits.

it’s already a given that this 18th-century church has one of the most striking paintings on the ceiling done by unnamed local artists generations ago. the heavily sculpted wooden altar just as elaborate. (photos on the above link)

on my first visit, i focused more on the main areas of the church — the altar, the ceiling, the bell tower (i’m crazy about bell towers!), even the pulpit. what i failed to check out was the baptistry adjacent to the main entrance. it’s a pretty small room but what i loved about it is the little altar with the life-like painting framed by a colorful ornate carving.

look up and a vision of heaven is also painted right there.

here’s another angle of the church’s bell tower with its more masculine feel. an islamic influence. the lines are pretty strong and defined. while it is indeed an interesting sight, i like bell towers that are more feminine. those that denote subtle poetry. like that of st. francis of assisi church in dumanjug. 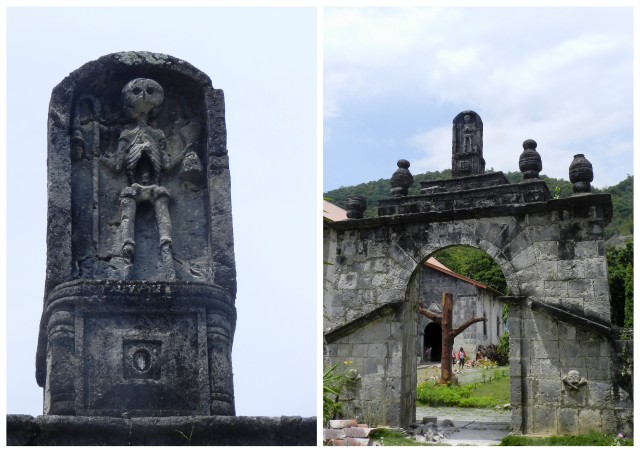 another feature of the church i missed on my first two visits was the cemetery right beside the church. the christian burial ground, whose gates are made of cut coral stones, was opened during the 1760s. it’s no longer used now, for health and sanitation reasons. 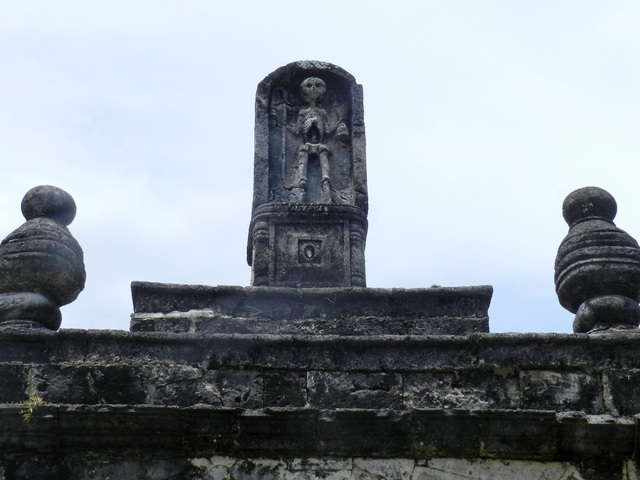 a closer look at the stone relief of a human skeleton on top of the gate reveals that the skeleton is holding what appears to be a cane and a lantern. it’s pretty cool, if you ask me. although i probably wouldn’t say that if i’m stuck in the church’s cemetery grounds at midnight.

on one corner sits a watchtower, one of the series of watchtowers erected along cebu’s southeastern coast which served as lookout points against the moro invaders. there are still several watchtowers standing (some in worse condition than others) but it’s amazing to think of their existence until today. indeed, southern cebu is so steeped in history a trip down there is an education in itself. plus, it’s fun! =)

and then, of course, there’s escuela catolica. a 1940s dormitory for children who were asked to stay the night prior to taking their first communion.

why do i get the feeling that this blog is getting really geeky? lol.