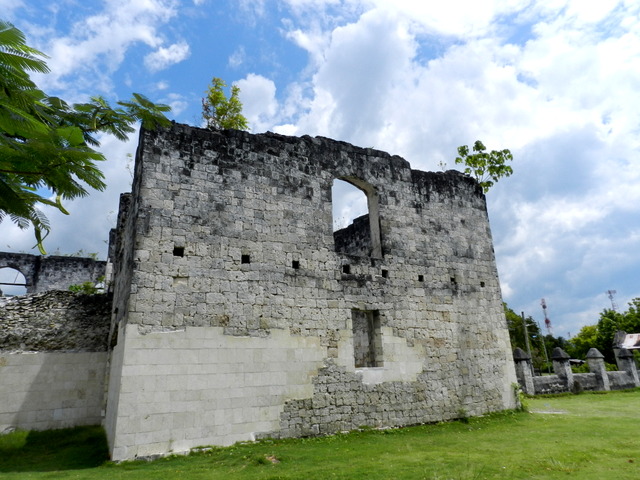 trust me when i say that when traveling to oslob and its church complex, it’s like traveling back into time. the only thing missing are the spanish priests and you in your traditional filipino costume listening to them talk about eternal damnation from the pulpit.

also, trust me when i say that i am this close to drowning in my own inflatable pool of delayed posts and unedited pictures. it’s crazy to want to keep documenting some aspects of my life for grandchildren born to my unborn kids. it’s even crazier that i enjoy writing to them and giving them the impression that i am one cool grandmother in my heydays.

and these are two of their grandmother’s bestfriends since college, soaking in the harmful ultraviolet rays of the august sun while pretending to be cool grandmother’s friends too in what may appear to be an enjoyable photoshoot. not that we didn’t have fun because really, it was a memorable trip. what made it particularly difficult was having to hoist ourselves up to get to that high ledge we were sitting on and to smile for the camera as if we just almost didn’t have a heart attack climbing up there. palpitations and wheezes aside, we’re all about as healthy as a horse.

anyhow, the cuartel. what else can i tell you beyond the description written on its historical marker? it’s all there, i guess. i mean, information-wise.

although what it failed to mention was that the cuartel is poetry in itself. similar to the temples of angkor in cambodia, it gives off that certain kind of vibe that makes you go, “wow!” or at least that’s what it did to me.

you don’t need to take my word for it, though. a lot of things amaze me.  i’m the kind of person who gets amazed whenever i see cars displayed inside malls. i’d be like, “oh, wow! how did they get those cars in here?!”

so, yeah, my fascination for things and places do not really automatically apply to the general population.

but you gotta admit it’s a rockin’ place to visit once in your lifetime if you’re the type who appreciates 19th-century coral stones stacked on top of each other to form a cuartel for the spanish armies. and the fact that it has survived this long ought to blow your mind.

but then again, it’s easy to take for granted if it’s the kind of scenery you see every sunday on your way to church. the locals are probably immune to its existence already. to them, it might be just another structure in their hometown. just another historical landmark sitting there waiting to be noticed by its own people.

i hope not. i hope that somehow, the locals would see the beauty of these structures through the eyes of first-time visitors like me. just maybe a little less psychotic.