the museum is a fairly small room airconditioned to preserve the various articles of clothing that once belonged to the philippines’ most celebrated national hero, dr. jose rizal. there were other rizal stuff there too but all i remember seeing were his decaying clothes and how short his pants were, laid out inside a glass encasement. but, of course, it’s no secret that jose rizal’s height was only 4’11”. just as his numerous affairs weren’t exactly confidential matters. suffice it to say that while he was vertically challenged, so to speak, he wasn’t exactly short on charm and intelligence! 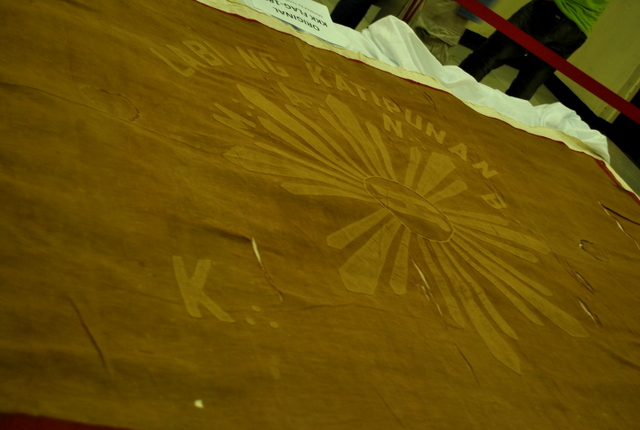 i guess you can say that the highlight of the museum for me was the original KKK flag. and when i say “original,” i mean original. like it was the exact same flag woven in 1896. one and the same. it blows my mind just thinking about it and how the flag, though obviously faded and worn, has survived one hundred and sixteen years, outlasting even the darkest years of the spanish regime.

116, can you believe it?! if that flag could talk, we’d all be on our knees listening to its epic tale of martyrdom. and how, at the end of its story, we would all have a sense of renewed gratitude for the men and women who risked their lives during the bloody philippine revolution just to give us what we have now which they had to fight tooth and nail for: our freedom.

which is why i consider myself lucky to have actually seen this brownish flag with my own big brownish eyes, as it was a one-night only public display. had it not been for gabii sa kabilin, i never would have known that one of the philippine revolution’s precious legacies has been silently sitting here in my city all along.