before all the hype and the rules and the debates surrounding the protection and the treatment of the largest fish in the world, several of whom decided to make oslob, cebu as their playground, we were there.

and by “we,” i mean ram and me, who basically crashed grabbed the opportunity to hitch on the plans of my sister and her friends to go and see these gentle giants of the sea. (no, i didn’t mean for that to rhyme. watching little einsteins with my niece these last couple of days has reset my brain to that of a 3-year old’s, except that the the 3-year old’s can hold information much longer and use it much more effectively than somebody my age can. i may have expanded my vocabulary but the moment i learn them, pffft! gone. just like that.)

so anyway, it rained on and off for days in that second week of december last year. it worried me that the whale sharks mights not show up because they didn’t wanna get wet in the rain and all.

just as it worried me that my photos would end up with… just me. pathetically looking out into the dark and unfriendly horizon wondering where the hell the whale sharks go when it pours.

amphitrite, the goddess queen of the sea and wife of poseidon, from whom spawned the sea’s abundant creatures, had been more than kind. she arranged for the sun to shine upon us on that day, blessing us with a little too much vitamin D, harmful ultraviolet rays, and deliciously itchy red rashes that lasted for five days.

but hey, for these babies, i’ll take those rashes anytime! 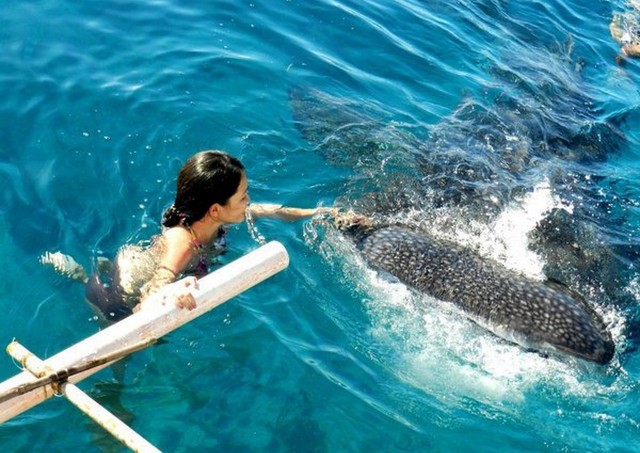 okay, maybe not. but for that one time? let me just say IT WAS ALL f*cking WORTH IT, man! (nevermind that i still carry the countless scars on my arms and legs until now. they’ll fade. in about three years. not that i’m worried, although they look kind of ugly, honestly speaking. if you see me and you notice them, don’t ask. if you do, at least be polite about it. i’ll explain it to you but don’t expect me to talk to you again ever. nothing personal.)

with all my nonsense blabbering as an introduction, i don’t know where to start. like, you know, how did those whale sharks get there? what do they eat? do they eat you? stuff like that. i’m sure you have a lot of questions and you can bet your kidneys i would not be able to answer them in a way that would not insult your intellect.

but for starters, no, they don’t eat humans. well, sure, they can swallow you whole but they probably would not waste their time on junk food. (they’re watching their weight. if you’re dying to know, they’re into plankton. so unless you look like a plankton, fret not.)

and yeah, they may have all these teeth but they’re more for aesthetic purposes than practical ones. instead of going through the hassle of actively biting and chewing, they suck in the water with the plankton and the baby shrimps (and you) in it into their colossal mouths and filter out their food, with the excess water coming out from their gills.

now, we all knew we were not allowed to touch them and i’m sorry (am i?) if i did but that was me incapable of controlling myself from wanting to pet something that i probably might never be able to do again in my entire lifetime.

and that is ram losing his sanity with giddy excitement. lol. i love that boyish look on his face, by the way. that whale shark drove him crazy with happiness he would marry it if he could. (that’s already a great pre-nup shot right there.) haha.

on a serious note, i am aware that there are lots of issues surrounding the industry that the whale sharks have created and you can read all about that somewhere else, but not here.

because being this close to them was one of the best moments of my life.

this blog is about that.