boljoon is a charming old town in the southern part of cebu. famous for its 18th-century stone church which is now considered a national historical landmark because of its, well, historical value, the patrocinio de maria is indeed an ancient treasure in need of a little more attention and a great deal of restoration because it seems to be aging at such a rapid pace.

the first thing that grabbed my attention were the elaborate paintings on the ceiling done by local painters when they weren’t busy defending their town from the muslim invaders who came from god knows where. it has been said that the moros once stole the church’s silver bell, carting off such precious religious commodity into their little boat. their marine vehicle apparently did not make it home, as it sunk in the middle of its illegal voyage because of the weight of the bell and of heaven’s raging fury. 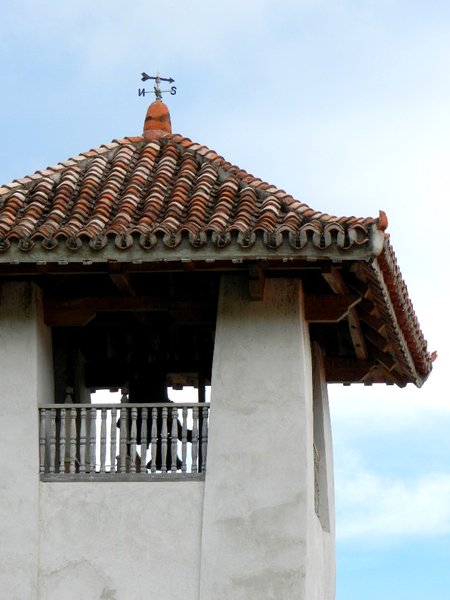 i like the artistic effect that the clay roof tiles give to the overall look of the bell tower. just as i adore that cute compass thingie stationed on top of the roof in lieu of the usual half-rooster that i am more familiar with. i don’t know what that is for, though. i understand some people are educated in reading maps and compasses, as well as in the art of telling time using their bodies in proximity to the position of the sun at the risk of contracting sunburn but i’ve never been one of those people. so if i say that i adore that little compass over there, i adore it not for its practical uses but for its aesthetic contribution.

according to my research, (yeah, i had to google all these information but my brain has never been good at memorization so i had to resort to generalization which implies that i may not be as accurate as i want to be.) what makes boljoon church’s bell tower unique is its shape — square instead of curved — an islamic influence. i don’t know how or why an “enemy’s” style could have such an influence on the church’s architectural preference. if that question was answered in one of the websites google recommended then i must have missed it because i’m too lazy to read the whole thing. hehe. sorry.

anyway, the church’s interior is filled with lots of ornate carving — from the pulpit to the altars — but this one’s my favorite. it’s a wooden stairway leading to the pulpit. that design looks really complicated and having to carve that on hard wood with limited technology and all, i can just imagine the effort and the labor invested to produce such work of art.

of course, they spared no details in the beautification of their altars too: 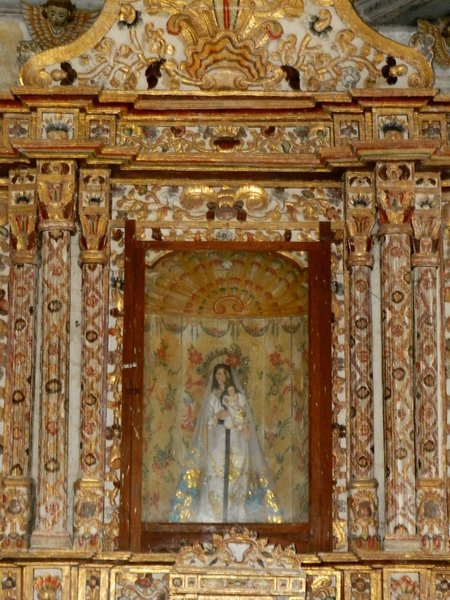 standing at the entrance, the church’s narrow body with its long aisle immediately draws your attention to its main altar which seems to shine like it’s made of gold. but that kind of perception only applies to normal people. because people the likes of me automatically look up, which is why i noticed the paintings on the ceiling first.

this is the pulpit, back in the days when friars shouted everlasting sermons promising eternal damnation in the fires of hell to a crowd of guilty citizens forever repenting for their sins. forgive me if i sound jaded. as much as i believe in Jesus and his teachings, i look at religious treasures made of diamonds and gold and semi-precious stones locked inside heavily-guarded museums and i can’t help but feel a certain disgust as to how the church could have accumulated such earthly valuables while preaching about heavenly wealth. it just doesn’t seem right and i have a problem with that.

on a much lighter note, don’t you just love the contrast between light and dark and gray and green? ‘coz i do. and it’s a very pretty door. it’s the kind of door that stands silent and strong, aware of its own timeless beauty but proud of its wrinkles. i don’t know. it’s just that kind of door to me when i fail to take my anti-hallucinogenic medication.