phnom bakheng was the last temple we visited which was another mountain temple on phnom bakheng. pardon the redundancy of the words. phnom bakheng, when translated to english, means bakheng hill. it’s a no-brainer that the temple was named after the hill it has sat on for god knows how long.

and because it is on top of a hill, you can enjoy the sunset view of angkor wat from far away. from very, very far away. that is, if you even see a glimpse of angkor wat’s towers. i must be myopic, as this was as far as my eyes could see:

my cousin, aleth, who has real myopia and has to wear glasses/contact lenses to correct it, was better at spotting the outlines of angkor wat, just as she had while we were at pre rup! and there i was, with my near-perfect vision, and i couldn’t see a damn thing. is that an abnormality or what?! secretly, i think my cousin needs to go see another doc. a psychiatrist, this time. maybe she was hallucinating the whole thing. lol. kidding. i love her, though. (just as i love the dooney & bourke bag she gave my mom. which i stole. which has now become one of my favorite bags. lol.) she’s a great cousin. we have the same personality — i don’t know if it’s because we’re cousins or because we are both librans. but like i said, i love her. =)

my sunset pic. nothing much to say here. am still scouring the background for angkor wat.

and this is me with my cousin before we began our traumatic ordeal of descending phnom bakheng’s steeeeeeeeeeep steps. i am soooo NOT exaggerating the steeeeep part because at some point, i thought of just deliberately rolling down to my death since there’s a good chance i’d end up doing that by accident. at least i’d be an active participant of an event as significant as that and i wouldn’t feel cheated by fate. 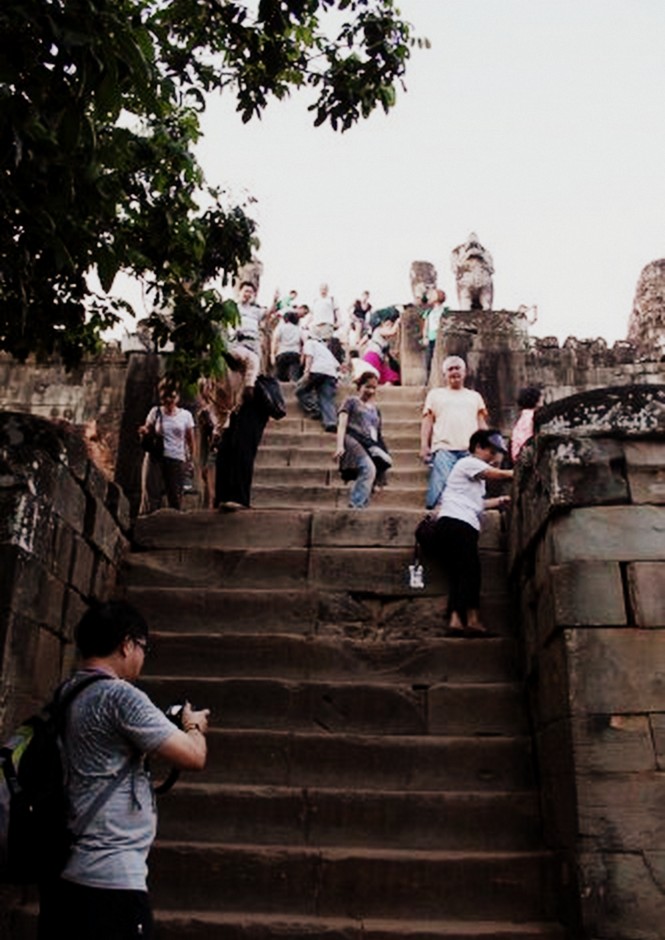 if i was smiling here looking like the climb-down was a breeze, that’s because i wanted my last few photos to show me happy and smiling so i wouldn’t look like a dork in my funeral pics. there’s nothing worse than looking like a dorky dead. lol.

in actuality, this was what we really looked like going down those stairs. not fun at all!