they say you haven’t been to cambodia if you haven’t been to the landmine museum. because the word “landmines” is tragically synonymous to cambodia. the country is practically littered with millions of landmines. millions. cambodians don’t know where they are planted. they only know it’s there when they become the victims themselves.

although siem reap, as well as the other major cities, are cleared of landmines, the rural areas are still faced with the dangers of them. most of the victims are children and rural folks who farm the lands, unaware of the damaging explosives that are very sensitive to the touch. one second you’re just walking. in the next second, boom! you’d be lucky if you lose just your extremities. it could’ve been your life.

Aki Ra‘s landmine museum is a rather small museum which features the hundreds upon hundreds of bombs detonated by aki ra, a former khmer rouge soldier whose bomb expertise he’s using to clear cambodia’s landmines. if you’re very particular about your money’s worth, you might think that the US$2 entrance fee is a little too steep for a museum which doesn’t really have anything much to offer except the showcase of detonated bombs and several tarpaulins narrating aki ra’s story, as well as the specifications of individual landmines.

but beneath the dull-looking facade (unless you’re a bomb freak), you learn about stories that go deeper than the level the landmines were planted on. you’d read about the stories of families torn apart by war, landmine victims struggling to move on, and a country determined to save its own people against the dangerous mementos of a war long gone.

not only that, the proceeds of the museum are used to fund their relief center. so yeah, your $2 goes a long way. 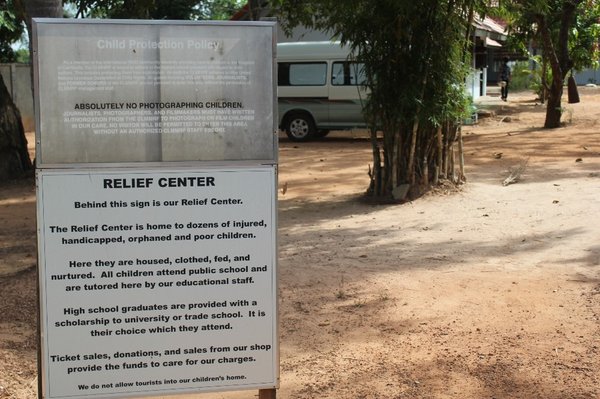 watch. this is a very beautiful video i found in youtube.