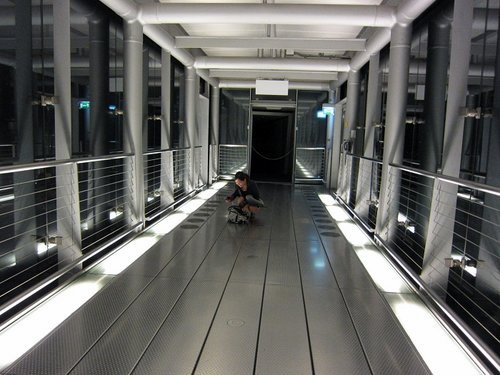 after going through the immigration process in thailand’s suvarnabhumi airport (why aren’t ours as beautiful?) at around 1 in the morning, we took a taxi  to get to the bus terminal where we could catch a bus that would take us to aranyaprathet, thailand’s border crossing into cambodia. but because we don’t speak or read thai (they didn’t even have english translations on their signs!) and the bus terminal was deserted except for those passengers(?) sleeping on the chairs, we kind of didn’t have a choice but to take another taxi driver’s offer to drive us there for 1,800 baht.

the 4-hour drive was exhausting. (worse for the driver. lol.) i was in and out of sleep, scared that he would take us somewhere else and sell us for less than the amount of taxi fare we were willing to pay for. but we got to the thai border safe and sound, waking up to the quietness of the aranyaprathet’s dawn and the distinct smell of their 7-eleven.

the border opens at 7am. two hours too early, we saw a waiting shed and killed time by getting some sleep. or trying to, when a foreigner took it upon himself to entertain us with his stories — of how he has been to the philippines (me: really? it’s a beautiful country. him: yeah, i got robbed there.) and how corrupted he thinks it is, blah blah blah. (yeah, tell me about it.) he was a good man, though. he loved to pet the stray cats walking around the area. he gave me 1 baht so i would have change to go to the public restroom nearby. if i weren’t so sleepy, i would’ve loved to continue chatting with him. but i was just exhausted. all of us were.

had breakfast in aranyaprathet too. in a carenderia-like store selling all these orange-looking food in silver trays. we didn’t know what to choose. so the kind lady offered to narrow down our choices — spicy or not-so-spicy? point is, everything there was spicy. but the food was good. really encourages you to drink lots of water for that healthy thai metabolism! lol.

before we left for our trip, my sister printed out this really long narrative which served as a guide on how to get to siem reap and what to expect along the way, especially in the crossings. obviously, it was written by a westerner who talked about the scams and the scammers who would try to dupe you out of your money or your passport, as well as how dirty cambodia’s border, poipet, is. it was something that would make you change your mind for concerns of hygiene and safety and just about everything else.

well, it was dirty alright. but i was like, “hey, this is so much like the philippines!” lol. so i wasn’t shocked or overwhelmed in the least bit. as a matter of fact, i felt quite at home! haha. it sure was crowded, though, with the cambodians crossing the border to do business in thailand. but they had a separate line for foreigners so we were able to have our passports stamped pretty quick without having to go through the really long lines. what more, if you are a filipino citizen, you don’t even need a visa to go to cambodia! =)

and yes, cambodia is soo much like the philippines. right down to the sari-sari stores and the little stalls selling gas in coke bottles on the side of the street. the khmer people even look like us. no kidding.

as for the scams, well, maybe we didn’t get scammed because we looked like scammers too. (what’s up, bro?) lol.