took another bus trip to victorias after that uneventful visit to manapla. me on a quest to get to our next destination; ram on a lookout for something to eat somewhere. so against my travel principle (do not eat in a place that you can find here in cebu.), i settled for a quick lunch at mang inasal in victorias. where their chicken and soup tasted exactly like the mang inasal we have here. no difference at all. probably a national recipe or something. ho-hum.

but i loved the bus ride, though. because it was bumpy as hell and i must have laughed so hard enjoying the moment. i didn’t care if the other passengers noticed. let them talk. it’s not everyday that i get to pretend i’m on a mini-rollercoaster ride. i even invited ram to join in my momentary insanity. the game was simple. he just had to raise both his feet up, hold on to the backrest in front of us, and go with the bumpy flow. taking pleasure in the feeling of our asses going up and down the air. yeah, i can be crazy like that. but it was fun.

took another tricycle ride that would take us to victoria’s milling company because according to my itinerary, that’s where we could find the church of the angry christ. not having the slightest idea that it’s one huge compound once inhabited by the workers of the now-defunct(?) milling company. tricycle drivers haven’t even heard about the church of the angry christ! ram said i make a lousy researcher. of which i feel otherwise. because i am a very good researcher, modesty aside. i may not know how to get there but at the very least, i know it’s just there somewhere. which is, ironically, kind of like the way i handle my life. lol.

anyway, we were saved by a lady passenger who was so generous as to serve as our tour guide, explaining how the huge compound once accommodated the staff houses for the milling company’s officers and employees, and directing the tricycle driver on how to get to the church. she even asked us how we came to learn about the church, especially since it’s so out of the way and not everyone knows about it. that nudged my ego a bit, as i proudly told her i did a little research on the internet. cocky, i know, but the main goal was to make ram eat his heart out. a little dessert, perhaps, sweetie? lol.

lo and behold, the church of the angry christ, where a huge mural of an angry Jesus is painted on the altar of the church. uber cool. it kind of had that outpost vibe going on, where you feel like you have just been given the privilege to be in a room together with really cool artists and their masterpieces. minus the cool artists, of course, as we were the only people in the church then. but the masterpiece was more than enough. for a minute i even pictured bob marley there. because when i think of artists, i think dreadlocks, weird outfits, and reggae. i don’t know why.

notice how genius-y they painted the holy spirit right where the light from the ceiling shines through? because i sure didn’t notice that until ram had to point it out. and i have the galls to say i’m an art lover! as if! haha. 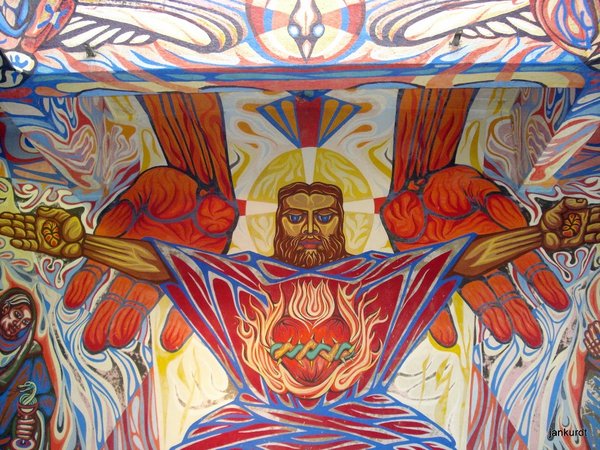 so why is Jesus angry? i don’t know. there was no one there to tell us why. well, there was someone there to officially satisfy our curiosity but his office doesn’t open until 2:00. and we got tired of waiting so we just let it be. 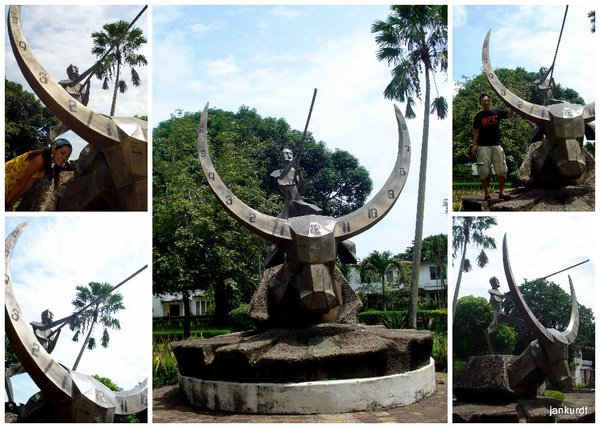 the next coolest thing there was the sundial. because i have never seen a sundial before. and it blew my mind away on how the architects or engineers made it so that it was in the right place at the right angle at the right distance at the right everything just so the shadow created by the sun would be converted into a natural clock that would give people a general idea of what time it is. pure genius transformed into another amazing work of art. i can’t help but be amazed.

just as ram can’t help but be amazed of my ingenius stupidity sometimes, which shows on the look on his face. like when i innocently asked him, “unya ga, dili ka makahibaw sa oras igka gabii?”

of which he lovingly replied, “SUNdial gani!”

awww… the dude loves me. lol.