all those stuff you hear about how perfect Singapore is is quite true. it’s clean, it’s safe, it’s everything the Philippines isn’t. however, perfect can sometimes be boring. and admit it, we all want to hop on and off public transports at our whims — even if it means risking getting run over by an incoming truck when we get off in the middle of the street. there’s so much fun at the thought of getting killed and not being killed at the same time.

it was my first time to travel to Singapore. an international travel at that. well, i’ve been to Saipan before but Saipan was basically Philippines in a way. everyone was speaking to everyone in tagalog. and everywhere you see, you see filipinos. so much for “international” travel. but with singapore, it was completely different. you have to ask questions in english. but it’s not actually the american type of english because singaporeans pride themselves of having the british accent. but it’s not actually british. more like chinese english, if you ask me. at least you won’t have to worry about grammar because people won’t mind them anyway.

we landed at Changi Airport Terminal 2 at around 7pm, which seemed like 4pm to me because it wasn’t as dark as our 7pm here, although we have the same time as Singapore. the sun sets late there, obviously. anyhow, Changi Aorport is huge. not to mention really posh. like a grand hotel or something. there are travellators everywhere — travellators that virtually travel at the speed of light. i guess singaporeans are not the type to dilly-dally. but then again, considering how big the airport is, you need Superman to fly you to your next destination on time. but i’m a filipino. and i love to take my time. so the travellator basically ruined my “leisure” moments. haha. my sister kept pestering me to walk faster, though (she’s not a filipino. she’s an alien. the out-of-this-world kind.) but i couldn’t go any faster than the rate i was going because of my boots, which were starting to kill me. and with the travellators and escalators running at high speed, together with my boots, they were all conspiring to make my death faster. and easier, perhaps. it was like a fucking marathon and i was that amateur athlete on the verge of dehydrating. but at least i’d die looking gorgeous still. that was the whole point of wearing boots during that travel. basically for pictorial purposes. haha.

after setting foot at the lobby and feeling inferior inside the magnificence of the building and all, my sister and i suddenly realized we didn’t know which way to go next. so we decided to follow this old couple who were on board the same flight as us. they were really cute, that couple. they were probably in their 60’s or 70’s but you can bet your passport they were world-class travellers. they certainly knew their way around Changi, albeit they walked rather slowly. the old lady walked faster, leaving her husband a few feet behind her. now that’s what i call love in the old age! hehe. but they were cute, though, in a way. so anyway, we followed them and we finally reached the immigration counters where immigration officers ask you how you got lost in their country and how long it would take for you to find your way back to God knows where you come from. an unexpected tour of Changi soon took place as we tried to get out of there and get ourselves a taxi to my sister’s friend’s place at Eunos. had to make a quick stop to the restroom and found this: 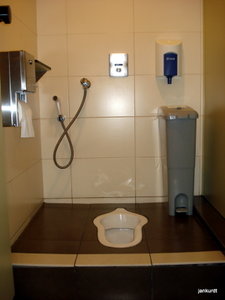 sure, it’s not your typical restroom but it’s what they have. so i basically had no choice but to pee right there. remember the toilet issue during the China Olympics? this must be what all the fuss was about.