“I’m in Melbourne already!” my cousin, Ruth, texted who flew down from her beloved Sydney to spend easter with us last year.

Her estimated time of arrival was 0700. We left the house around the same time, leaving her to the mercy of airport internet, charging stations, and a bit of leg room to stretch and maybe nap a bit. We were going to be an hour late in picking her up.

And thus, began our trip to The Grampians, a national park in Victoria located in the, um, Grampians region. 294 kilometers from where I live. Almost 4 hours of driving which wasn’t really all that bad. Partly because the roads were smooth and the views were pleasant. Mainly because I wasn’t the one driving. My sister was. 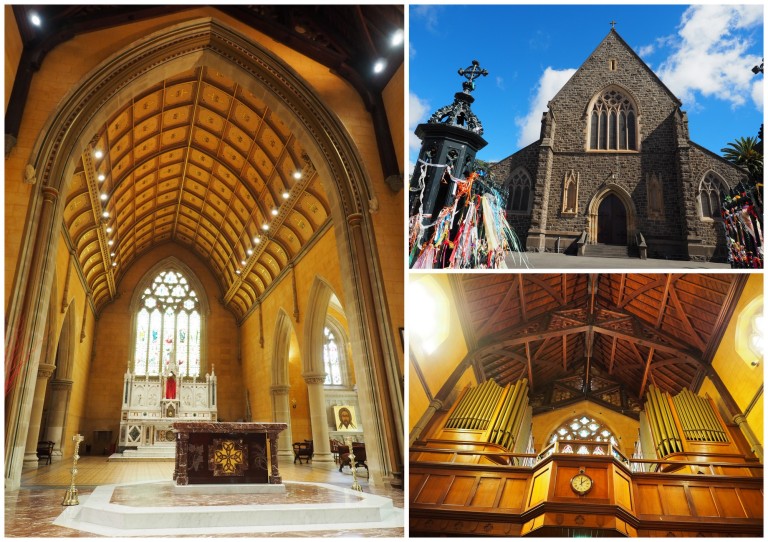 As it was easter and all, Ruth insisted on stopping by a church — any church — along the way, lest she goes to hell like the rest of us non-practicing Catholics she was going on a road trip with. And so with google’s help and Ruth’s desperation, we found one in Ballarat. St. Patrick’s Cathedral, it was called, a church built between 1857 and 1871 with a gothic facade. (Sadly, the church had recently become the face of clergy abuse, as well.)

Architecturally, the church was beautiful. I love old churches. Always have. Always will. I like that feeling of being transported back into time. Of standing precariously still between now and then. It’s trippy.

And I’m a sucker for hardwood. As a Filipino, I have been influenced by the Spanish way too much, especially when it comes to interior design. I was one of those nerds caught spellbound at the sight of ancestral houses. It goes without saying that I visited a lot of those back in the Philippines, too. I’m weird like that. But like I said, I reckon wood is one of those elements that transcends time. Like a living, breathing creature. Capable of storing memories and energies and reflecting them all back to you if you open yourself up to it. Stuff horror movies are made of.

One of the features of St. Patrick’s Cathedral were these majestic pipe organs standing on the church’s balcony. Like a pair of guards looking out over everyone when the eyes of the angels on the stained glass windows are blinded by the glare of the midday sun.

It’s not that I don’t pray. I do. But to my mother’s consternation, I’m afraid I’m not exactly religious. The problem I see with being religious is that it tends to put the devotee on a high horse, judging everyone else below them as if everything is black and white when life is full of gray areas in between.

On this day, I prayed for my family near and far, like I always do — for their good health, safety, happiness, and peace of mind. The same things I pray for over and over again. I notice I don’t really pray for material stuff much. Not that I don’t want it because heaven knows we need a better car. I think it’s because I trust in the universe too much that she will give me everything without me even asking. It sounds cocky but, I don’t know. I believe I am one very special child. You can interpret that any way you want. 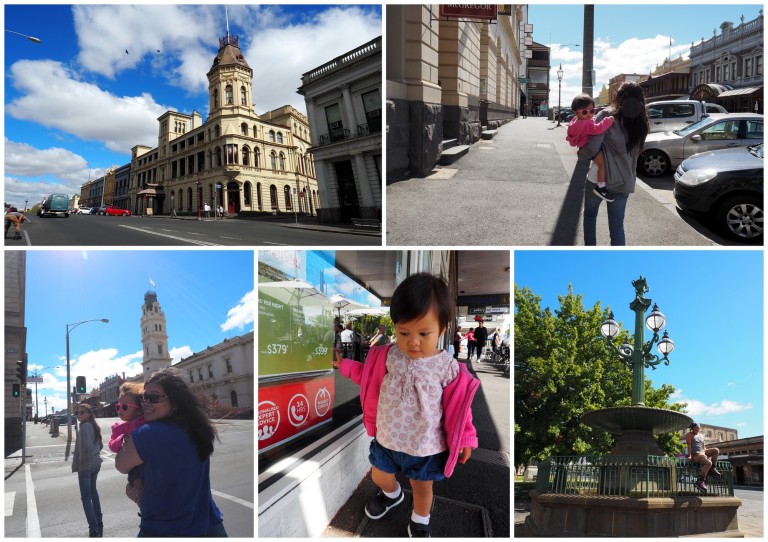 As it was an impromptu stopover for us, we didn’t really know where to go for lunch. None of us had to been to Ballarat before, although I heard it was a charming little place.

The rumours were true. It was, indeed, a charming place. I wouldn’t exactly call it “little” because their town centre seemed big. Well, to me, that is. The streets were flanked with old buildings. Everywhere you looked, you just wanted to stand in front of it and have your picture taken.

We found a Vietnamese restaurant a short walk from St. Patrick’s Cathedral. One of the few establishments open on Easter Day which kind of makes you grateful for different religious denominations because when one religion closes its doors for the day, another one will definitely be open for business. No one starves.

After which, back on the road we went. We were still 2 hours away from our destination.

A word about my sister: Between the two of us, she’s the more adventurous one. The kind you wanna bring to trips with you because she’ll know where to go and is game enough to do things that would make you wanna quickly scribble down your will, just in case.

The kind you wanna hitch trips with and she’d take you on board, albeit reluctantly, because I come with a baby and a husband and sucks for her, I’m her sister.

Aaand, she cooks! I don’t mean your typical burnt barbecue. I mean restaurant-grade stuff. Gordon Ramsay would approve. Look what we had for breakfast the next day:

If I remember correctly, Ruth’s instagram posts were filled with images of these. #campingfood #avoontoast #getinmybelly

So, yeah, if not for her adventurous nature, you’d definitely want her on your team when it comes to camping. She’s happy to drive too.

However, as perfect as she sounds, there is something you need to know about her as well: She can be a little bit too spontaneous and carefree. She will make you wing it with her and it will exasperate you. But then again, it wouldn’t be an adventure now, would it, if things are sailing too smoothly.

As it happened, she didn’t book us any camping spot like every normal person did months before, knowing that it was a long weekend and every other Australian wanted to get out of the city. She said it should be fine. That we can always find something once we’re there.

True enough, we did find one. But only after driving from one campsite to the next. We ended up at Plantation Campground. It was a free one too! Most of the hippies were there with their campervans and 4WDs, complete with awning tents and what-have-you.

As for us, we arrived in my sister’s Suzuki Liana with a sleeping baby in the backseat and a boot that was filled to the gills. Not exactly camping material, but good enough.

So weeks before, Jeff said he wanted to get popup tents because they were easier to set up. I found and bought one online that was on sale for $75, down from $160 or something. Done.

And so for the duration of the car ride, that bloody thing was wedged between raven’s carseat and her door. Blocking the sunlight on her face, which was good, but it also blocked my sister’s peripheral vision on the left so we all had to look out for cars on that side for her.

Opening it up was easy. Ruth did it with one flick.

Folding it down, not so much. It took Jeff almost an hour to do so. Partly because he was too stubborn to watch the instructional video I searched on Youtube thinking he’d figure it out all by himself. Mostly because it needed another person to hold it down while the other person does all the twisting and folding at the correct points. We all took turns being Person #1. The brunt of the work fell on Jeff who was getting more and more frustrated by the minute who hates it when things don’t go his way.

The whole scene was actually quite hysterical for the first ten minutes. By the 30-minute mark, we were all just about ready to call it quits and chuck the damn thing in the bin.

You can just imagine our sigh of relief when Jeff succeeded in folding the beast and zipping it shut right back where it belonged. The moment he did, we heard clapping. I kid you not. Apparently, our neighbors saw the whole spectacle too — lounging in their camping chairs and watching the drama unfold, metaphorical bucket of popcorn in hand. They all cheered when it was finally over.

Basking in the limelight he didn’t know was on him, Jeff said his parting words to his unperceived audience: “Bloody hell, wrestling a crocodile is easier!”

Needless to say, the said tent hasn’t been used again. But then again, we haven’t gone camping yet since that day so who knows it might stage another comeback?

But enough with the tent. Allow me to present to you the next specimen: my beloved crochet blanket.

Yep, the one Ruth pretty much claimed as her own the whole time we were in the campgrounds. Basing on the photo of her on the left, she modeled it well, I suppose. I promised to make her another one, if only to shut her up about bringing it back with her to Sydney.

It’s my labor of love, that blanket with nothing but double crochets and a bag of scrap yarns that Jeff got for me from Gumtree. It’s the blanket that would hold you close and keep you warm on those cold, lonely nights.

I haven’t crocheted another one for Ruth just yet so I guess she’ll just have to look for a man to do the same job in the meantime.

Speaking of cold, it was freezing out there in bushes! Something I expected but was still shocked to experience firsthand. The whole time I wished for a heater, at least.

And a proper toilet. I kept holding my pee if only to avoid using the public toilets which was nothing more than a pit latrine. I’m whining, I know. But just looking at the hole freaked me out. And it didn’t help that the hole was big enough for me to fall into. Which may or may not be an exaggeration but come on, I’m Asian. I’m tiny. If I were a chocolate, I would be freaking bite-size!

So, yeah, to sum it up, I’m not exactly a camping kind of girl. I’m not high maintenance by any means but I’m a creature of comfort. Why do you think I married Jeff? The dude had a heater.

Yep, that was all it took for love to blossom on those cold autumn nights and I was fresh off the boat from a tropical third-world country.

Enjoy the rest of the pics! 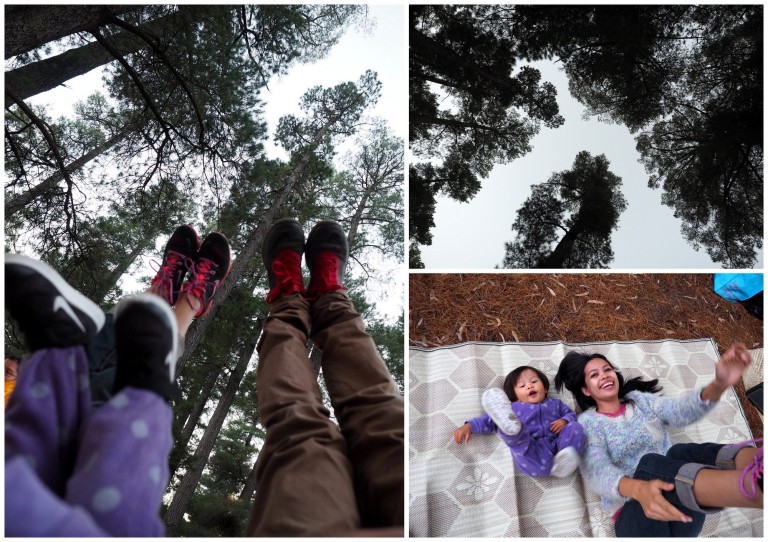 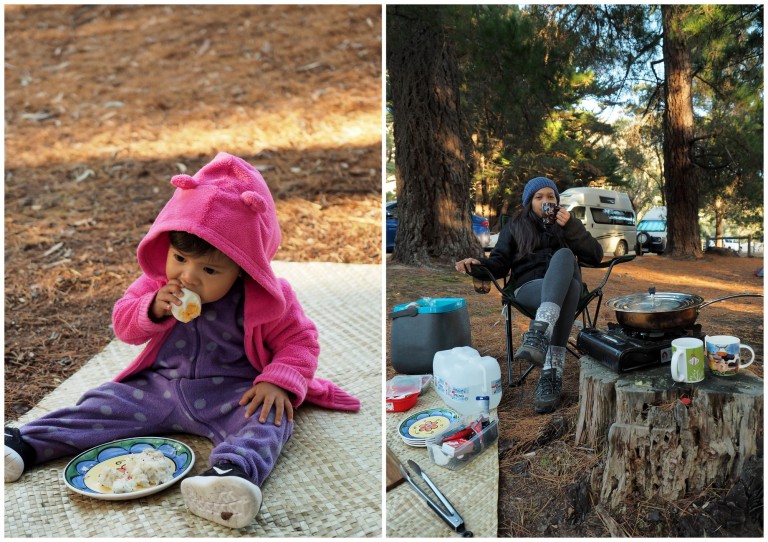 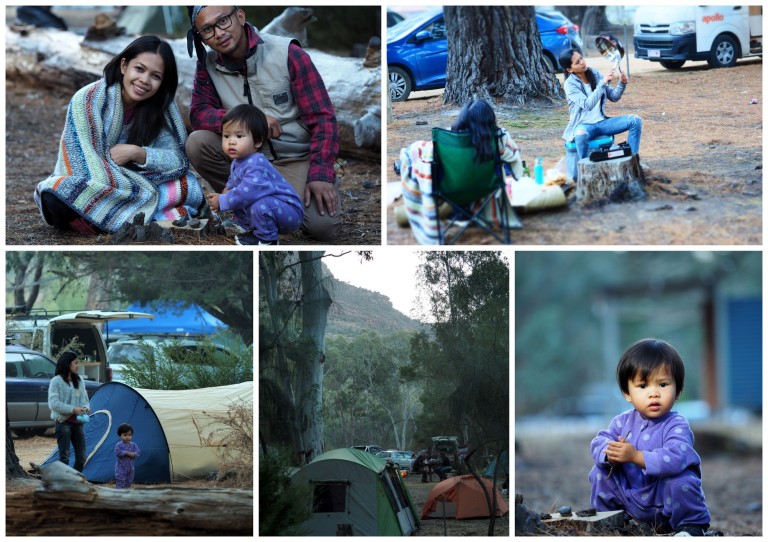 6 thoughts on “The Grampians: Part 1”