“oh, look, it’s 2:22pm and it’s 22 degrees!” tammy said enthusiastically when she looked at her phone just as we were saying our goodbyes.

“no, it’s a good number. i had a wonderful time with you guys,” she replied. and i know she meant it too. she has this sense of genuineness about her. i like that.

“nothing. there are no bad numbers.”

for somebody who’s not exactly into numerology, her answer struck me. not because it downplays the whole concept of this particular branch of knowledge, but because it is riddled with optimism. like, i may have zero idea what the numbers mean but hey, whatever it is, it’s definitely a good one! it’s choosing the brighter side of things and seeing the glass as half-full.

so, yeah, our kids had a playdate at myuna farm last week and it was nice watching them two bond. it trips me out how our girls’ names are from mythical birds — raven and phoenix. life and death. alpha and omega. born a couple of months apart.

whatever the universe has in store for them, i hope they become good friends in the future and be the strength to each other’s weaknesses. a glimpse of which i saw when phoenix was too scared to come inside the bunny coop and raven was at the gate encouraging her, “come, inix, come!”

it wasn’t like raven wasn’t scared at first because she was. it took a bit of coaxing from me to get her to warm up to the bunnies. trying to lead by example by feeding them off the palm of my hand, their whiskers and tiny mouths tickling me a little bit.

if only it’s this easy to be brave for my daughter and to show her that if i can do it, then she can do it too for the mere fact that my blood courses through her veins. but in real life, i’m not always brave. and when she’s a bit older and she asks me to go down a water slide for her, no matter how short, i know i will let her down and she will see that the mother who fearlessly led her to the bunnies is not the same woman who bails on her when it comes to slides.

and it’s not just slides either. there’s zorbing and heaps of other supposedly fun activities that i just cannot recall right now for the simple reason that i wouldn’t exactly know what i’m scared of unless i come face to face with it. anything that has something to do with slides and claustrophobia, i’m out.

although she can always count me in on ziplining. omg, i love ziplines!!! 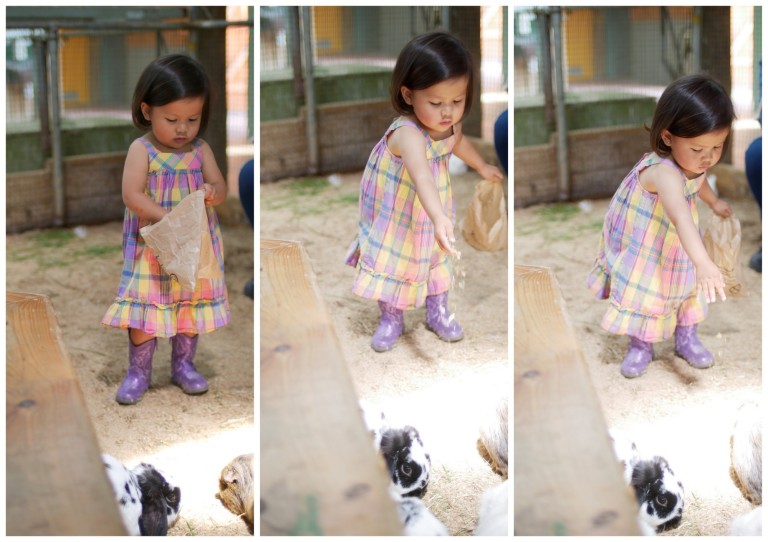 even though she dumped a good portion of animal food on the ground which had all the bunnies scattering toward it, she did well on feeding them with what’s left in the bag. which wasn’t much, really. but still, i’m proud of her for trying. and she looked so cute doing it too that i cannot not post all these pictures of her and her chubby cheeks. it would be sacrilege leaving them to sit in my hard drive just waiting to see the light of day.

someday, she’ll thank me for these. especially for picking the really good ones and not those that her friends can use for blackmail.

i asked jeff if we could have bunnies as pets.

“are you kidding?” he exclaimed. “they breed like crazy!”

that wouldn’t really be much of a problem, wouldn’t it? i mean, we can always give them away to everyone we know. except that i don’t know a lot of people so maybe that would be a problem.

or i can give them to the kids who come knocking on my door for trick or treat? chocolates are too cliché.

across from the bunnies were the sheep, their coats thick and rough like coarse carpet but oh-so-warm. and a bit smelly. had to keep singing bah bah black sheep for her this time to even get her close to them because she was scared.

hands down, i love her version of bah bah black sheep the most. who would’ve known it was actually a ladyboy who lives down the lane? all my life i’ve been singing the whole nursery rhyme wrong. 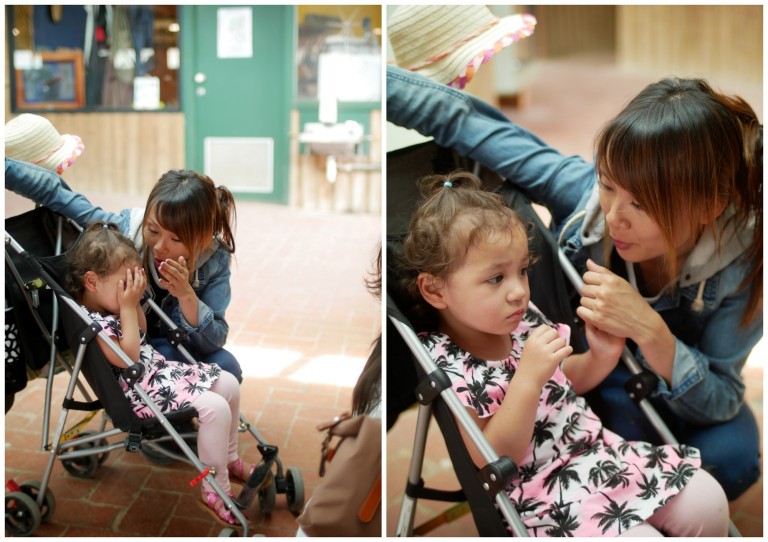 she’d probably hate me for posting photos with her face unblurred (yep, she wanted to be the auntie with an emoji face. lol.) but these pictures of tammy and phoenix are just too beautiful to vandalize. they’re priceless. just like their mother-daughter bond. tammy’s probably the kind of mum you wish you had. a bit unorthodox, but that’s exactly what makes her special. she’s cool.

like, she’s the type of person who makes you go sungazing with her through her window blinds to witness the activation of the lion’s gate portal — a cosmic event that occurs every 8th day of the 8th month when the sun, sirius (our “spiritual sun”), and the earth move to specific points in the sky, opening third eyes everywhere and emancipating everyone into a higher level of consciousness.

i don’t know if it actually opened my third eye because god forbid i start seeing stuff your nightmares are made of but there we were, peering into the sun and staring into its golden circular outline which neither burned nor left any lasting damage to my retina even without sunglasses on. i’ve never sungazed before that. i thought that activity was reserved only for stars.

then again, i’ve never met anyone who reckons my spirit animal is a meerkat. i mean, people have all these different first impressions of everyone but to associate them with spirit animals? that is so tammy!

she’s way younger than me but i feel like i’m learning a lot from her. she brings out the hippie in me and i like it. i’m too boring. 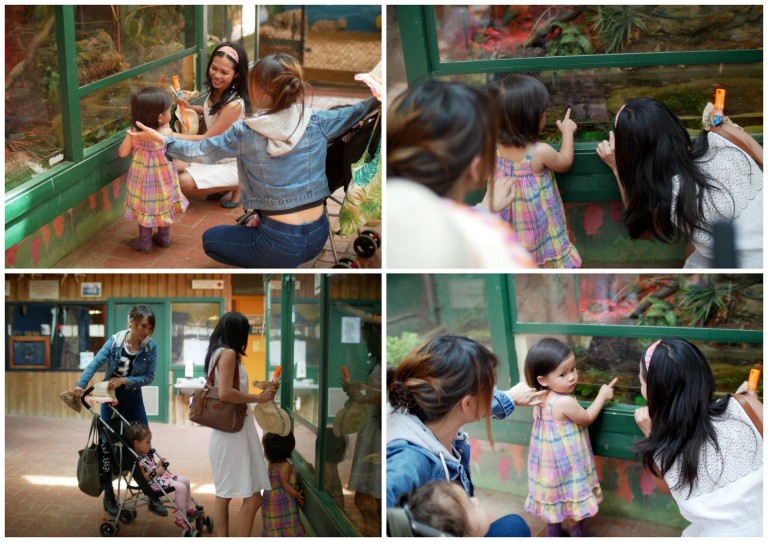 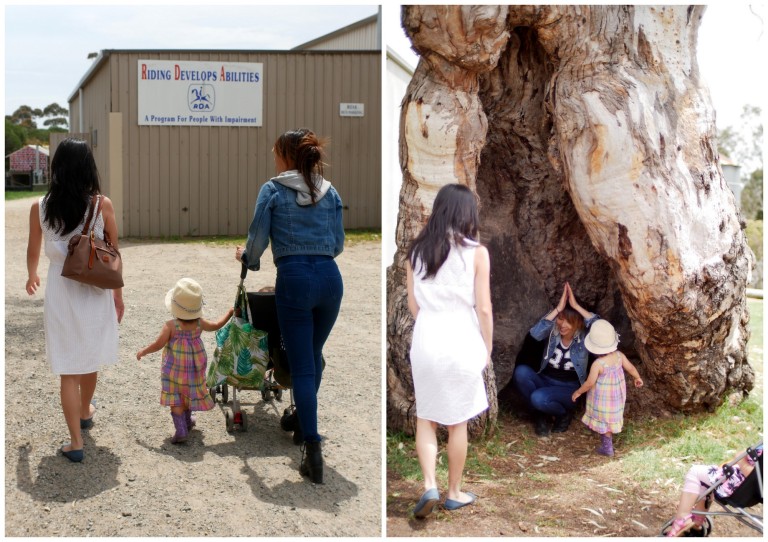 this is probably what i’d look like if i had another kid. i was trying to comfort phoenix and raven while tammy was busy shooing away the chickens that had them scrambling onto the bench in fear.

you should’ve seen it. it was actually quite funny watching tammy chase the chickens away with the stroller.

and when coast was clear, the bubbles became their entertainment.

that, and the snacks tammy brought. and when i say ‘snacks,’ i mean she had mandarins, nectarines, cut watermelons, and whatever else was in her bag which i politely refused because i was still too full from the brunch we had earlier. she pretty much brought the whole fruit shop with her and there i was with not even a bottle of water for raven because i left it in the car!

and it’s not the first time i’ve done it either. nor will it be the last, that much i can guarantee.

but for what it’s worth, it wasn’t like i didn’t think about bringing some snacks for the girls. i did. i swear i did. i don’t know what happened but at least the intention was there. i mean, right?

for an additional fee, myuna farm offers train rides with those blue, pink, and green cars linked to each other and pulled by a tractor driven by a staff for a leisurely tour around the property.

while waiting, raven and phoenix played in them for what seemed like ages. it’s interesting how kids keep themselves preoccupied. i was just there watching raven climbing up and down, and then in and out of the cars, opening and closing the doors, sitting on the wooden benches and then repeating the entire process all over again. and that was it. that was her whole idea of fun.

tammy’s was standing on the side of the car leaning on the roof and doing some form of balancing act on the metal connecting beams in her heels to get from one car to the other. 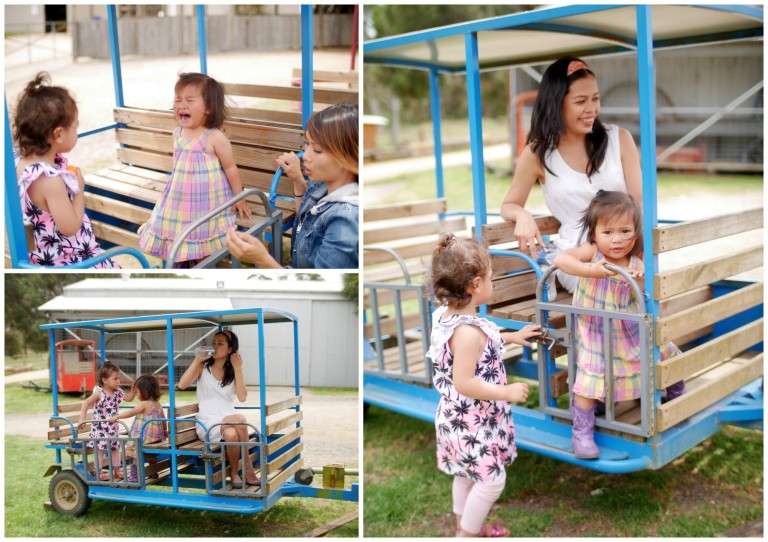 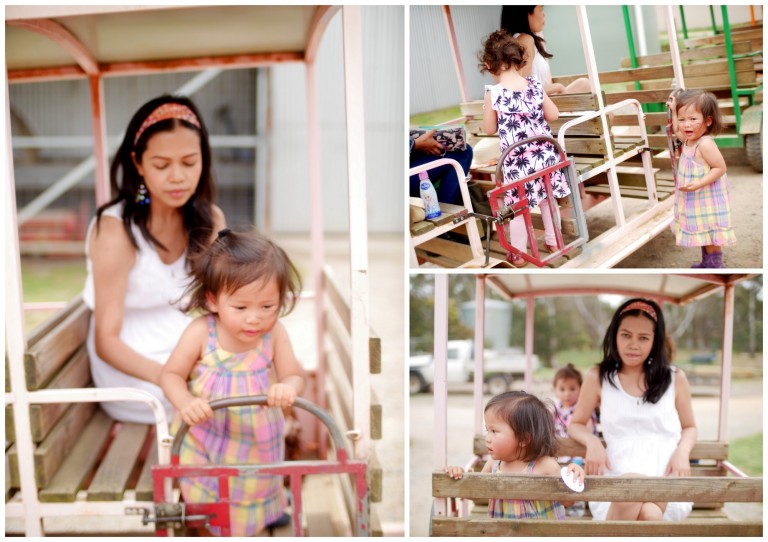 at some point, right before the train ride started, raven had this massive tantrum. she rarely throws one but when she does, oh boy, it’s definitely a test of patience on my part. most of the time, her meltdowns don’t really faze me. i mean, sure, there are moments when i’m just about to throw a tantrum of my own as well but those are few and far between. i have the patience of a saint.

mainly because i just ignore her during those crises while keeping an eye on the physical manifestations she’s outwardly displaying with a flourish to continually evaluate the situation to see if a motherly intervention is needed from my end. also to maintain my sanity.

i know my kid. i know when she’s in real pain that warrants proper attention. i also know when she’s emotionally trying to manipulate me with her big tears and a screamfest.

the same approach applies to jeff when he comes to me complaining of all these bodily pains he’s having. i give him a quick look-over before i make a diagnosis. “if you can still skate, you’re fine.” is my general rule as far as he’s concerned. he tends to be quite theatrical as well. he says i’m savage but trust that this savage will be the one to personally take him to the appropriate medical personnel should the need arise. but he’s still rolling in them skates so…

i don’t know. i guess as a nurse, you just sort of develop this uncanny ability to differentiate the bull from his shit, if you know what i mean.

(to be honest, i don’t know what that means. i just thought it’s a very witty phrase. i’m high-fiving myself as we speak.)

anyway, the reason for the drama? the staff assigned us to sit on the pink cars at the back. she wanted to sit on the green ones at the front that were reserved for the school kids who had their excursion that day.

yep, that was what the fuss was all about. 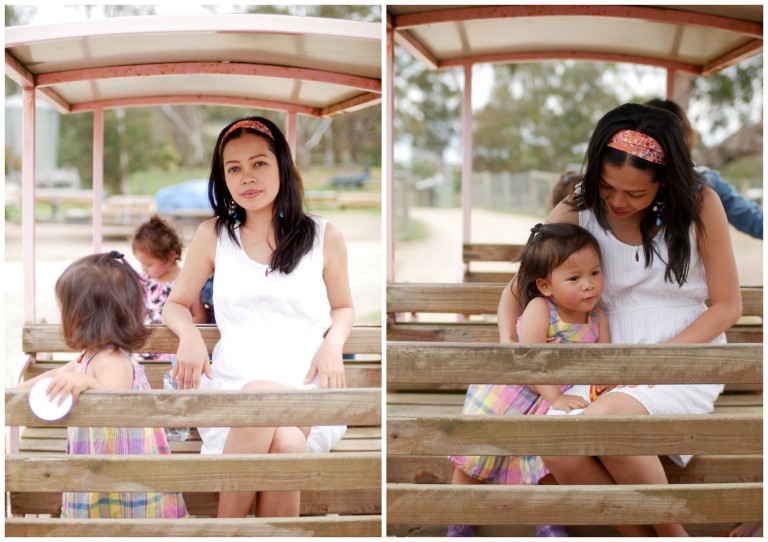 once the tractor’s engine roared to life, everything was back to regular programming. with the tantrum running for what may have been only 8 minutes but felt like eighty, i couldn’t help but sigh with relief.

thank god! now all was well with the world again. 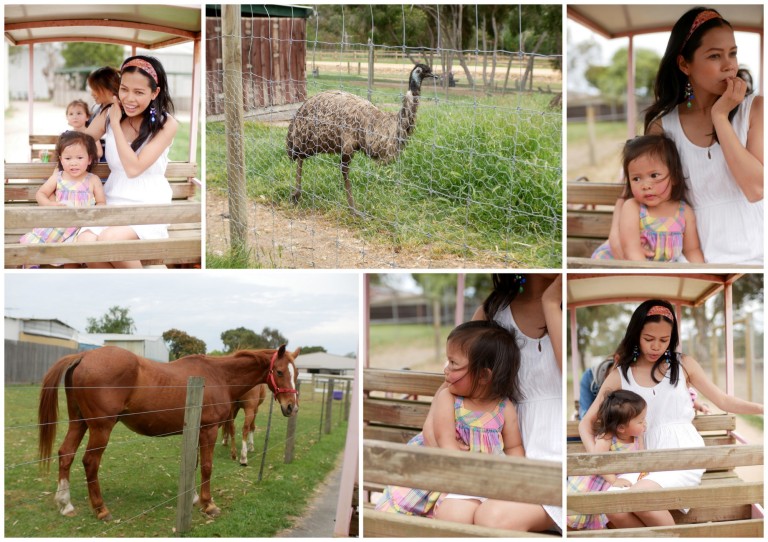 and together, we saw emus and kangaroos and horses and… “look, raven! animal poo!” i said excitedly, pointing to this big mass of excrement on the side of the road.

wait, what animal is that? is that a deer or a reindeer? are they even the same thing?

thus was the ongoing dilemma in my head. how can i teach my kid when i don’t even know them myself?

but then again, such is the paradox of motherhood. you just wing it with love, i guess, and hope for the best. 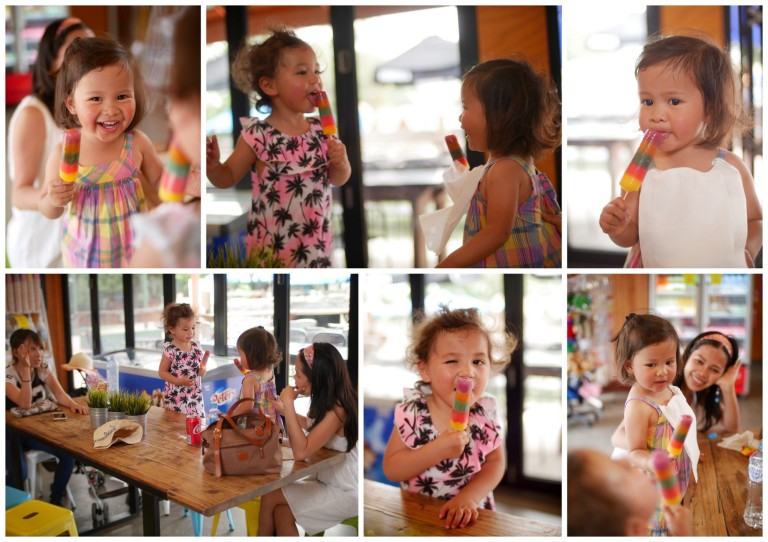 playground and popsicles to cap the day off. as well as chips and chicken nuggets that came with a box of juice that was the kiddie combo meal the farm’s cafe offered. not very healthy, i know. i could’ve gotten her something healthier, like a sandwich with some greens in it, but i would’ve just been wasting money.

and besides, i ended up eating all the nuggets.

2 thoughts on “raven and phoenix at myuna farm”