she was a respected school teacher from the city who wound up teaching in a remote barrio in the province.

she earned it, though, her diploma, having to walk God knows how many kilometers to and from school simply because she wanted to learn. her parents were never really supportive but she persisted. even if it meant collecting leaves as paper and stones as pens. yep, she experienced all that — barefoot.

if everything in this life is pre-planned by some higher being, then everything about her life was meant to bring her closer to the man and to the family she would later have.

he was a local boy who didn’t make it past second grade. but he had the looks, a little spanish heritage in his blood. her family was against their relationship, of course. her father made an impossible demand — to build her a house within 15 days. they decided to break up but later found themselves together once again after a year.

it was in the 1940’s when the first world war broke out. she already had two kids then, with one on the way, dragging them around to hide from the japanese soldiers. she was there when the ruthless filipino officials, by the order of the japanese, hanged him. saw his hands tied around his back, which was then tied to a pole, dislocating his shoulders. it left him with asthma attacks and a jaded spirit. he never talked about the war. in fact, he rarely talked at all. but she got him out of that hell. bribed one of the officials with an unused gun. she brought him home.

for every year added to her life, her wisdom grew.

it was from her that i learned that there are only 3 reasons why couples fight — misunderstanding, jealousy, and money. she values education like any decent and upright teacher would. she’s idealistic but practical. she wouldn’t mind throwing a piece of chalk at her student if it would get him shut up and pay attention — even if that student was her own child. just as she didn’t mind retaining one of her kids because she felt he wasn’t ready yet for the next grade level.

she celebrated her 96th birthday the other day, on the 19th.

she looked so much older since the last time i saw her. she could barely hear. i had to move in closer every time i talked to her. i asked her what life lessons she can impart to me, having lived 96 full years. her words broke my heart:

i don’t remember much about my life anymore. 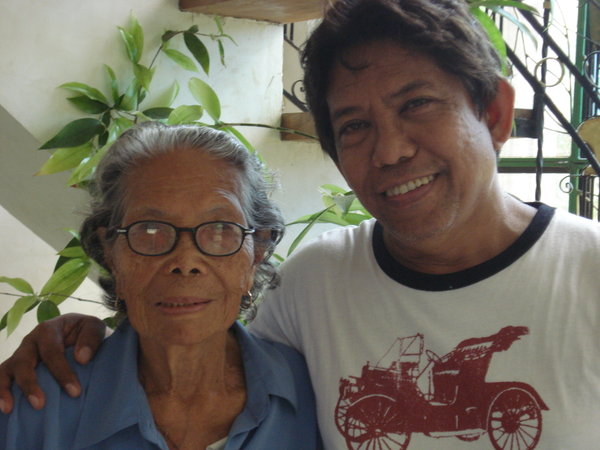